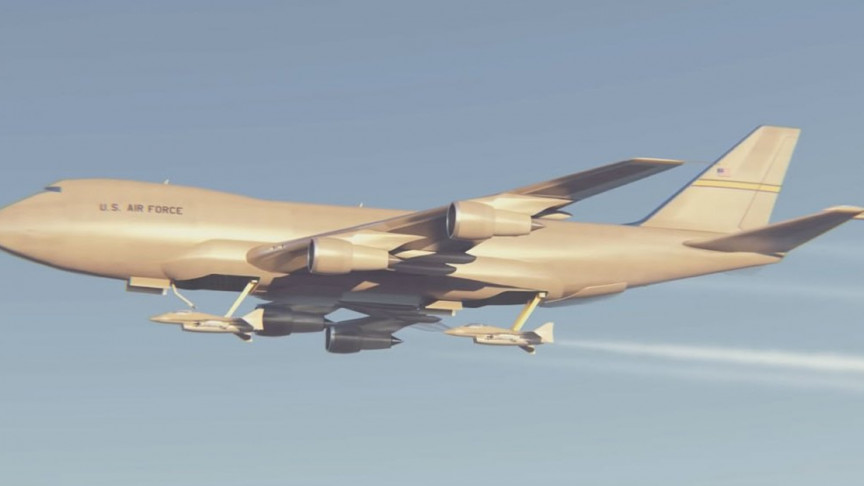 Flying aircraft carriers. Are they a thing of science fiction, or could they become a reality in the not too distant future?

A common feature of sci-fi old and new, like the “Cloudbase” in “Captain Scarlet and the Mysterons”, they have been experimented with for many decades. But the sophisticated ship-killing ballistic missiles appears to have inspired some navies to resurrect the concept.

What is an aircraft carrier?

An aircraft carrier, by definition, is a “large ship that carries military aircraft and a has a long, flat surface where they take off and land”. The bulwark of any modern navy, aircraft carriers tend to fall into one of two main categories: standard carriers and supercarriers.

The latter is effectively a super-sized carrier that tends to be in excess of 70,000 tons. But, it should be noted, the term is not an official military one, rather it’s tend to be used by the media to distinguish them from smaller carriers.

All well and good, but this simple definition does not really do justice to these amazing pieces of engineering. They are not just large, flat-topped ships that carry a lot of airplanes.

Sometimes referred to as “flattops”, aircraft carriers form the backbone of many a modern navy. However, some navies, like the US Navy, have other “flat-topped” ships called Amphibious Assault Ships.

While they look like smaller aircraft carriers, they are actually a very different vessel indeed. In order to explain the difference, let’s take some time to investigate what an aircraft carrier’s main duties are.

Both the vessel and her airwing work as a single fighting unit. They are mutually reliant on one another, with neither being more important than the other.

Effectively being floating airfields, aircraft carriers are required to be at sea for long periods of time. They are often far away from friendly land-based support.

The aircraft carrier, and her fighter wings, are also required to be ready to provide a wide range of offensive, defensive, and support missions. Especially as so-called “bluewater” surface and submarine threats to naval vessels have become ever more sophisticated.

For this reason, aircraft carriers should be conceptualized as more of a single combat system, rather than just a ship. They carry a variety of aircraft to provide support in electronic warfare, vertical replenishment, medical evacuation, combat search and rescue, anti-surface warfare, maritime interdiction, close air support, intelligence, surveillance, and reconnaissance, anti-submarine warfare, and special warfare tasks.

These often require specialized aircraft like the F-18G Growler or the EA-6B in addition to their iconic fighters.

So how are Amphibious Assault Ships different?

These are specially-designed ships that effectively project land power from the sea, rather than providing sea and air superiority – like the classic aircraft carrier. To date, the US Navy operates two types of Amphibious Assault ships; the Wasp-class LHD and the America-class LHA. Other nations have their counterparts too.

These ships lack launch catapults and have a much smaller party of aircraft onboard. Typically, they also rely more on vertical takeoff aircraft like helicopters, rather than fixed-wing combat fighters.

Amphibious Assault Ships lack many of the capabilities of aircraft carriers and must rely on support from their bigger sisters to operate effectively in a combat zone. For this reason, they are nowhere near as capable, as true aircraft carriers.

Is a flying aircraft carrier possible?

With the advent of hypersonic missiles, drones, and alleged specially designed carrier-killer ballistic missiles, some have theorized that the age of the ocean-going aircraft carrier could be going the way of the Dodo. This is because these kinds of missiles effectively provide an “area denial bubble” that renders aircraft carriers vulnerable like never before.

But there could be a way to counter this threat — flying aircraft carriers.

While this may sound like it is straight out of the pages of a sci-fi novel, a lot of research and development has actually been done in the past and present.

In fact, it is not an exclusively modern concept. As far back as World War I, The United Kingdom experimented with the idea.

Back in 1917, an airship, HM Airship No. 23, was developed with the ability to launch aircraft mid-air. Using modified Sopwith Camel bi-planes, several successful launches were actually made.

In the decades that followed, other militaries from around the world began experimenting with their own airship-based aircraft carrier solutions. A notable example was the U.S. Akron-class airship.

Ultimately all of these concepts were dropped in favor of the now-iconic seaborne carriers.

More modern examples in DARPA’s Gremlins program. Developed to provide a means of deploying combat drones from the air, the program conducted a successful launch in January of this year.

The test used a modified Lockheed Martin C-130A cargo plane to launch a Dynetics X-61A Gremlin UAV from its cargo bay. However, the drone was destroyed when its parachute failed to deploy.

This kind of program’s main appeal is that it could provide low-cost deployment and recovery of combat-capable drones into combat zones where traditional aircraft carriers might be too exposed. The idea would be for the cargo plane to launch the drone just outside the enemy’s air defense range, strike the target with the drone, and safely recover it once complete.

All well and good, but what about launching more advanced and capable fighters? As it happens, the United States has also experimented with this concept in the past.

Some notable examples include a modified B-36 “Peacemaker”. Designed as a conventional bomber during WW2, it dwarfed even the mighty B52 Stratofortress still in use today. The bomber never flew an operational mission but was considered for use as a flying aircraft carrier.

The concept saw the bomber carrying several Republic YRF-84F “Ficon” parasitic fighters that could be docked and launched from the bomber’s enormous payload bay. The fighter would be launched, and recovered, using an extendable boom from the aircraft’s underside.

The advent of mid-air refueling eventually did away with this idea.

Another amazing concept for flying aircraft carriers came in the form of the Lockheed CL-1201. An enormous, nuclear-powered aircraft, the proposal envisaged a 5,265 ton, 1,120-foot (340 mt) wingspan, 560-foot (170 mt) long fuselage aircraft that could stay in the air for almost a month and a half.

It would be home to a crew of almost 850, and could, in theory, carry over 20 multirole fighters on docking pylons mounted on its enormous wings. The proposal even allowed for a small internal hanger to carry out repairs and maintenance.

Sadly the concept never made it off the drawing board. But perhaps, the most interesting concept for an airborne aircraft carrier came from Boeing. Meet the Boeing 747 AAC…

What was the Boeing 747 Airborne Aircraft Carrier?

Back in the 1970s, Boeing was approached by the USAF to design and build a special aircraft capable of carrying up to 10 aircraft. The idea was to design a platform that could launch, rearm, refuel, and retrieve several Model 985-121 “Microfighters” in areas of the world where seaborne aircraft carriers couldn’t reach.

The 747 was the obvious choice and had already proven itself a very capable passenger plane, Space Shuttle transporter, and cargo plane. Boeing envisaged converting the design of these enormous planes to hold fighters inside their fuselage and launch them from a specially designed boom deployment system.

Aircraft could also be refueled mid-air and recovered through a small hanger to the rear of the airplane, landing using a special “inflatable skid”.

While simple in concept, the technical challenge of making it a reality was tricky, to say the least. To make it practical, Boeing also proposed specially-designed fighters small enough to actually be contained with the 747’s body.

Apart from the technical challenges of building such a plane, issues like turbulence from the massive planes, and concerns around the fighting capability of the “micro-fighters” ultimately let to the program being canceled.

However, the exercise appears to have set an interesting precedent for the future of aircraft carriers. According to the report, Boeing found the concept of a flying aircraft carrier to be “technically feasible” using the early 1970’s technology.

Of course, the cost would likely have been astronomical.

Could a 747 land on an aircraft carrier?

Since we are on the subject of 747s and aircraft carriers, you may have wondered if large commercial planes, like the Boeing 747, could ever land on one? The answer might surprise you.

Large commercial planes are normally unable to land on the decks of aircraft carriers for one of two reasons.

1. Their wingspan is pretty big. Landing large aircraft like a Boeing 747 or Airbus A-380 would likely result in the wings clipping the island, deck antennae, and other vertical structures of the aircraft carrier’s deck. While there is technically enough room, it would take a very skilled pilot indeed to pull it off – especially during rough weather.

2. The landing deck is far too short to land large commercial aircraft safely. Most of them require at least 3,000 feet (900 mt) of landing roll but, in reality, safe landing roll lengths are usually at least twice as much.

Even the largest aircraft carriers, like the Nimitz-class, provide just shy of 1,100 feet (335 mt) landing distance and are only 250 feet (75mt) wide. While smaller fighter jets need less than this, even they would struggle to land without the specialist landing assist gear (tailhooks and deck-based arresting gear) that most aircraft carriers employ.

That being said, it might just be theoretically possible – given the right conditions. Chris Hadfield, former International Space Station commander, explained in an interview. There are also various flight simulator stunts of this nature on the net too.

But this would be a one-way trip. Taking off again would likely not be possible.

That being said, smaller commercial aircraft have managed to make safe landings on aircraft carriers in the past. One notable example occurred in April of 1975 when the then South Vietnamese Air Force Major Buang Lee landed an O-1 Bird Dog on the deck of the USS Midway during the Vietnamese war.

Whether or not flying aircraft carriers will ever become a reality is anyone’s guess, but they make for very interesting reading indeed.