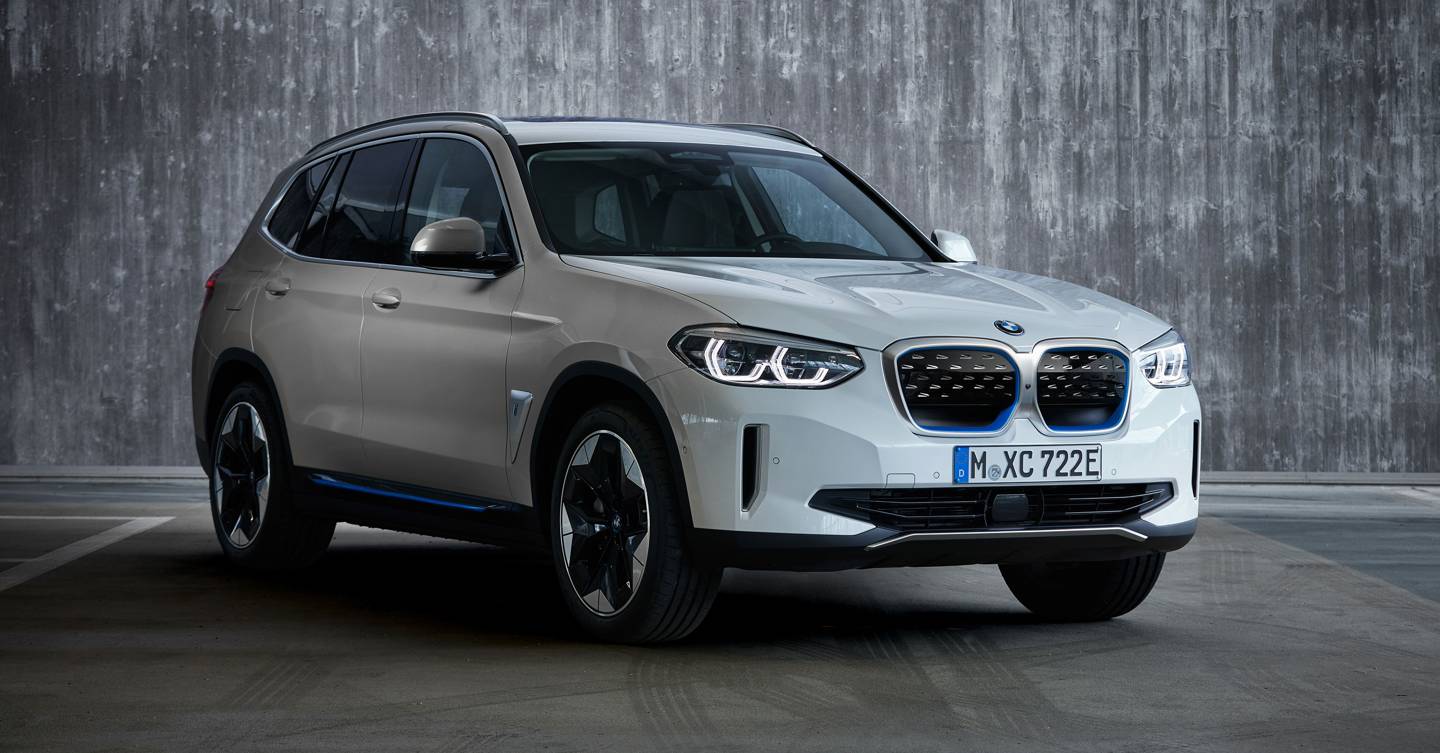 You wait an age for a new fully electric BMW car, and then a convoy arrive all at once. So it is with the German car-maker’s latest zero-emission iX3 SUV. It’s due on the market in Summer just as the Munich-based company prepares to launch not only its i4 EV, but also its hulking new flagship electric iX SUV, unveiled earlier this month.

They’ll all arrive in showrooms nearly eight years after BMW launched its once pioneering i3 – a ground-breaker both in terms of styling and technology. Back then, BMW were leading the electric field. They had their electrified supercar i8 (but with an on-board hybrid generator rather than pure electric) and had also carried out extensive public trials with a fleet of early electric Minis.

There was even a one-off electric Rolls-Royce Phantom. All part of the BMW group. Then, for some unknown reason, BMW appeared to slam on the brakes and let rivals overtake.

Now, with the new iX3, BMW are attempting to move back up the field which they once looked set to dominate. The Government’s revised decision to ban all new petrol and diesel cars by 2030 and electric-hybrids by 2035 – leaving the way only for pure electric or zero-emissions cars – has also helped focus attention.

With two highly specced versions – Premier Edition and Premier Edition Pro priced either side of £60,000 – BMW is entering a busy market with the likes of the Tesla Model X, Ford’s Mustang Mach-E, VW’s ID.4, Nissan’s Ariya and the Skoda Enyaq, as well as Audi’s e-tron, Mercedes-Benz’s EQC, and Jaguar’s I-Pace.

But whereas the early i3 super-mini had a radical look, and the forthcoming iX has that massive cartoonish, polarising grille, the iX3 is one BMW electric car that is unlikely ever to shock.

Its looks are entirely conventional. Apart from the covered grille, the lack of exhaust and some specific trim and exterior tweaks, you’d be hard pushed to tell it from its petrol, diesel and hybrid siblings. That’s not necessarily a bad thing unless you really want to boast about your eco-credentials.

The rear end has also been sculpted to reduce air resistance and aerodynamically designed light-alloy wheels help reduce drag coefficient by around five per cent adding around 6 miles to the range.

But if you do detect a bit of a buzz about the iX3, that’s because it’s the first customer car for which Oscar-winning composer Hans Zimmer has written its ‘soundtrack’ in collaboration with BMW sound designer Renzo Vitale. They give a welcoming chime when you press the Start button, and a farewell tone on switching off. Once underway, driver and occupants of the near-silent vehicle enjoy a strong cinematic sense of rising crescendo as velocity increases. In the future, apparently, it will also warn pedestrians of its imminent approach.

Incidentally, the iX3 is also the first model to be built for export at BMW’s Shenyang factory in China operated by the joint venture BMW Brilliance Automotive.

Out on the road the sprightly new ‘green’ SUV is clearly an authentic BMW – sprinting from rest to 62mph in 6.8 seconds up to a top speed limited at 112mph. It’s comfortable and pretty engaging to drive, but don’t expect a performance focus. It’s for active owners and small families, not would-be racers.

Running on 20in black aerodynamic wheels, the iX3 offers drivers a range of up to 279 miles (on the new ‘real-world’ WLTP test cycle) – which would leave you about 21 miles short, and in need of a top up – on a 300-mile run from London to Newcastle.

The upgraded battery has a gross energy content of 80kWh delivering 74kWh of useable charge. The 188-cell battery is 20 per cent more powerful than existing ones, though, so on a fast DC charger of up to 150kW it will refill up to 80 per cent in 34 minutes. A ten-minute burst will give you 62 miles.

While acceleration is pretty brisk, sporty and engaging, you can also fine-tune your driving style. Pull the drive-lever down to ‘D’ and the driver can choose a high, medium or low brake energy regeneration setting – increasing or decreasing the amount of resistance you feel when you take your foot off the accelerator. The higher the resistance, the more energy you recuperate.

But slide it left into driving position ‘B’ allows you to travel ‘one pedal’ style – with your foot only on the accelerator. Take it off and the intense braking kicks in immediately, boosting energy gain.

In an adaptive setting, the intensity of the car’s brake regeneration can also adjust according to the road conditions using data gleaned from the satnav and the driver assistance sensors. This means it is maximised if you are approaching a junction or a vehicle on the road ahead. But out on the open road, it coasts if you take your foot off the accelerator.

The iX3 is also the first model to offer BMW’s fifth-generation electric e-Drive – which bring the electric motor, electronic systems and transmission into one central unit. The new BMW iX and BMW i4 models will get the same from 2021. However, despite the SUV looks, it is worth pointing out the iX3 is not a 4×4 and is only rear-wheel drive, which is a shame – even if many never use an SUV’s off-road capabilities.

Inside is a fully digital, high-res 12.3in instrument cluster behind the steering wheel and a 10.25in central display with a choice of control via touchscreen, buttons, voice or gesture.

The car’s infotainment system is also compatible with Apple CarPlay and Android Auto, allowing access to digital services such as Google Assistant, Google Maps, music-streaming like Spotify and Amazon Music, as well as WhatsApp messaging.

The new cloud-based BMW Maps nav system enables route arrival times and directions to fast-charging points to be calculated with better speed and precision, while the BMW Operating System 7 allows for the car’s software to be updated over the air.

As with many EVs, the standard equipment package continues to be generous and includes automatic tailgate, adaptive suspension, panoramic sunroof, electric seats, sun-protective glazing, wireless phone-charging, heated front-seats and parking aids. How much longer car companies remain being so generous when they are no longer trying to lure customers over to EVs is another matter.

Order books for the iX3 are open now ahead of first UK deliveries next summer. And prices start at £58,850 for the electric BMW iX3 Premier Edition and from £61,850 for the Premier Edition Pro. By comparison, petrol and diesel combustion X3 models start from £42,115 and hybrids from £49,250 – suggesting an electric mark up from around £16,000 and £9,000 respectively. Other electric variants are likely to follow, though.

One last point worth underlining: due to that higher price, the iX3 does not qualify for the government’s plug-in car grant of £3,000, which is capped at £50,000.