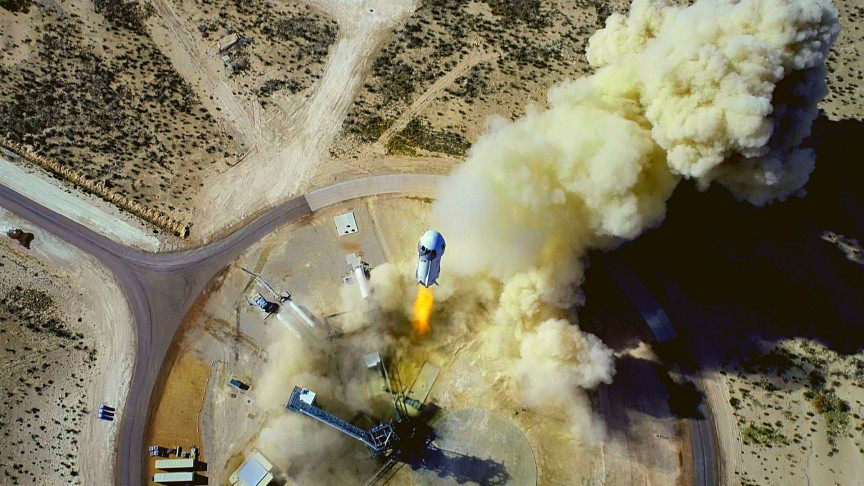 Jeff Bezos’ Blue Origin is upgrading its reusable New Shepard suborbital launch vehicle with a next-gen feature — one NASA is extremely keen to endorse: Redesigning the rocket to include a spacecraft capsule capable of spinning fast enough to simulate lunar gravity.

Blue Origin’s spacecraft will include a giant spinning centrifuge

At one-sixth of the gravity on Earth, the unique feeling of gravitational attraction to the lunar surface is one of several varying conditions in which equipment designed for the moon will need to thrive. But NASA will soon have a new and crucial way of testing technological fine-tuning for lunar gravity thanks to a major upgrade for Blue Origin’s forthcoming New Shepard sub-orbital launch system.

The spacecraft’s capsule will be converted into one giant centrifuge, which will — upon spinning — create a centripetal force for objects inside the vehicle: a “pull” approximating lunar gravity.

Of course, there are other ways to simulate lunar gravity within our scientific grasp, but New Shepard’s upgrade will provide two crucial benefits that put the rest to shame: Larger payload capacity — which will enable new experimental capabilities that no one can presently do amid space restrictions — and longer duration, since New Shepard will offer two minutes of continuous simulated lunar gravity.

New Shepard will achieve this simulated gravity with its reaction control system, according to the NASA press release. This will essentially transform the entire capsule into a colossal centrifuge — targeting 11 rotations per minute.

Blue Origin thinks this novel ability will be ready by 2022 — which is serendipitous because the purpose of simulating lunar gravity on the New Shepard rocket system is to assist NASA’s Artemis program — which aims to return humans to the moon, and even establish a permanent crewed research center on and near the surface of the moon.

“Humanity has been dreaming about artificial gravity since the earliest days of spaceflight,” said Blue Origin’s Director of Payloads for New Shepard, Erika Wagner, in the NASA press release. “It’s exciting to be partnering with NASA to create this one-of-a-kind capability to explore the science and technology we will need for future human space exploration.”

Blue Origin and NASA are also collaborating on the development of human landers for missions to the moon — via a tight-knit coalition that also includes Northrop Grumman, Draper, and Lockheed Martin. But before we can go to Mars, we have to normalize humans on the moon.

With simulated gravity approximating the moon’s, New Shepard will expand suborbital test offerings for both the company and NASA’s Flight Opportunities program. But crucially, experimenting in environments as closely approximating the moon’s is crucial not only for lunar missions, but for eventual crewed launches to the Red Planet — where gravity is slightly more than one-third that of Earth’s.