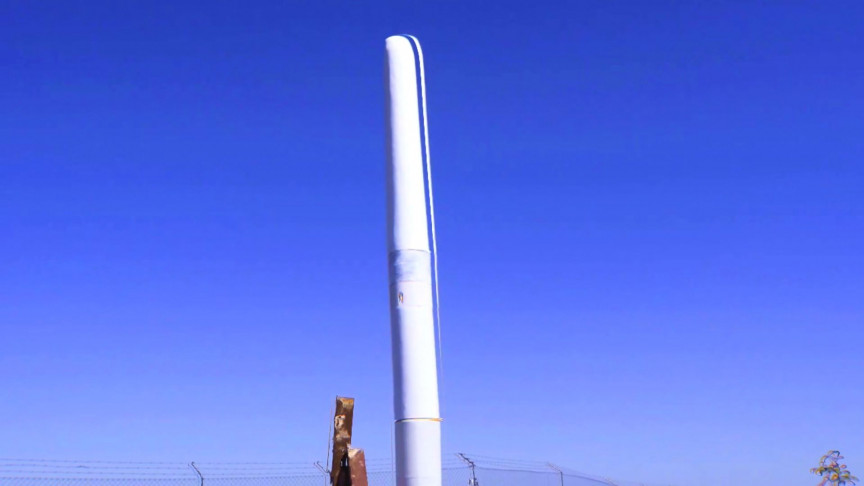 Gigantic windfarms lining hills and coastlines around the world have become commonplace, but there might be another way — a bladeless way — to harness the wind, according to a green energy company that claims to have reinvented wind power by removing turbine towers, blades, and the wind itself.

However, while the six-person startup Vortex Bladeless has published its own study on the new energy-generating design, its proof-of-concept has yet to appear in a peer-reviewed journal — although it is currently receiving funding from the European Union, and a Norwegian state energy company. So, take this arguably phallic alternative to bladed turbines with a grain of salt.

“We are not against traditional windfarms,” said inventor of Vortex Bladeless David Yáñez, in a report from The Guardian. His startup — based in Madrid — has proposed a turbine design capable of harnessing energy from winds without the sweeping white blades everyone associates with wind power.

Many have expressed skepticism on the project’s engineering merits, but Norway’s state energy company — called Equinor — recently placed Vortex on a list of the 10 most exciting startups in the energy sector. Equinor also contributes financial development support to startups via its tech accelerator program, which means there’s at least a market incentive for this project.

The startup’s bladeless turbines are roughly 10 ft (3 m) tall, and take the shape of a curve-topped cylinder affixed vertically with an elastic rod. While uninformed eyes may see wiggling motion in the giant cylindrical object, it’s actually designed to oscillate inside of a wind range — generating electricity from the vibration.

The new design has received interest on Reddit, where it was compared to a colossal sex tory, or “skybrator.” Most people probably just see a phallic shape, which may or may not be why the subject has garnered more than 94,000 ratings and 3,500 comments on the website. One comment intimating that people might find a similar device in a mother’s dresser drawer amassed 20,000 positive ratings from Reddit users.

Bladeless wind power would be virtually inaudible to humans

“Our technology has different characteristics which can help to fill the gaps where traditional windfarms might not be appropriate,” said Yáñez. The energy gaps where Vortex could play a role in urban and residential regions where windfarms don’t appear to be a feasible solution — whether it’s space, or concerns for local flying wildlife. But if it works, the bladeless cylinders could help homes and companies throughout the country reduce energy bills.

In essence, this could be wind power’s response to the home solar panel, according to Yáñez.

“They complement each other well, because solar panels produce electricity during the day while wind speeds tend to be higher at night,” said Yáñez. “But the main benefit of the technology is in reducing its environmental impact, its visual impact, and the cost of operating and maintaining the turbine.”

As suggested, bladeless turbines pose no risk to bird migration patterns or other flying wildlife — especially when used in urban regions. For those living and working in the area, the noise from Vortex’s design would only produce sound at frequencies virtually inaudible to human ears.

Wind power is ripe for innovation

“Today, the turbine is small and would generate small amounts of electricity,” said Yáñez. “But we are looking for an industrial partner to scale up our plans to a 140 meter (560-ft) turbine with a power capacity of 1 megawatt.”

However, there are other novel proposals surrounding wind turbine technology.

Recently, the Technical University of Denmark (DTU) proposed a different wind turbine blade concept that “has the potential to significantly reduce the yearly cost of wind energy.” Called SmartTip, the new design could ease carbon outputs by “millions of tons of CO2 each year,” read the blog post.

We can’t say whether Vortex Bladeless’ design will ultimately succeed from an engineering viewpoint, but endorsement from a Norwegian energy company puts confidence at least above zero. But one thing is certain: wind power, like every other form of power generation, will continue to evolve to meet the changing demands and situation of the global energy market, to press forward the advance into sustainable solutions.