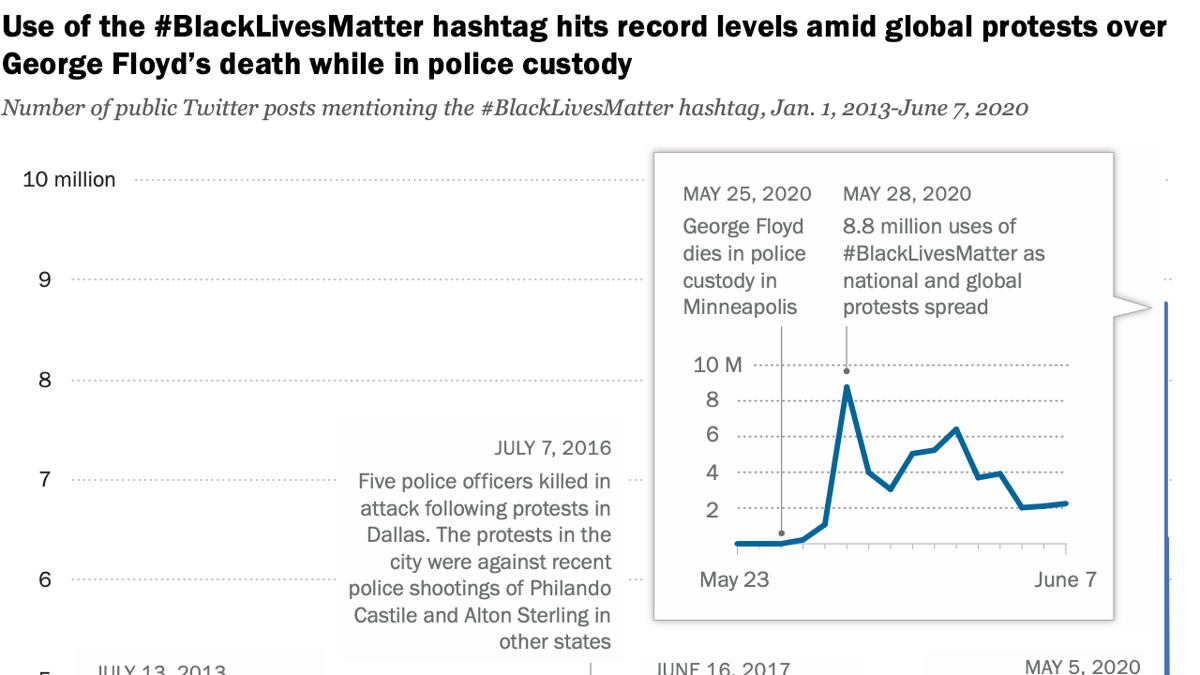 On May 25, George Floyd—an unarmed Black man—was killed in police custody. Since that day, millions of people around the world have risen up to protest police violence and support Black lives. The Black Lives Matter movement has gained national attention as a result, and the #BlackLivesMatter hashtag has been used 47.8 million times on Twitter from May 26 to June 7 2020. That’s just under 3.7 million times per day! (Check out the full chart below.)

According to the Pew Research Center, 218,000 tweets contained #BlackLivesMatter just one day after Floyd’s death. Protests started in Minneapolis, and bystander videos went viral on social media, so by May 27, the hashtag had been used more than 1 million times. It peaked on May 28, used in nearly 8.8 million tweets, and remained above two million uses per day through June 7.

How did we get here? Pew conducted two separate reports to create a timeline.

Usage of the #BlackLivesMatter hashtag begins in July 2013, when the phrase is first coined as a reaction to George Zimmerman’s acquittal in the shooting death of Trayvon Martin. Then usage of the hashtag first picks up in November 2014, during the Ferguson Uprising in reaction to the acquittal of officers involved in the killing of Michael Brown.

The hashtag’s use spikes again in July 2016, when five police officers were shot and killed during a Dallas protest against the police killings of Philando Castillo and Alton Sterling. The #BlackLivesMatter hashtag is tweeted nearly 500,000 times a day over a 10-day period that summer.

The phrase doesn’t go viral again until May 2020, as a reaction to the video capturing the February shooting death of Ahmaud Arbery. #BlackLivesMatter is tweeted 86,000 times on May 7, two days after the video emerged. Just a few weeks later, George Floyd is killed, and bystander video is released during the COVID-19 outbreak. With millions of people stuck at home, the internet—and streets—erupt in protest.