Birth of a Star: Scientists Create a Realistic Simulation 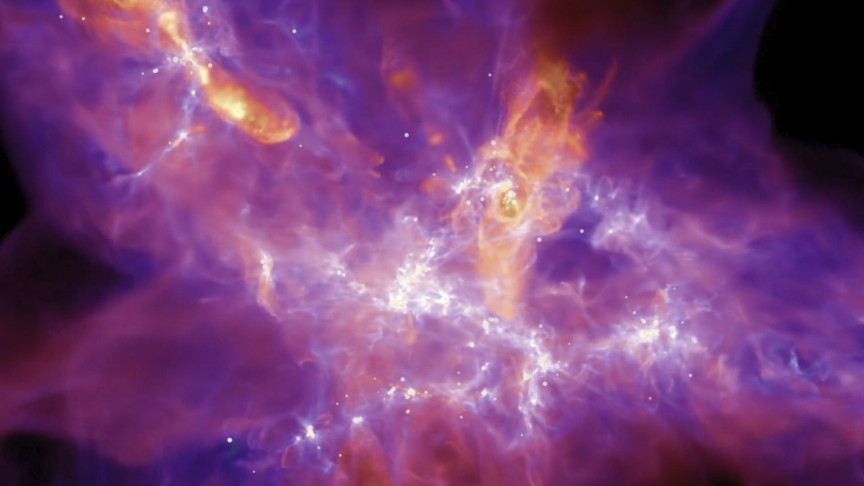 Stars, those brilliant points of lights in the sky, have enchanted humans since we first looked upon them with imagination. From campfires lit by distant gods to turbulent balls of nuclear energy, our understanding of these stellar objects has come a long way. Stars play a critical role in our current understanding of the universe. They have such importance that some astronomers refer to this as the Stelliferous era.

Affectionately known as STARFORGE (Star Formation in Gaseous Environments), this virtual laboratory allows astrophysicists to simulate an entire gas cloud for the first time, giving scientists a more nuanced understanding of star forming nebulae. STARFORGE is capable of simulating a cloud tens to millions of times more massive than the sun, making it 100 times more powerful than previous simulations. In the past, scientists had to simulate a small corner of a star forming nebula, but the power of STARFORGE gives scientists a much larger picture.

Additionally, STARFORGE is capable of modeling how solar winds, radiation jets, and supernova shock waves affect the gas cloud’s collapse and the development of the newborn stars within. Previous simulations could model some, but not all of these physical interactions, whereas STARFORGE can model them at the same time.

STARFORGE also has a very high resolution, being capable of simulating details to a few tens of astronomical units (AU), which allows researchers to have a better view when studying star formation as it relates to various delicate and complex interactions between forming stellar bodies and larger environmental feedbacks. Researchers hope STARFORGE can help to answer some questions about stars such as “why do stars form in clusters”, “how do these clusters assemble,” “why do stars form in clusters, and how do these clusters assemble,” and “why do stars have the masses they do.”

Size is everything if you’re a star

One of the most critical details to know about a star is how massive it is. A star’s mass will determine what type of star it is, its lifecycle, the kinds of solar systems that can form around it, and the kinds of influence it has on its galactic neighborhood. Stars take tens of millions of years to form, and often do so obscured by dust, so it has been challenging for astrophysicists to understand this critical period in a star’s life. Whenever we view star-forming nebulae, we are basically getting a snapshot of the process almost frozen in time. Simulations, and their ability to condense time to a scale that’s useful to astrophysicists, offers useful insights into this volatile world. We can compare the outputs from our simulations with multiple star clusters and star forming nebulae to see if the simulation matches our reality.

“People have been simulating star formation for a couple of decades now, but STARFORGE is a quantum leap in technology,” project co-leader Michael Grudić of Northwestern University said in a statement. “Other models have only been able to simulate a tiny patch of the cloud where stars form — not the entire cloud in high resolution. Without seeing the big picture, we miss a lot of factors that might influence the star’s outcome.”

STARFORGE incorporates computational code from many different physical interactions, including gas dynamics, gravitational influences, magnetic fields, temperature changes, and outside influences from the stellar environment. All of this calculation requires some serious computational firepower, so the team turned to one of the most powerful supercomputers in the world, operated by the Texas Advanced Computing Center and supported by the National Science Foundation. Even with the help of the supercomputer, a single simulation could sometimes still take three months to run; but that’s better than waiting ten million years.

One of the key questions researchers hope to study is the initial mass function (IMF). This is simply a mathematical function that predicts the initial distribution of masses after a star forming episode. When modeling a population of stars, you can start to make predictions about what we can expect to see as the stars age. The IMF is one of the most important factors astronomers can use when studying a large number of stars. The IMF determines a star’s color, lifecycle, and luminosity. The IMF also helps astronomers estimate how many small non-stellar objects exist, how chemically rich a galaxy is, and how many stars in a galaxy go supernovae. Some scientists believe there is a universal IMF, but others are more skeptical and believe the IMF is more sensitive to regional differences.

STARFORGE is already helping researchers push the boundaries of what we know. When researchers ran the simulation without accounting for solar jets, the resulting stars were much larger on average, producing stars about 10 times the mass of the sun. When these powerful jets were included in the simulation, the resulting stars were more realistic, producing stars on average about half the mass of the sun.

Astrophysicists will still continue to probe the nature of stars. Even though there is a lot we’ve learned about stars in the last century, there is still plenty of mystery left. In this age of the universe, stars are the master painters that give our galaxies texture and energy. We’ll continue our march onward to better understand our universe and hopefully, STARFORGE can be a tool we use in pursuit of that dream.