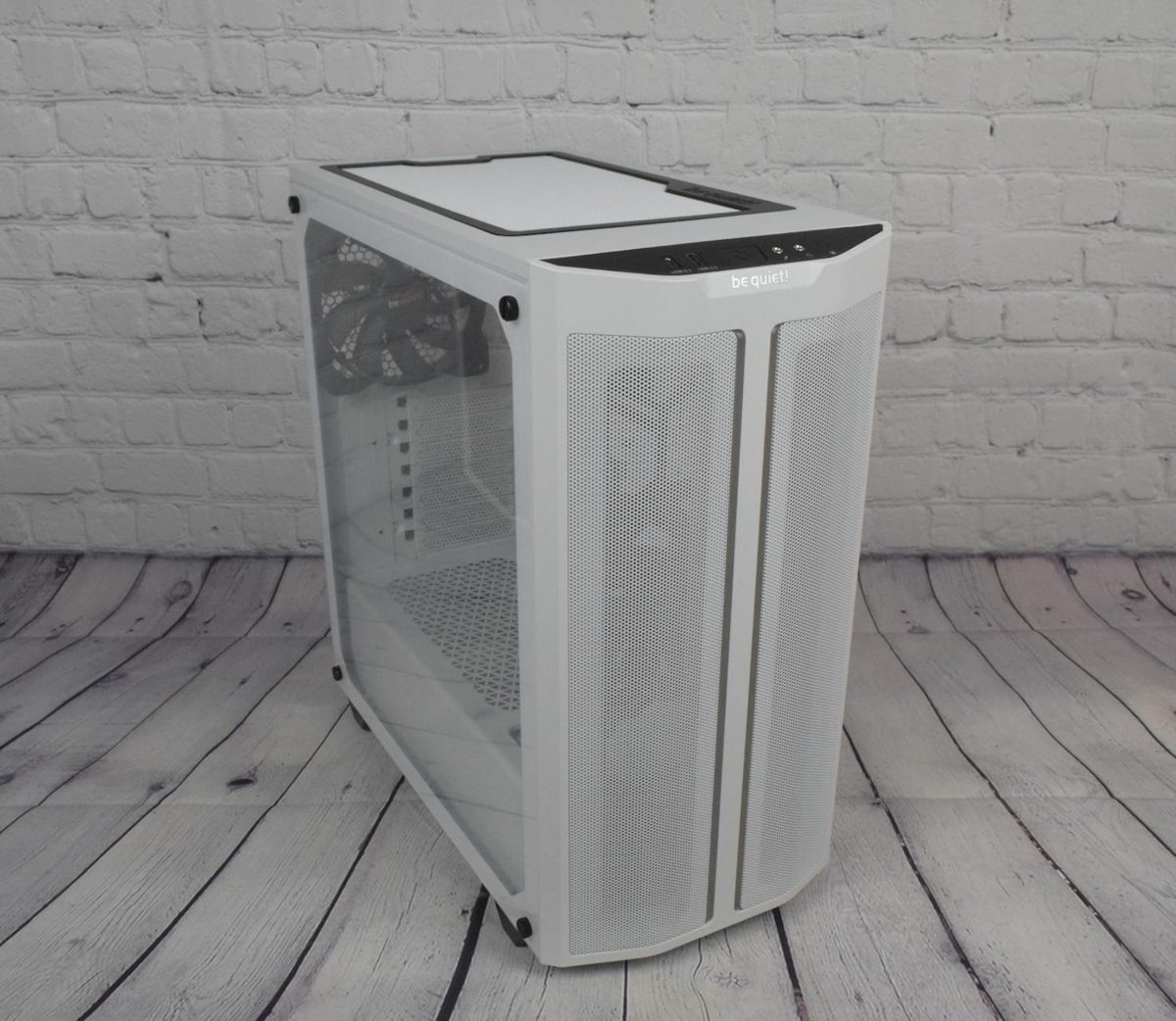 Be Quiet’s Pure Base series of computer cases have thus far been quite aptly named. Previous entries in the Pure Base product line have been mostly subdued and bland-looking, without much to distinguish them at first glance. But each, nonetheless, has been a solid-if-vanilla foundation on which to build your desktop PC, a blank slate without a lot of extras. The newest entry in the line, the $99.99 Pure Base 500DX, changes this up by sporting the option for a flashier exterior, plus generous interior airflow regardless of the look. Only a ho-hum I/O panel keeps it from top marks.

The Design: Be Quiet Turns It Up

Be Quiet offers the ATX-form-factor Pure Base 500DX in two colors, but I’d say the white model I received for review looks notably better. As you’d expect, it’s predominantly white, but it’s trimmed in black at the bottom and top, which helps to enhance the overall appearance. The black model looks nearly identical, but it is entirely black without any contrasting trim. 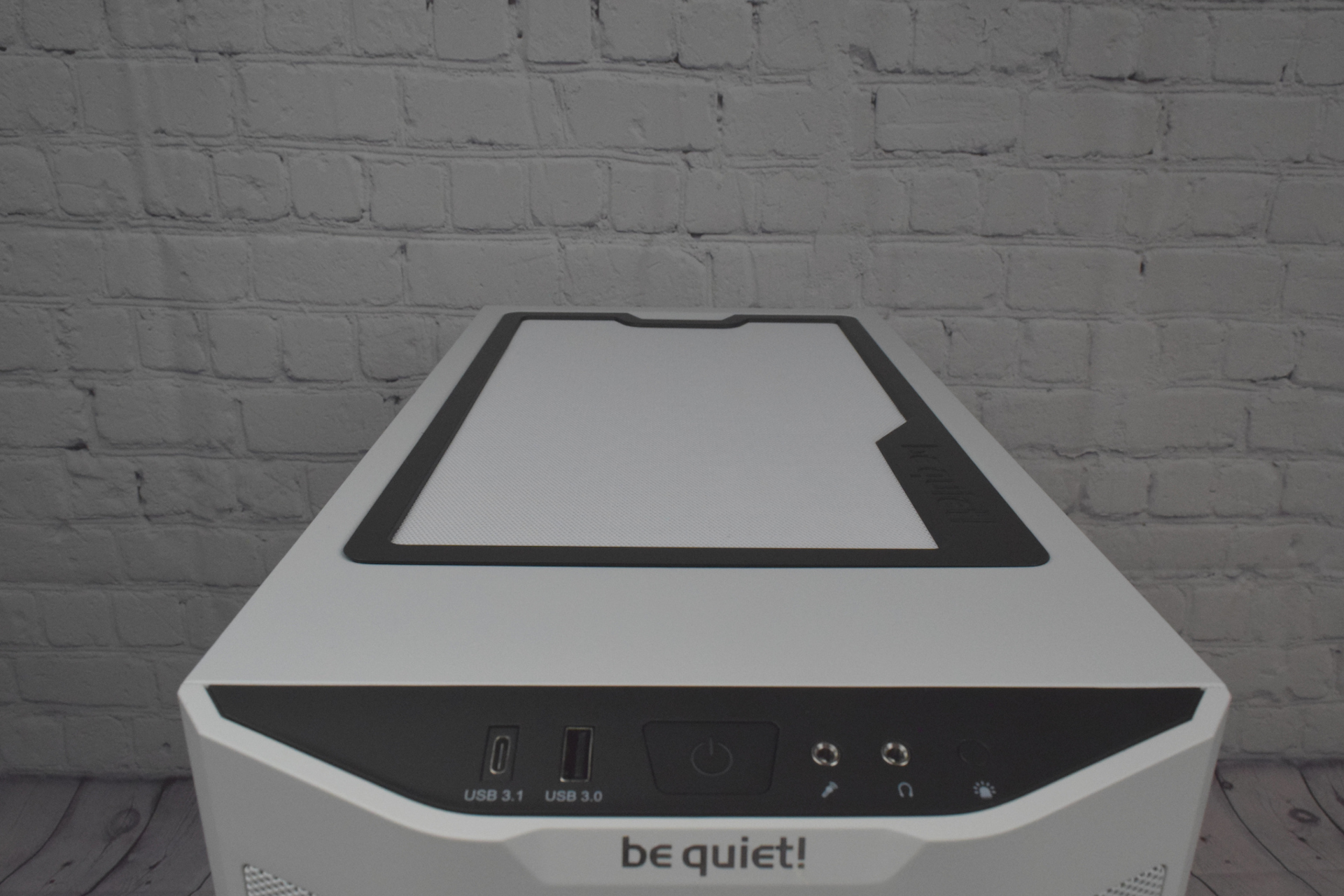 The front panel also has two RGB LED strips that run vertically down the case. These add some extra flair while not coming off as exceedingly flashy like some competing cases. The default lighting pattern has the lights steadily move downward in a repeating fashion. I can’t help but think about the warp engines from Star Trek when I look at these lights, especially after setting them to blue. 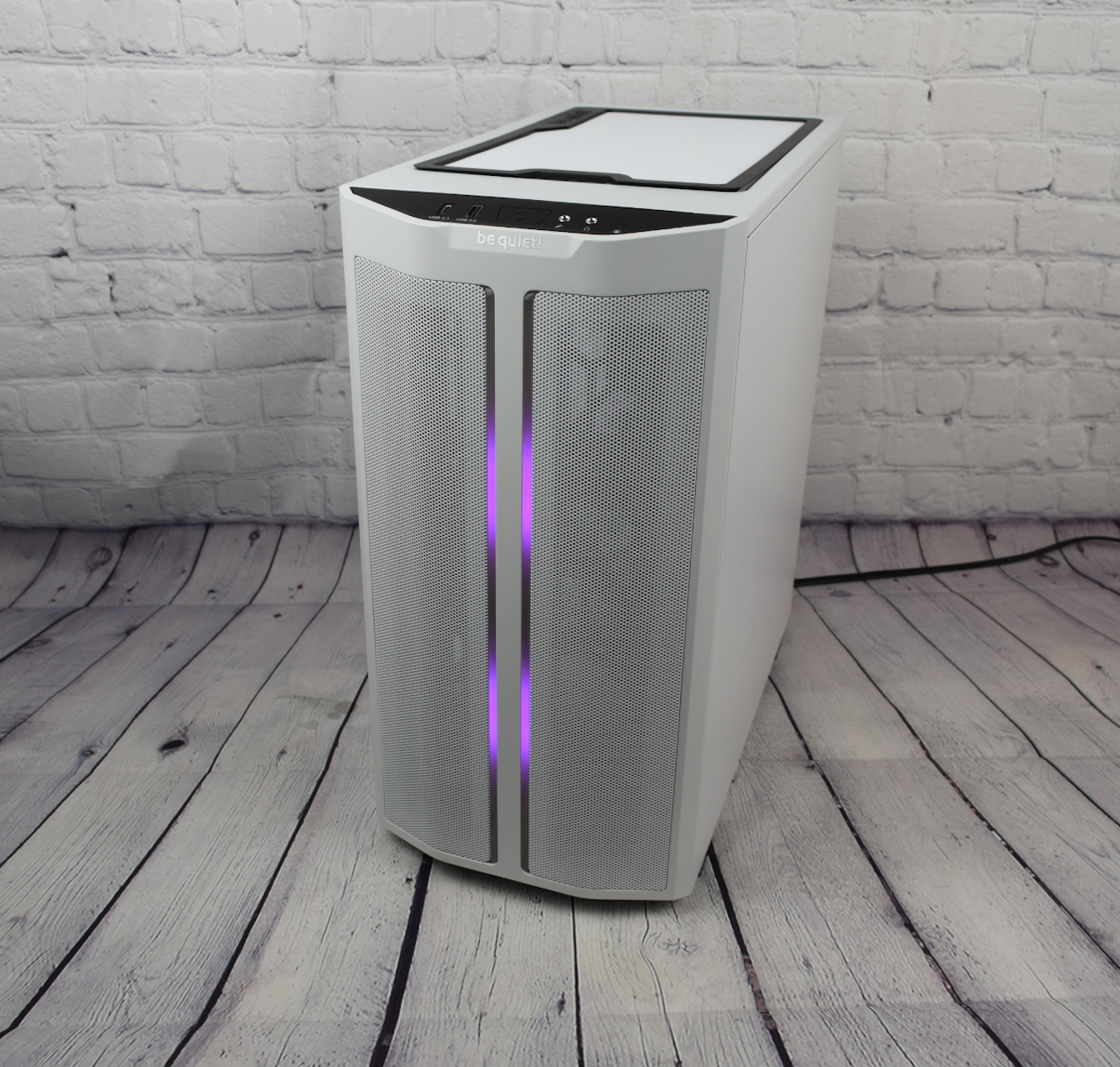 The right-side panel doesn’t have any holes for ventilation, but the inside of the panel is padded. This pad is designed to help reduce noise created by vibration, but it’s difficult to say exactly how helpful this is. The finished system doesn’t seem to be particularly loud, but this has a lot more to do with the cooling hardware you bring to the build than the case itself. 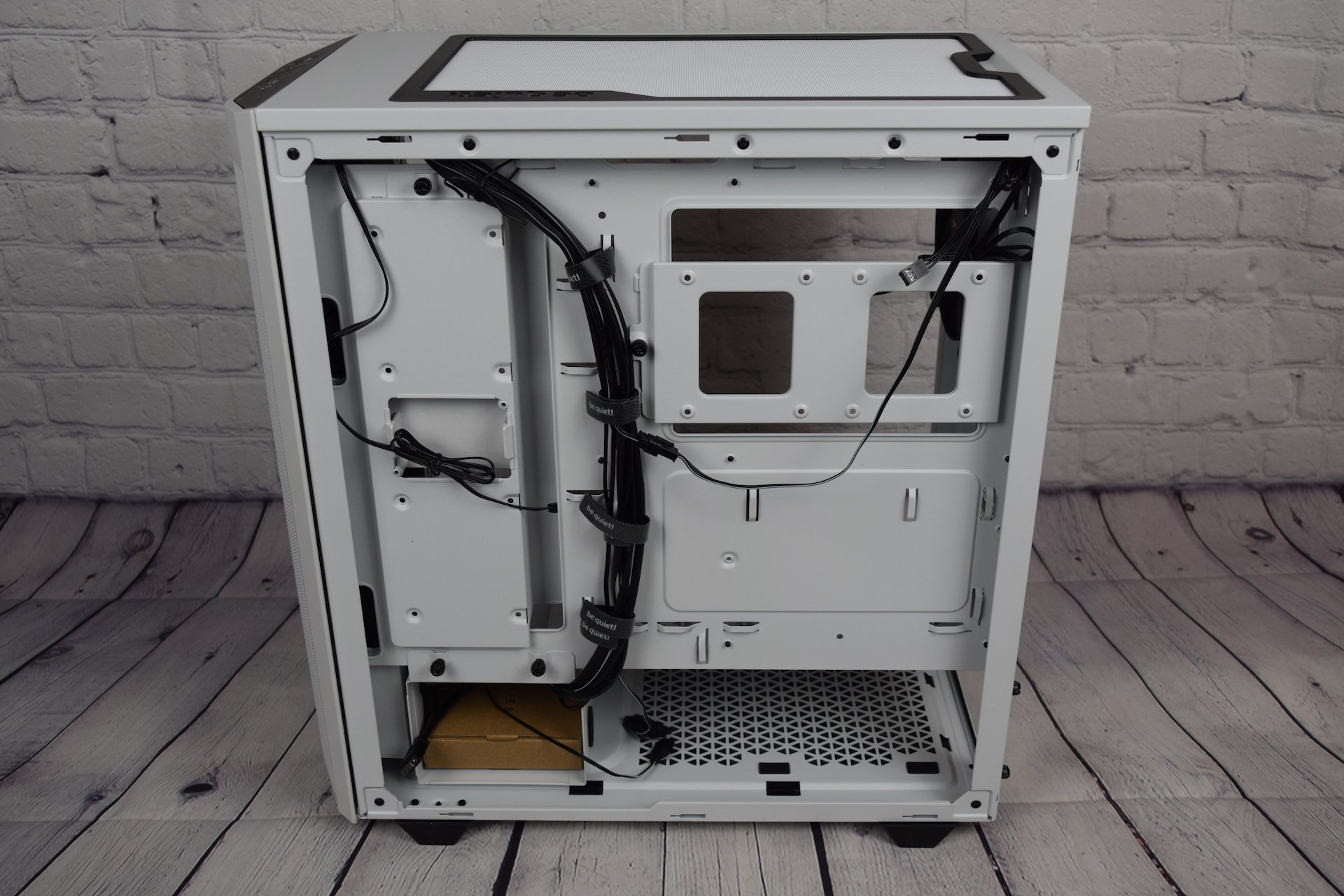 On the left side of the case Be Quiet installed a tempered glass panel that is held on by four screws, one in each corner. This gives you a good view of your components inside the case. This mounting method for the glass panel also makes it easy to remove. Most PC cases have panels that slide off toward the rear, as the Pure Base’s metal right-side panel does. This method has worked for decades now, but panels using this mounting method also have a tendency to stick in place. By contrast, after removing the four screws, the glass panel lifts straight off with ease. 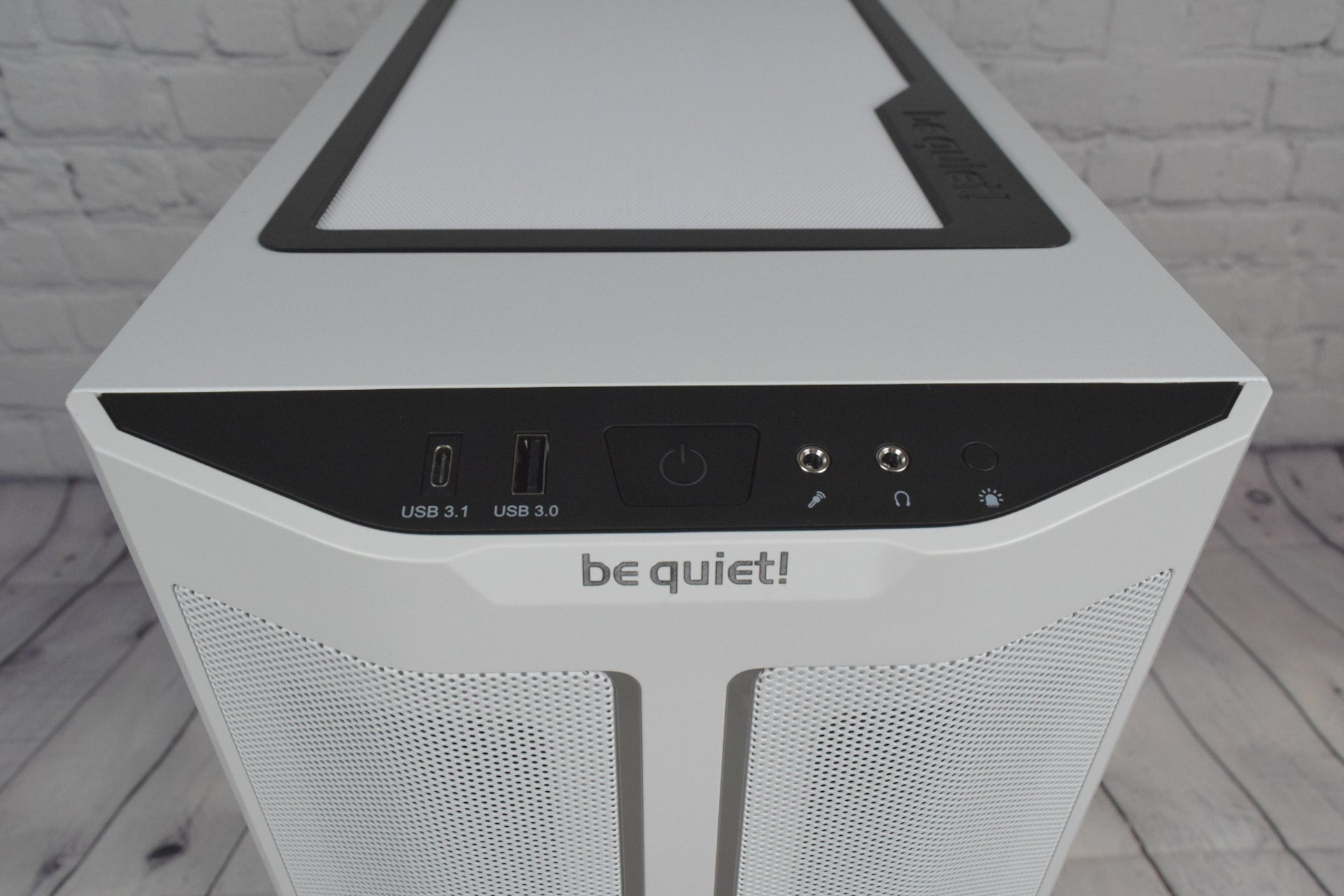 The “front” I/O panel on this case sits more on the top of the case, though it’s angled down slightly. There’s not much here. Case manufacturers always include microphone and headphone jacks, but I’d actually prefer to see those ports omitted if it meant we could get a few more USB ports, if I had to trade. As is, you get only two USB ports here, one a USB 3.0 Type-A and the other a USB 3.1 Type-C. You also get a nice big power button and a button to control the system’s aRGB LED lights. 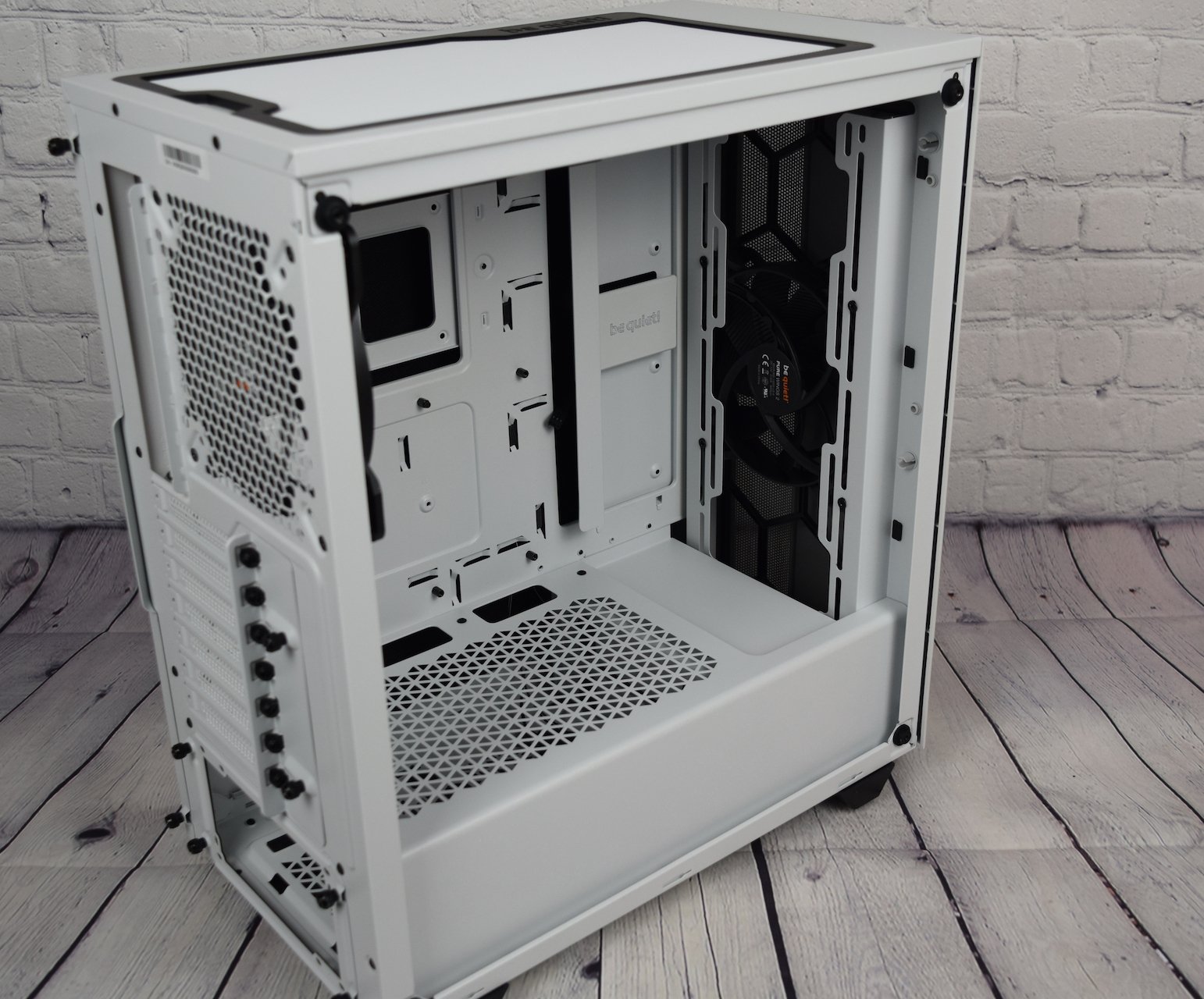 The Pure Base 500DX comes standard with three of the company’s Pure Wings 2 140mm fans, with one each on the top, front, and rear of the case. There’s room to add a few more fans if you like, with up to three 120mm fans in the front and two 120mm fans on top. I wasn’t able to find this exact model of fan available for sale separately, but other 140mm fans in the Pure Wings 2 series sell for between $12 and $18 each, and they are rated to generate a negligible 18.8dBA of noise.

This chassis can also take up to a 360mm radiator for CPU liquid cooling, but if you’re serious about cooling on that scale, you might be paying for good case fans you won’t use. Ditching the Pure Wings 2 fans would be something of a waste, relative to the case purchase.

The Pure Base Building Experience

Inside the Pure Base 500DX, the PSU and 3.5-inch-drive storage mounts are located in a compartment at the bottom of the case. In addition to making the finished system look cleaner, this design also makes building the computer easier in many ways. 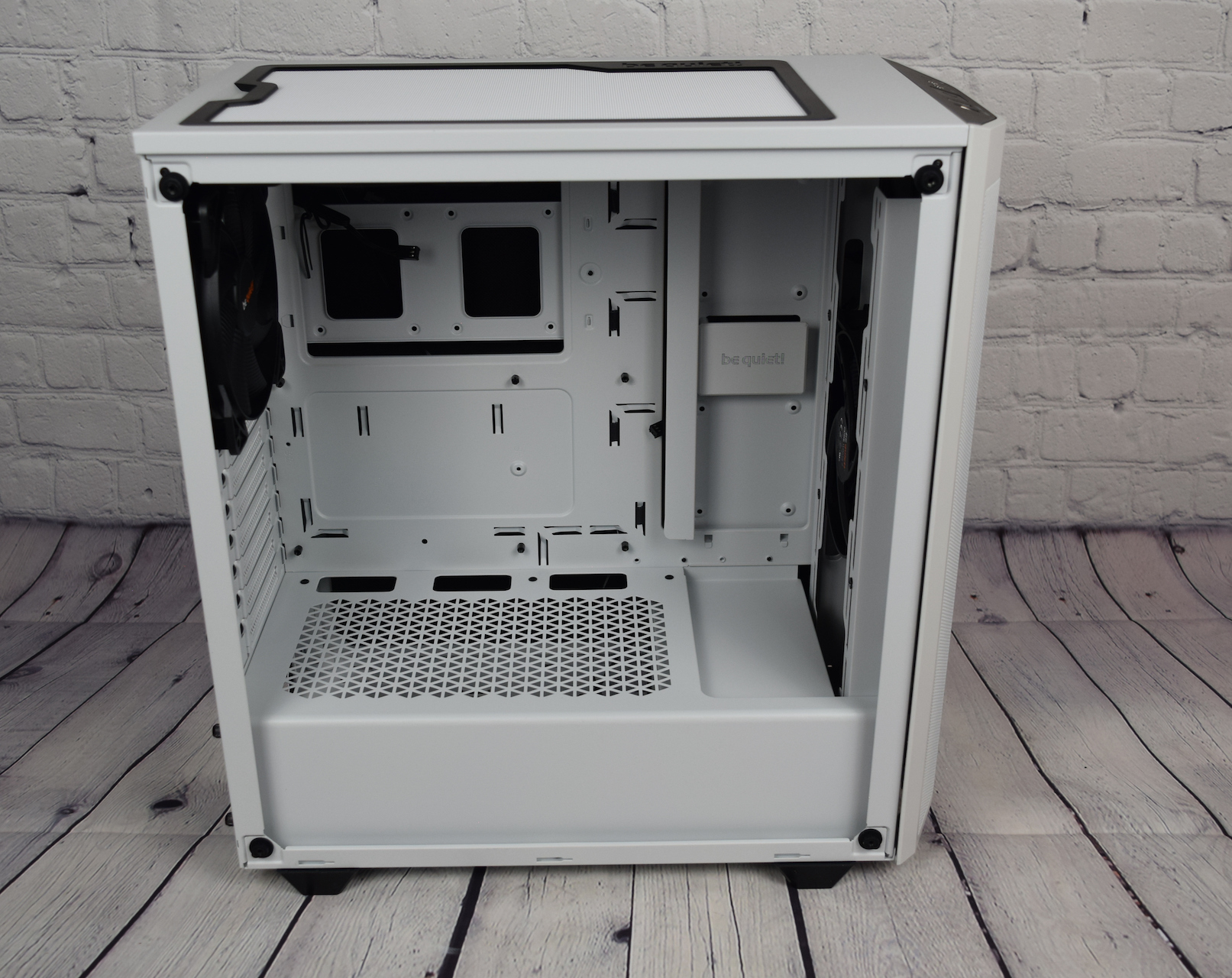 The main area inside of the case is left free of obstructions, which makes getting the motherboard into place easier, and it leaves room to install exceedingly large graphics cards (up to 369mm in length). As mentioned, the motherboard area is for ATX-size boards, though of course the case can accept smaller MicroATX or Mini-ITX ones.

Be Quiet also implemented a somewhat uncommon design for mounting the power supply. Instead of angling in and inserting the PSU from one of the side panels, you insert it through the back of the case. To do this, you first have to remove a bracket from the case, and then bolt it onto the PSU. Overall, this requires you to deal with more screws, but in my experience this is one of the easier PSU-mounting systems. It’s easier to feed through cables first and route them, before pushing in the PSU all the way. 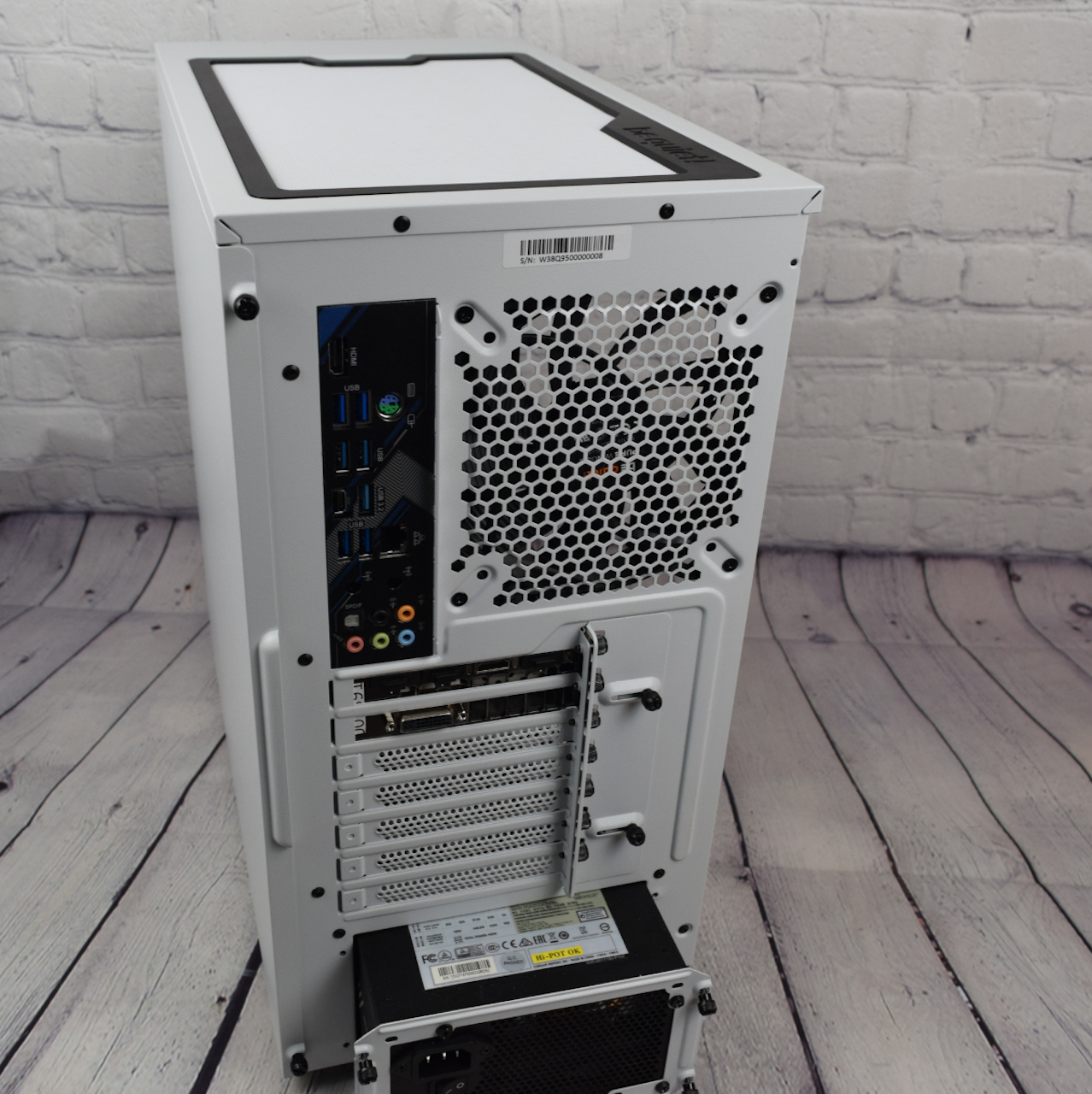 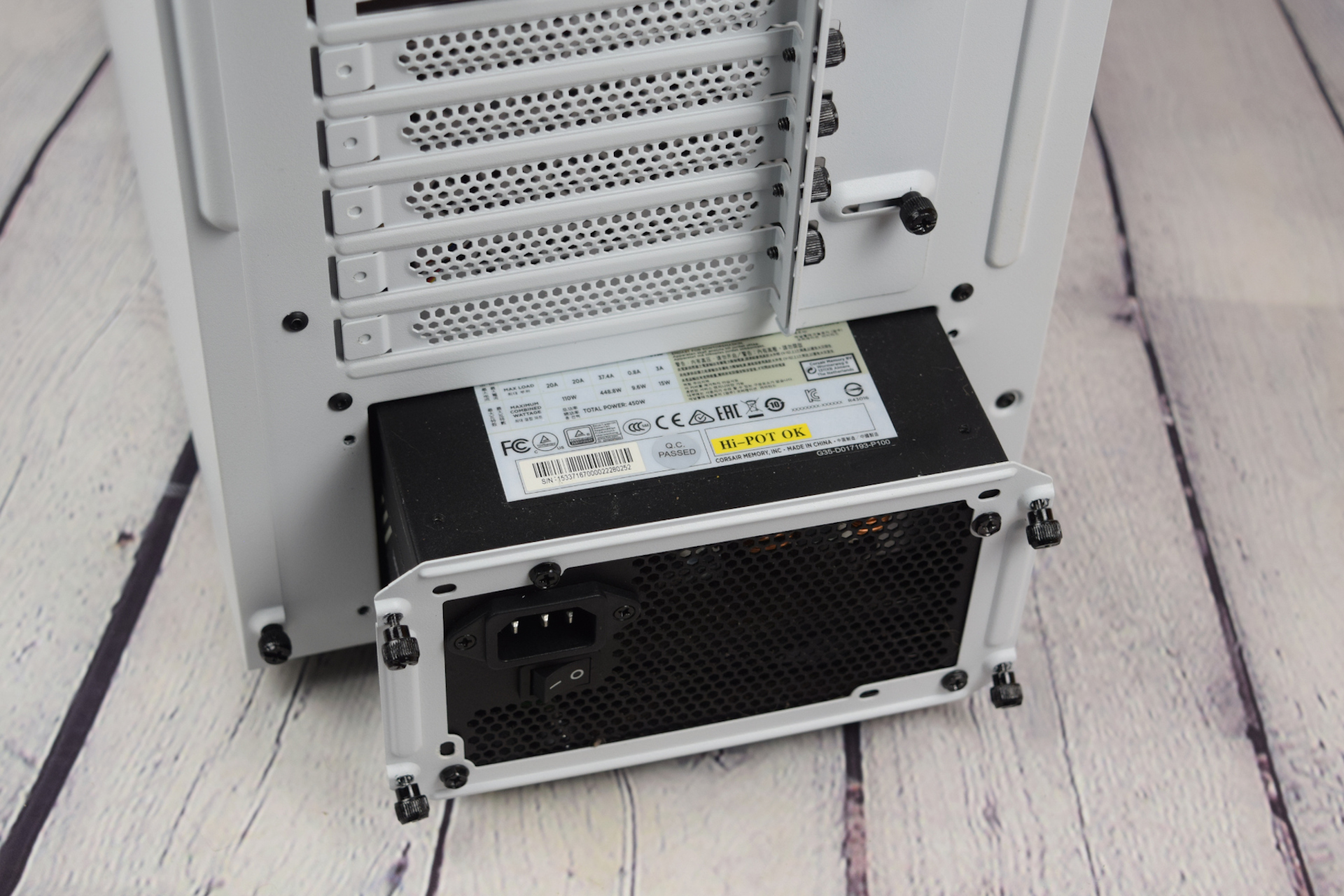 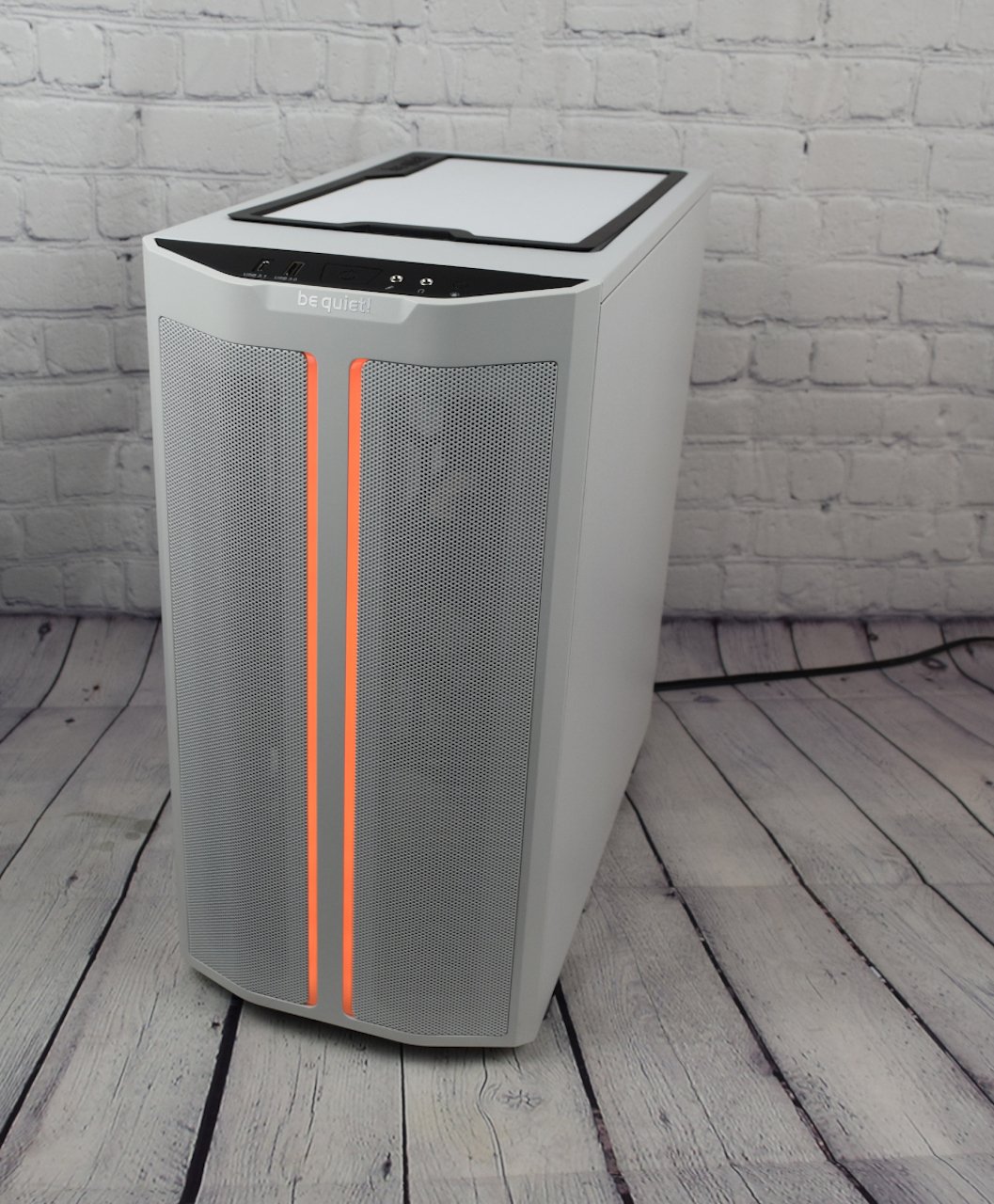 All of the storage mounts in this case require you to screw the drives into place. It would have been more convenient to have a toolless mounting system, but I don’t see that as often as I used to on cases these days. Fewer parts means less complexity to make, and presumably lower cost, and I suspect the kind of shopper building into a case like this isn’t swapping drives in and out all that often.

A (Pure) Base Instinct

At this writing, the Pure Base 500DX was available for just under $100 from Amazon and Newegg. This price feels reasonable for the feature set, but it also throws the case into a highly competitive market segment. Be Quiet’s own non-DX Pure Base 500 is a strong alternative to the 500DX, as it sells for $20 less, and there are dozens of others to consider within this price range, too. 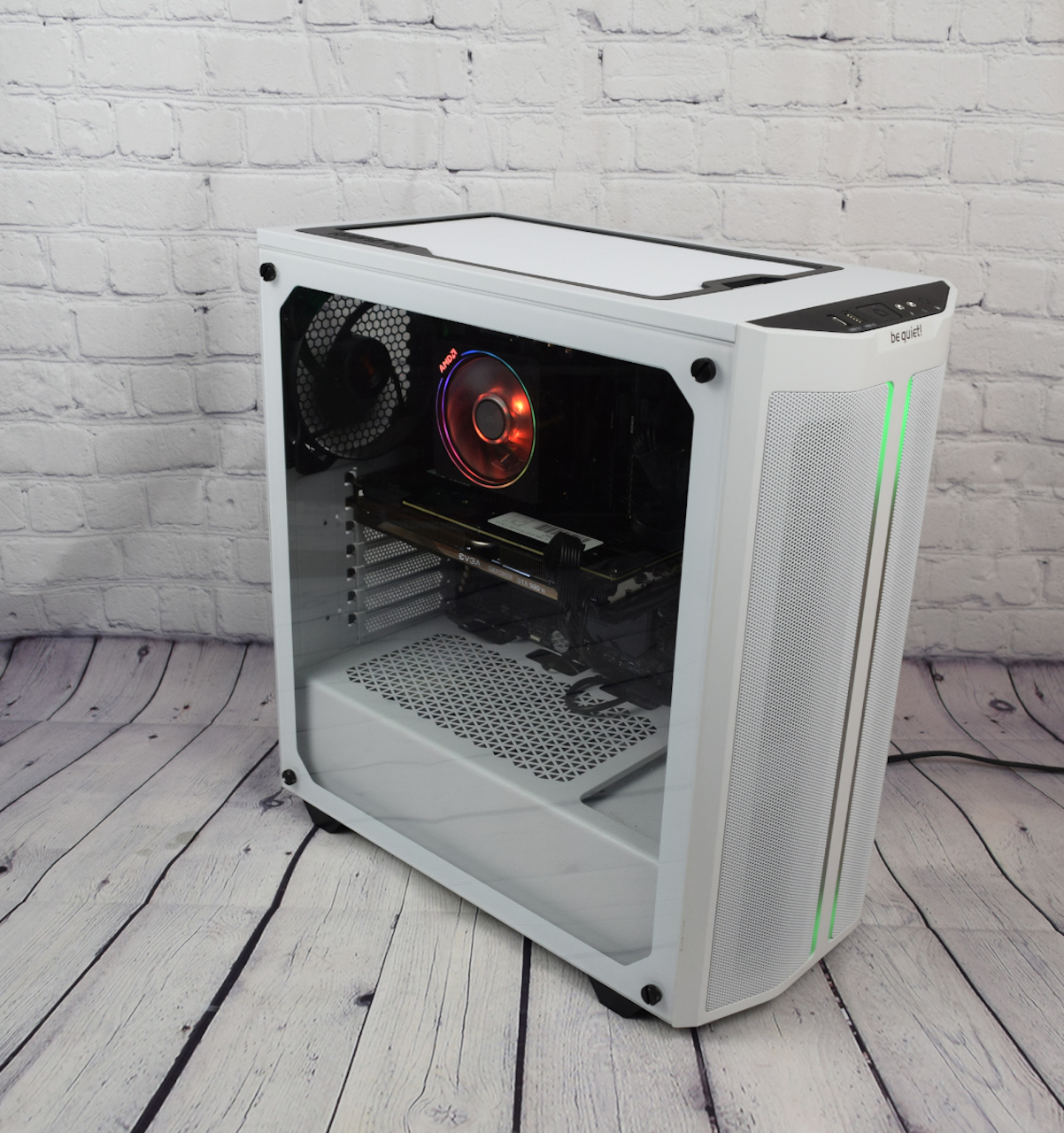 The 500DX is also not without limitations. I don’t have any complaints about the overall build experience; that went smoothly enough despite twirling a few more screws than usual. But having just two USB ports on the front of the case, only one of which is Type-A, is a problem in my eyes.

There aren’t any other notable problems with the case, though. It is reasonably priced, is easy to work in, and looks spiffy enough. Overall, I’d consider the Pure Base 500DX a worthwhile ATX option to build your system in if you’re looking for heavy air cooling right out of the box, and would benefit from the inclusion of three good fans. They are a big part of the value proposition.

Be Quiet Pure Base 500DX Specs