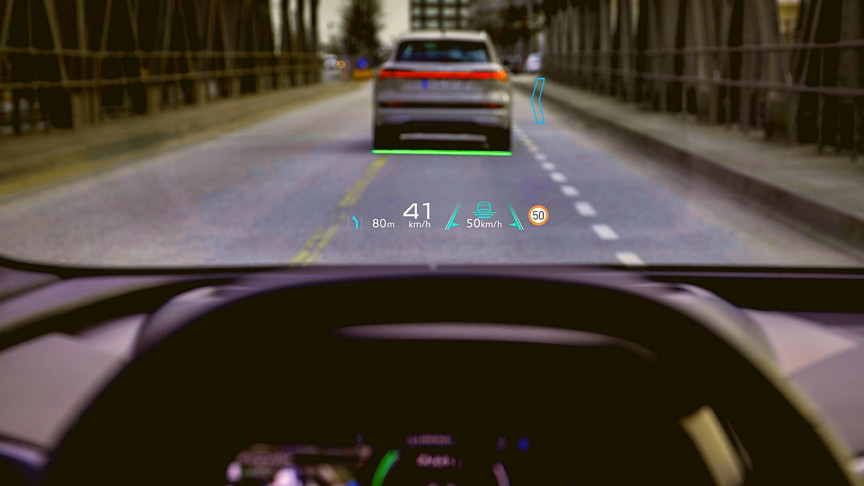 Audi debuted the interior design of its forthcoming all-electric vehicle — called the Q4 E-Tron — which is a modern take on the SUV and integrates a cutting-edge augmented reality display to enhance drivers’ situational awareness, according to a new blog post shared on Audi’s official website.

Augmented reality interface must appear to ‘adhere’ to real-world objects

Central to Audi’s Tuesday debut is the novel augmented reality heads-up display directly in front of the driver, which provides a wider field of view, and more accurate animations. The new AR system “inserts” a red line over lane markers to show drivers when they’re drifting too far to one side.

It also provides an animation that tracks the car ahead via adaptive cruise control, and offers navigation for every turn, displaying a bright blue arrow in the driver’s field-of-view.

The new AR system assembles more than 1,000 “signals” from sensors strewn about the Q4 E-Tron, to triangulate where each AR element should go — in addition to keeping them in place upon driving on unfriendly, bumpy surfaces.

Crucial to an AR interface capable of expanding a driver’s field-of-view with dynamic graphics is the need to make digital elements appear to adhere to real-world objects. No one wants to careen out of their lane from bad data, or follow a simulated goal into a concrete embankment.

However, it remains to be seen how well Audi accomplished this task. The company only revealed a handful of simulated animations of the AR display. But once the Q4 E-Tron is fully revealed in April and people eventually start driving it, we’ll know what it’s really like.

The Q4 E-Tron also comes with an optional touchscreen — the biggest one Audi has ever installed in a vehicle — which is 11.6 inches (29.5 cm) diagonally. Without the optional upgrade, the new all-electric SUV’s touchscreen is roughly 10.1 inches (25.6 cm) — with a 10.25-inch (26-cm) driver display nestled behind the steering wheel.

The steering wheel itself was also reimagined — switching physical buttons with backlit touch-sensitive buttons. To simulate the feeling of pressing a button, the touch-sensitive ones provide haptic feedback, and some of them can swipe or scroll down lists displayed behind the wheel.

Q4 E-Tron is ‘a pinch’ smaller than Tesla Model Y

We also got a sneak peek of the Q4 E-Tron’s noteworthy exterior, which will see a complete debut in April — along with some foundational specs on the forthcoming SUV.

We have yet to hear a range estimate from the German luxury automaker since the Q4 E-Tron concept initially debuted in 2019. But the more compact size combined with VW’s MEB platform will probably make the SUV lighter than the original concept — which weighed in as comparable to Tesla’s Model X.

In the past, Audi has promised the Q4 E-Tron could go 280 miles (450.6 km) with a single, full charge. But this estimate could change after years of work.

Additionally, Audi claims its Q4 E-Tron has a wheelbase similar to medium-sized SUVs — without sacrificing the interior space of a full-size SUV. The company did this by placing much of the internal technology into the MEB platform — which comprises the SUV’s floor.

All to say that Audi’s new SUV might achieve a measure of success when it goes to market. Audi sold roughly 47,000 all-electric vehicles in 2020 — including the E-Tron Sportback and E-Tron SUV, but this only made up nearly 3% of its total sales. This means once the Q4 E-Tron hits the road, it could bring more of Audi’s sales — and by ownership VW’s — under the umbrella of next-gen all-electric vehicles. Tesla may be among the most popular all-electric vehicle companies, but it may face some serious competition in the coming decade.