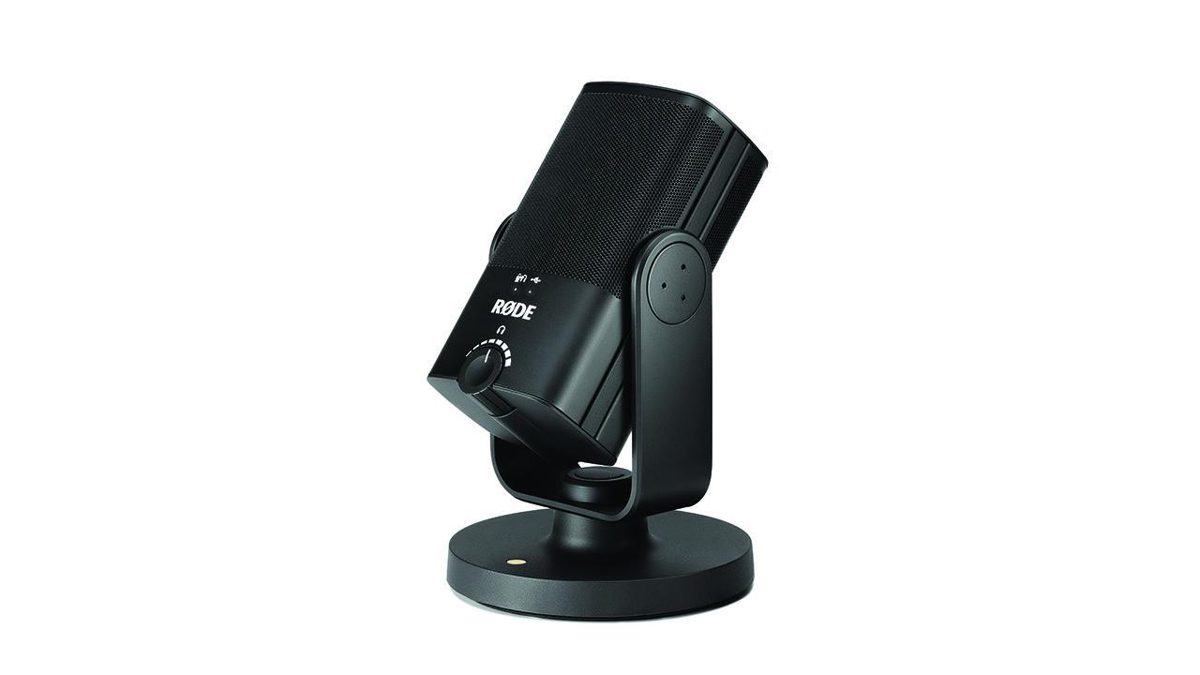 Rode delivers a no-nonsense USB mic with the NT-USB Mini, a compact, easy-to-operate $99 desktop model. Its fixed cardioid pattern is useful for recording vocals or instruments, and is also suitable for gaming, podcasting, and business calls. Some will find the lack of adjustable mic patterns and EQ/DSP modes to be limiting, but most professional mics lack these parameters as well. This means the NT-USB Mini will most likely appeal to those who are somewhat familiar with basic recording techniques and don’t need too much help from DSP presets—there is no DSP on the audio signal itself, so those looking for a more pure mic signal will find the NT-USB Mini an appealing option.

Measuring 5.6 by 2.1 by 1.8 inches (HWD), with a circular base that has a diameter of 3.5 inches, the black NT-USB Mini is a relatively compact USB microphone. On its front panel, there’s a headphone volume knob, as well as two LEDs that tell you when the mic is powered via USB or when you’re in zero-latency monitoring mode—pressing the volume knob turns zero-latency mode on or off.

The back panel houses the connections for the included USB-C-to-USB cable, as well as the 3.5mm headphone jack. The internal headphone amp is suitable for high-impedance headphones, and should work just fine with any typical studio monitor-style headphones. The top portion of both front and back panels is covered in metallic grille, behind which is a built-in pop filter and a condenser capsule with a fixed cardioid pattern, delivering a frequency range of 20Hz to 20kHz.

The 1.2-pound (with stand) mic can swivel to meet almost any recording angle, and rests upon its desktop stand thanks to a clever magnetic design that allows the mic to simply snap into place. You can also pop the rubber joint out of the mic’s base connector if you wish to screw the NT-USB Mini into a traditional threaded mic stand.

The NT-USB Mini delivers a depth of 24 bits and a 48kHz sample rate. It’s compatible with macOS 10.12 and Windows 10. We had no issues with GarageBand recognizing it immediately on a Mac Pro running Catalina.

Rode includes an adapter for smaller threaded mic stand connections, and a velcro cable management tie. What’s missing? Other than the DSP modes or multiple mic patterns, that you would use for specific scenarios,  you might wish there was a dedicated gain knob. Instead, you’ll be using your recording program’s gain controls.

Internally, a pop filter helps guard against plosives, though we found closely recorded vocals were still quite capable of overwhelming the pop filter. Thus, if you plan to record close to the mic, we recommend using a traditional mic stand, which will allow you to add in your own external pop filter—the desktop stand doesn’t really have a design that allows for attaching an external pop filter easily.

Rode recommends using the mic from a distance of roughly four to six inches for vocals, and our recordings at this range were crisp, clear, ideal for podcasting or musical vocals.

The cardioid pattern does a good job of zeroing in on the recording subject and dialing back room audio originating from the opposite direction. We found the vocal recordings we made to be crisp and clear, and free of the sometimes overdone DSP we hear with affordable USB mics. The only DSP in play here is to ensure a zero-latency monitoring experience and help with operations like USB playback, but the audio signal itself is not EQed or dynamically compressed. Thus, what you end up with is a largely uncolored signal.

Compared with, say, the $99 Shure MV5, the NT-USB Mini sounds a bit brighter, with perhaps a little less low-frequency/low-mid presence. It’s a clean, crisp signal, but it cannot be altered within the mic, whereas the Shure MV5 has multiple modes that end up sounding noticeably different, both in terms of EQ and compression. The advantage a mic like the MV5 has over the NT-USB Mini is the ability to completely disable DSP, but bring it in when necessary.

The NT-USB Mini is a crisp, clear USB mic microphone. Some of the frills it lacks—DSP, for instance—may appeal to those seeking a pure signal path, while others—like the lack of a gain knob—are a bit less easy to get excited about. In this general price range, we’re also fans of the $99 Blue Yeti Nano, which also uses no DSP; the aforementioned Shure MV5, which features adjustable DSP modes; and the far less expensive, DSP-free Blue Snowball Ice. The NT-USB Mini is another solid option in this price range that sounds particularly strong when the levels are right.