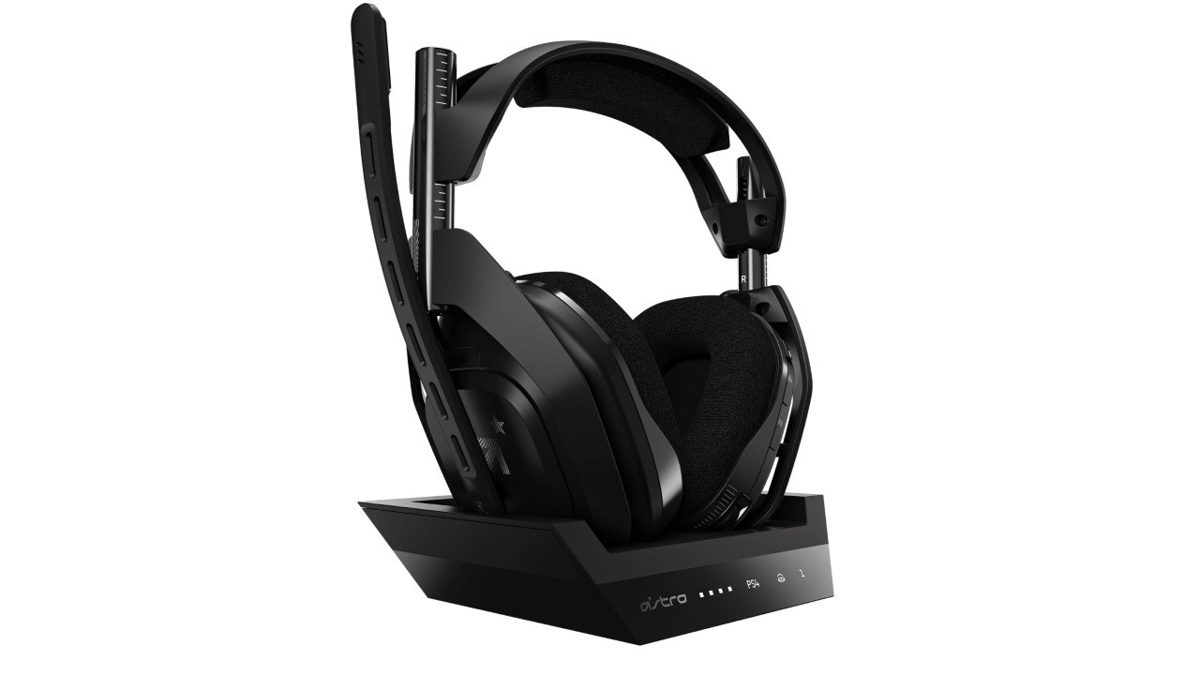 Astro Gaming’s A50 has long stood as one of our favorite wireless gaming headsets. The 2016 version was an Editors’ Choice in its category, and the updated 2019 version improves on the design and adds a few useful features. It remains an excellent wireless headset that can work with your PC and choice of PlayStation 4 or Xbox One, but other manufacturers have really stepped up their game in the last few years, pitting the $299.99 A50 against some pretty stiff competition, like the Editors’ Choice SteelSeries Arctis Pro Wireless.

Physically, the latest A50 headset is nearly identical to the 2016 model. It’s a solidly built pair of headphones with prominent pipe-shaped vertical aluminum supports that connect the large, rounded rectangular earcups to the headband. The design is much more understated than the previous version, foregoing primary colors for anodized aluminum and settling on an almost entirely black color scheme, with gray accents on the PC/PlayStation 4 version and gold accents on the PC/Xbox One version.

The boom microphone is permanently attached to the back of the left earcup, and can flip up out of the way to automatically mute. All physical controls sit on the right earcup, and include a volume wheel, an equalizer preset button, a Dolby surround sound button, and a power switch on the rear edge, as well as a game/voice mix rocker switch across the back panel. A micro USB port on the bottom of the right earcup lets you charge the headset through a wired connection if you don’t want to use the base station.

Each earpad features a generous amount of memory foam covered with breathable fabric, matched by padding on the underside of the headband. While the supports on the sides of the headset are aluminum, the rest of the headset is durable matte black plastic. The result is a light, comfortable fit you can wear for long play sessions.

The base station is the biggest change between the latest A50 and the 2016 version. It’s about two-thirds the size of the previous base station, and can be mistaken for a charging cradle. It’s an inverted black plastic trapezoid measuring 4.8 inches wide and 3.3 inches deep, with large recesses equipped with charging contacts to hold the headset vertically. The indicator lights on the front of the base station are now located directly below the charging recesses, instead of to the right like they were on the wider 2016 model. The lights show the headset’s current charge, whether it’s set to PC or console mode, whether Dolby simulated surround sound is enabled, and which of three equalizer presets are currently on.

Depending on which version of the A50 you get, you can use the headset with the PlayStation 4 or Xbox One. You can also use either version with your PC. For PC, just plug the base station into a USB port with the included micro USB cable (only one comes with the headset, so you’ll have to get your own if you want to play while charging). For either console, plug the base station in with the micro USB cable to enable the microphone and power the headset, then connect the optical audio output of your console to the input on the station with the included optical audio cable to enable sound through the headphones.

If you use the A50 with a PC, you can customize how it acts and sounds with the Astro Command Center app. The software lets you set three EQ profiles accessible through the button on the headset, using a selection of presets or with a custom profile with a five-band EQ. You can also adjust the microphone’s noise gate mode and sidetone level, though the customization options here aren’t anywhere close to the mic-tweaking you can do with the Logitech G Pro X or Sennheiser GSP 670. You can also adjust the balance between game audio, chat audio, mic input, and any source plugged into the aux input for the Stream Port, the line input device that shows up as an alternative to the microphone input (helpful if you want to adjust volume levels and balance while streaming or recording).

The A50’s microphone is very solid, with a small amount of tinkering. The noise gate presets seemed rather aggressive at first, but after some experimentation in Astro Command Center, I found that the default mic gain levels were simply a bit low. Once I pushed the gain slightly above the recommended setting, my test recordings cut through the slightly muffled sound I experienced in my first tests and produced clear, fairly clean sound.

As mics go, however, the A50 doesn’t shine quite as much as the Sennheiser GSP 670, or the wired Turtle Beach Elite Pro 2.

The headset is more than capable at handling music, producing appreciable but not overpowering bass. In our bass test track, The Knife’s “Silent Shout,” the bass synth notes and kick drum hits come through with palpable force, and don’t distort even at maximum volume.

The opening guitar plucks in Yes’ “Roundabout” get plenty of resonance in the lower frequencies and a good amount of string texture in the higher frequencies. When the electric bass kicks in, it sounds punchy without overpowering the mix, letting even the delicate strumming in the left channel come through clearly. The drums and vocals also get enough presence in the mix, providing a balanced sound that serves all elements of the track.

The Crystal Method’s “Born Too Slow” sounds powerful and energetic on the A50, giving plenty of response across the frequency spectrum. The backbeat is punchy and packs weight, while the screeching vocals, guitar riffs, and snares get lots of high-mid response to drive the track.

I played some Apex Legends with the A50. The sounds of combat were punchy and detailed, with gunfire getting plenty of power. Footsteps and other sounds came through clearly, letting me know when there were nearby soldiers. The Dolby simulated surround sound gives the game a nice, wide sound field with strong stereo panning, but it doesn’t provide much more than vague directionality when trying to track down the source of noises. It’s strong performance that lets all sound come through clearly and with lots of presence.

I also played some Call of Duty: War Zone with the A50. The various weapons sounded distinct and powerful, letting me pick out different types of gunfire in the distance. The Dolby simulated surround provided some solid directionality, giving me a sense of when the action was far off or just around the corner. Besides the gunfire, footsteps and character dialogue were easily heard over the action.

The Astro Gaming A50 continues to be an excellent wireless gaming headset. It feels good, sounds good, and has a very convenient charging base that’s been shrunk down from the last version. The Astro Command Center enables some useful tweaks to sound and microphone performance, which further improve the experience of using the headset. That said, it feels like a small step forward over the 2016 model, while several other gaming headsets have since established themselves as equally capable, and occasionally offering even better sound.

For a bit more than the already pricey A50, the $330 SteelSeries Arctis Pro Wireless offers excellent performance, plus Bluetooth connectivity and a pair of hot-swappable batteries, while the $350 Sennheiser GSP 670 has fantastic sound and an equally fantastic mic, and also offers Bluetooth connectivity. On the more affordable end, the Turtle Beach Elite Atlas Aero and Razer Nari Essential sound excellent for less than half the price of the A50. None of these headsets have convenient charging bases, but they all have their own appealing aspects, and are worth your consideration, showing how far this category has grown since the original A50 came out.