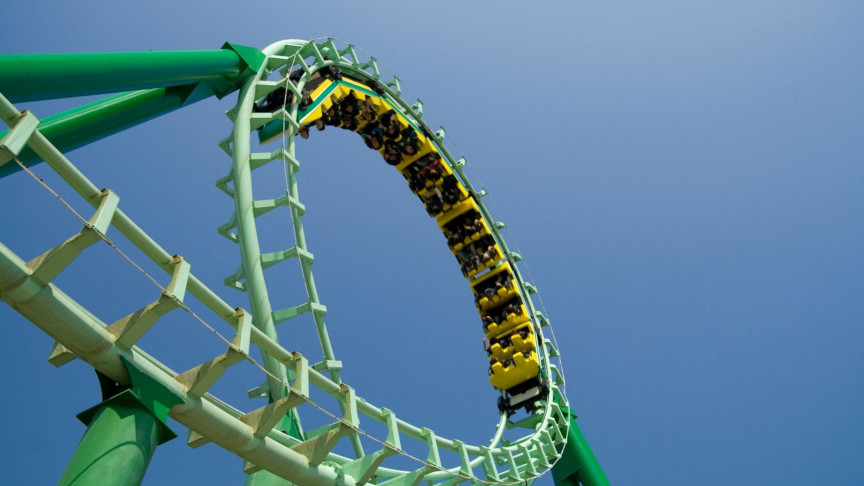 Your hair is flying wildly above your head, your knuckles have turned white from gripping the handlebar so tightly, and you’re screeching at the top of your lungs in sheer terror, yet you’re having the time of your life. Where are you? A roller coaster.

Roller coasters have drawn keen crowds since the Russians started building early versions in the 15th or 16th century. These “flying mountains” were giant, wooden slides — up to 70 feet (21 m) tall and 100 feet (30 m) in length — covered in slick ice. Riders were mounted on an ice block with a straw seat and a piece of rope for restraint. The tracks were continuously wet with water to make the ice blocks slide and a heap of sand was placed at the bottom to slow riders down.

Riders could reach impressive speeds of up to 50 mph (80.5 km/h). Over time, the rides became more ornate and were even used by Russia’s tsars. Later on, a summer version was developed, where riders sat in boxes with wheels that fit into grooved wooden rails — an early version of the modern roller coaster.

In contrast, today’s fastest roller coaster, the Formula Rossa, doesn’t need any water to reach speeds of 149 mph (240 km/h) in under five seconds. Aptly belonging to the Ferrari World theme park in Abu Dhabi, this ride isn’t one for the fainthearted.

To create the sensational rides we know today, designers have exchanged wooden frameworks and ice blocks for metal and steel girders, and added a whole lot of engineering.

How do roller coasters work?

Roller coasters are not propelled by engines, but they do need to gather energy in order to work. To get a roller coaster ready to go it needs to first build up energy. So, an electric winch winds the cars to the top of the first hill.

The winch uses energy to pull the roller coaster cars upwards, which it then stores. The higher the cars go up the hill, the more  energy they store. You know that slow chug up the first hill of a ride, when you feel a kaleidoscope of butterflies fluttering around your stomach? That’s when the roller coaster is building up its energy to take you on the ride of your life.

This type of energy is called potential energy, as it has the ability — or potential — to be stored for future use. Then, as the ride’s cars accelerate, their potential energy turns into kinetic energy — energy the cars possess by virtue of their being in motion.

A waltz of potential and kinetic energy

Of course, eventually, much of the kinetic energy is reduced by the effects of friction and air resistance and so the rollercoaster ride must eventually come to an end. The cars simply run out of energy.

Thanks to this use of potential and kinetic energy, and to the creative minds of roller coaster designers, some of today’s rides will rock your socks off.

Some of the most impressive rides today

The ride gained its title as the steepest in the world thanks to its 121-degree drop angle. Each and every one of the eight riders on this single-vehicle coaster will feel as though they’re falling out of their seat during that drop. And if that wasn’t enough, it accelerates to 62 mph (100 km/h) in just two seconds.

A list of the world’s most renowned rides would be incomplete without the earth shattering Kingda Ka. Based at the Six Flags Great Adventure park in New Jersey, this monster of a ride reaches heights twice as high as the Statue of Liberty (if you don’t include her base), going up 456 feet (139 meters) before torturously dropping down.

It has rightly gained the titles of the tallest roller coaster in the world, and North America’s fastest, according to Six Flags. Straight off the bat, it speeds from 0 to 128 mph (0 to 205 km/h) in 3.5 seconds, then shoots up 90 degrees, before swooping down in a 270-degree spiral that’ll make your insides tangle, and just when you think you’ve reached your limit, it bumps you along a 129-foot (39-meter) camel hump.

Endorphins are guaranteed to be pumping through your body after this hair-raising ride. Luckily, rides like these go through rigorous testing and are generally very safe to go on, but that wasn’t always the case.

Past roller coasters that weren’t safe and why

“It changed my life forever,” Rodney Chayko told CBC. Chayko is a survivor of the Mindbender 1986 roller coaster malfunction that happened in Alberta, Canada.

The scene sounds like it belongs in a horror movie: One of the cars on the famous triple loop, indoor roller coaster went flying off the rails because of a fault which disengaged the safety bars. Riders were sent flying out, hitting concrete walls. Tragically, three people in the car died, and Chayko was the only survivor.

The ride shut down for over a year, going through rigorous safety modifications before going back into business at the West Edmonton Mall’s Galaxyland. The Mindbender ride has operated safely since that day, and is now called the, “world’s largest indoor triple-loop roller coaster,” zooming riders to speeds of up to 60 mph (97 km/h).

Another fatal roller coaster accident happened at Japan’s Expoland outside of Osaka in 2007. The six-car Fujin Raijin II accident killed one person and injured 18 others when a car derailed. It turned out that one of the ride’s cars had a fault in a wheel axle that had not been replaced in 15 years. This axle broke right before the coaster turned into a circular section of the course, causing the car to crash into the guardrail.

Approximately 28 percent of people listed in the study died due to direct injuries from the ride. Essentially, people are more likely to die of heart attacks during or after a roller coaster ride than because of a glitch in the system. And, as safety measures keep improving, this record is likely to improve.

Looking to the future

Roller coasters of the future are bound to be wild, and some of the most anticipated ones will open this year. These include…

The Harley Quinn Spinsanity opened at Six Flags America in Massachusetts in 2018, but a sister version debuted in the Six Flags America Maryland park this year, so we’ll count it here. Based on the DC super villain Harley Quinn, this gigantic spinning pendulum will raise the hair on your skin just as much as the film character does.

Able to hold and twirl 40 thrill-seekers at a time 15 stories up in the air, and soaring to speeds of up to 70 mph (112.6 km/h) all while hitting a 120-degree angle at the peak of the swing, this ride is sure to be a crowd-pleaser. Riders are literally hurled back and forth on this epic, scream-worthy ride. The ride opened in May, but on June 21, the ride began shaking and safety sensors stopped the ride mid-cycle. Everyone was evacuated safely and the part shut the ride to conduct tests.

Poland’s Abyssus in Energylandia is “coming soon,” and will feature a double launch and four inversions along its 4,317-foot (1,316-meter) course.

Standing 126 feet (38 meters) tall, the coaster will speed along at just over 62 mph (99.7 km/h) through a very twisted layout that will cross over and under itself a number of times along the way. It will also zoom past buildings, over water, and even through some narrow trenches.

Enjoy a sneek peak of Abyssus’ premier test (YouTube video embedded below) to get your adrenaline pumping and your skin tingling. It looks like it’ll be one for the daredevils.

Much to many an adrenaline junkie’s delight, we’re bound to keep seeing some epic, and safe, roller coaster rides come to life as technology keeps improving. Just think of how far rides have come since those Russian ice block rides — we’ll bet noone back then expected humans to be zooming and looping at insane angles and speeds in a matter of seconds.

We’re curious to find out what the roller coasters of the future will look like, but one thing’s guaranteed: There will always be a captivated, fun-seeking audience ready to get in line.