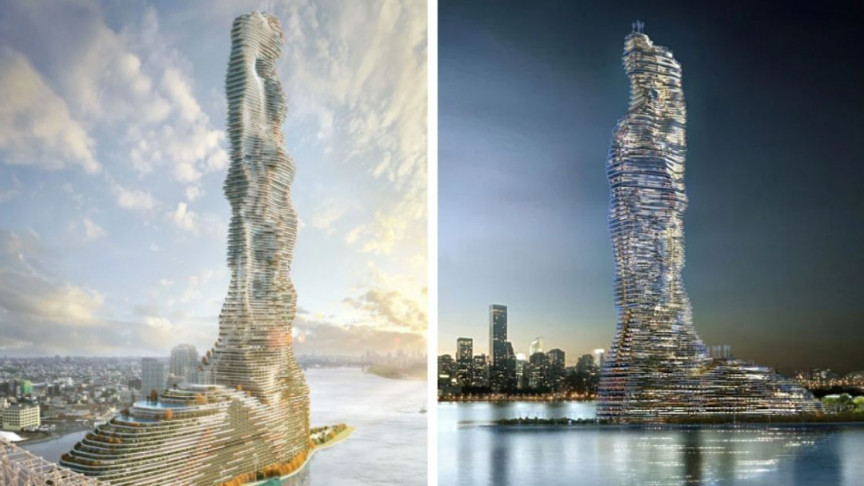 Many nations around the world are currently on a mission to reduce their carbon emissions within the next few decades. While one method is to rely more heavily on renewable forms of energy generation, some researchers are searching for ways to remove excess carbon dioxide from the atmosphere altogether.

That’s where strategies like carbon capture and storage could come in handy. However, most CSS solutions are pretty utilitarian and designed for industrial applications.

A French architectural firm has come up with an interesting concept for a “carbon eating” residential tower that might just be a vision of the future of city living.

RELATED: 15+ PROJECTS THAT COULD END AIR POLLUTION AROUND THE WORLD

What does carbon capture mean?

You’ve probably heard the term “carbon capture” before, but what exactly does it mean? More accurately called carbon capture and storage, CCS for short, is any use of technology that draws carbon dioxide from the air and storing it, for example, in underground geological formations. The aim is to prevent the release of large quantities of CO2 into the atmosphere.

It more usually refers to capturing carbon dioxide at the source from fossil fuel-powered sources. but can also be applied to other post-emission technological solutions like “artificial trees” and carbon scrubbing towers, etc. When referring to other methods of capturing carbon dioxide, not from the source, the process is more commonly known as carbon sequestration.

For the former, some such technologies are capable of removing up to 90% of carbon dioxide from combustion gases in electrical generation and other industrial processes, such as cement production.

Pre-combustion methods are those that occur prior to the fossil fuel actually being burned. This usually involves the conversion of the fuel into a mixture of hydrogen and carbon dioxide.

The latter, oxyfuel, involves the production of lower amounts of carbon dioxide through the use of almost pure oxygen during the combustion process. Post-combustion and oxyfuel technologies can be fitted to new plants or retrofitted to older ones.

Pre-combustion, on the other hand, requires large amounts of modifications to the existing plant in order to be installed. This makes it more viable for new builds.

These estimates are, of course, entirely dependent on the fuel involved, technology, and location of CCS solutions.

What is carbon sequestration?

As previously alluded to, carbon sequestration is, as defined by the USGS, “the process of capturing and storing atmospheric carbon dioxide. It is one method of reducing the amount of carbon dioxide in the atmosphere with the goal of reducing global climate change.”

It is normally used in reference to the long-term storage of carbon in plants, solids, geological formations, and the oceans. This process can occur both naturally and also via some human activities.

The concept has received much interest over the last few decades in an attempt to increase the rate of carbon withdrawal from the atmosphere, through changes in land use and forestry, but also through some geoengineering techniques too.

One of the most common ways to sequester carbon dioxide is through the planting of trees and other vegetation, especially in urban areas.

What are some examples of carbon-free projects and buildings?

There are various buildings and concepts for buildings that have the aim of reducing carbon in buildings at their heart, but one of the most interesting is Mandragore.

One of the latest in carbon-free projects, the idea comes from the French architecture firm Rescubika. The firm proposes an enormous “green” residential tower building cited in New York City’s Roosevelt Island. This ambitious building really pushes the envelope for sustainable design and also hopes to change the meaning of living in a dense urban environment.

The building is very bold in its design but it is also pretty easy on the eye. Mandragore was designed for the “City of Tomorrow Project,” which envisions a carbon-neutral New York City by 2050.

To help achieve this, and fit the remit form carbon-free buildings for the city, Rescubika settled on using a carbon sink concept for the tower. This would mean going beyond simply being carbon-neutral, and making the building carbon negative building — meaning it will absorb more carbon dioxide than it produces over its lifetime.

The building’s design is, by all accounts, inspired by the human-like form of the mandrake plant.

While a nice idea in concept, could this building actually be made a reality?

The idea is to combine the very latest thinking in sustainable architectural techniques, such as maximizing the use of passive heating and cooling (e.g. stack ventilation), use of natural materials where possible, and incorporating a massive amount of vegetation.

But the design goes much further than that. The architects also envisage the building following a concept of “energy sobriety“. This concept calls for a shift in mindset when it comes to people’s use of energy.

It would involve making different lifestyle choices to minimize a person’s carbon footprint, and ultimately, impact on the environment.

For example, the building will be mixed-use, but not in the traditional sense. The design includes home offices that have been included to encourage residents to ditch the commute and enable them to work from the comfort of their own homes.

While the building is still in the conceptual phase, it may be a brief glimpse of the future of city living. Who knows, it may become the template for many future urban developments in the not too distant future!