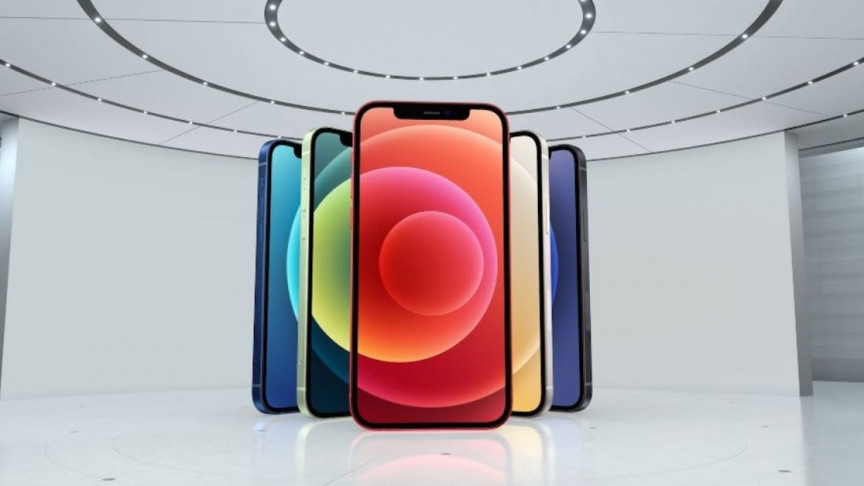 Apple is unveiling its latest smartphone model on Tuesday — the next-gen iPhone 12 — during an online-only event streaming live at 1:00 PM EDT, on Apple’s YouTube channel (featured below).

Apple’s iPhone Mini has the same capabilities as the iPhone 12.

At a compact size, it includes 5G, a Ceramic Shield, Super Retina XD, the A14 Bionic, a dual-camera system, and the MagSafe.

A MagSafe wallet will also be available.

The iPhone 12 will still use 4G LTE up to the point where 5G speeds are necessary — presumably to save battery life. The new phone will feature millimeter-wave 5G — which has repeatedly added an extra cost to 5G smartphones. This is why they are usually not included in several more affordable 5G-capable Android phones.

Additionally, Apple says its A14 Bionic chip has 50% more speed than any other smartphone chip available. It was the “secret chip lab” at Apple’s headquarters, and contains 4 cores.

The A14 features machine learning a full 70% faster than other devices — a bonus for developers working toward the next hit app. Gaming will also benefit from the A14 Bionic chip, according to the live stream.

“This is the start of something big,” said Apple CEO Tim Cook in the live stream. “We are going to introduce 5G across our entire lineup of phones today.”

The iPhone 12 returns to the straight edges of the iPhone 4 and 5 — but hopefully lack the antenna problems those phones suffered from.

The new smartphone will have a 6.1-inch (15.5-cm) display, in addition to a “ceramic shield” coating — presumably to prevent scratching with “four times” the protection of earlier models. The cover glass was manufactured in partnership with Corning.

iPhone 12 comes in white, black, green, blue, and a proprietary red. It’s thinner than previous models, with twice the number of pixels as the iPhone 11. Additionally, the new iPhone is keeping the dual-camera system — only the Pro line will have more.

All iPhones will support the MMW spectrum — the 5G Verizon claims is “ultrawideband.”

Additionally, Apple is working with more than 100 carriers to ensure 5G will be universally available.

For the first time, iPhone can access Verizon’s 5G ultrawideband — with a reputation for being the fastest 5G in the world, at 4.0 Gbps, with 200 Mbps — in ideal conditions, according to the live stream.

Verizon’s 5G Ultrawideband will give double the speed in cities like New York, and Los Angeles. Verizon is switching on its “5G Nationwide” network, according to the live stream.

It’s expected to reach more than 200 million people in the United States.

Apple unveiled the HomePod mini — a smaller HomePod aiming to offer service at a lower price. In essence, the company is offering the first entry-level HomePod.

The HomePod mini will sell for $99.

We expect the iPhone 12 to look more boxy, like the iPad Pro — in addition to faster processing chips and 5G wireless capability. Let’s review what we know so far about the iPhone 12’s price, release date, and a handful of features Apple should probably take from Samsung.

Apple fans have awaited the new iPhone with bated breath, and industry experts have reported every single available detail of information available on the new device.

The iPhone 12 is the first substantial revamp of the basic design since 2017 — when Apple debuted its $1,000 iPhone X, which had a new face-mounted unlocking system, along with better screen technology. A survey from a device recycler and reseller called Decluttr reported that a “staggering” 53% of respondents are readying to buy this year’s iPhone, which analysts believe will launch a “supercycle” of phone upgrades, reports CNET.

“We believe iPhone 12 represents the most significant product cycle for Cook & Co. since iPhone 6 in 2014 and will be another defining chapter in the Apple growth story looking ahead despite a softer consumer spending environment,” wrote Daniel Ives, a Wedbush analyst in an Oct. 6 investor note, News Break reports.

He added this launch was a “once in a decade” move for Apple.

Interesting Engineering is providing live coverage of Apple’s event — where the iPhone 12 will debut for the first time. As the third significant product unveiling since the coronavirus crisis began, be sure to check-in with us for the latest updates.