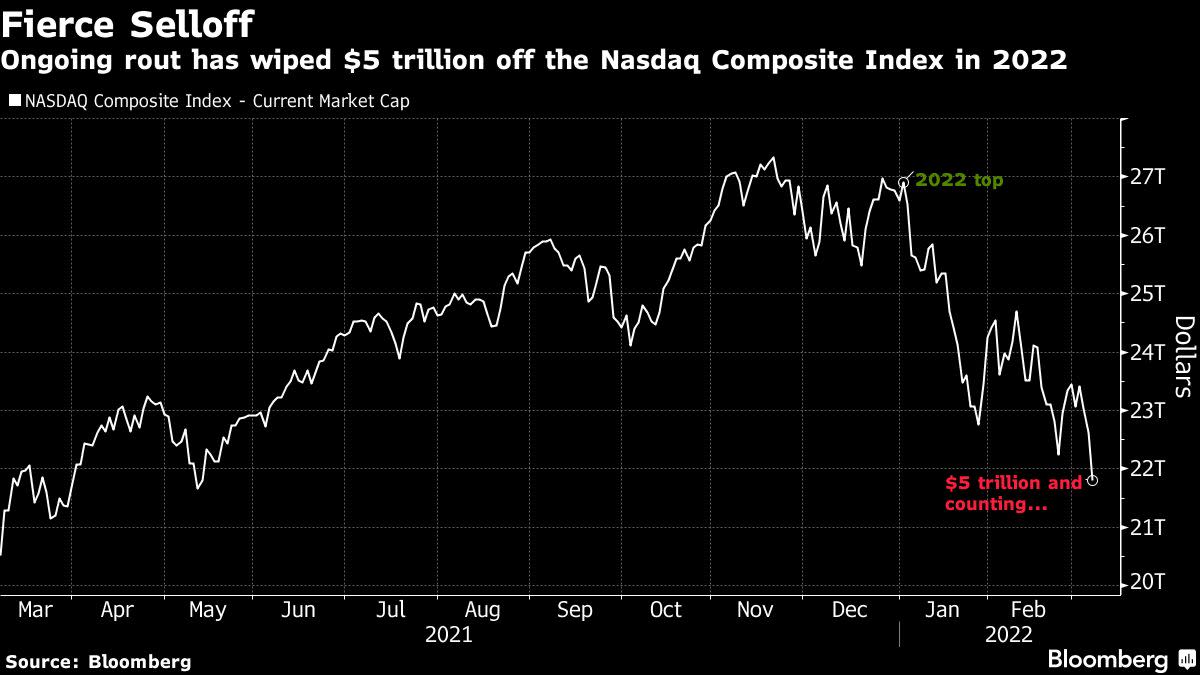 (Bloomberg) — As the Nasdaq 100 Index once again threatens to fall into a bear market, Apple Inc. is living up to its reputation as a relative haven in a turbulent time for tech.

Most Read from Bloomberg

While the shares have declined in 2022, the iPhone maker is the best performer among mega-cap companies, with a 10% drop versus an 18% retreat for the Nasdaq 100 Index. Investors have gravitated toward Apple as they seek out high-quality investments in an environment marked by faster inflation and growing concern that Russia’s invasion of Ukraine will trigger a recession.

With analysts skeptical about a near-term turnaround for the stock market, Apple has plenty of appeal. The company doesn’t have the kind of nosebleed valuation seen elsewhere in the sector and it reported strong quarterly results in January. Bulls may find further reasons for optimism Tuesday when the company hosts a product event where it’s expected to unveil new versions of its iPhone, iPad and Mac lines.

“Apple offers moderate growth at a reasonable price, which right now is better than an aggressive growth name,” said Dan Veru, chief investment officer at Palisade Capital Management. “Since volatility should remain high, it makes sense to pay up a little for a quality name with good profitability and a high return on equity.”

The stock’s relative resilience was on display on Monday, when the Nasdaq 100 sank 3.8%. While Amazon.com Inc. dropped 5.6% and both Meta Platforms Inc. and Nvidia Corp. shed more than 6%, Apple’s decline was 2.4%.

Apple is appealing in part because investors have found relatively few places to hide. Gold has jumped to a 19-month high, and oil and other commodities have soared. Cryptocurrencies, however, haven’t mounted a sustained rally, disappointing some bulls who had expected them to provide more of a haven. And 10 of the 11 broad sectors in the S&P 500 are down this year, with energy the only exception.

While Apple shares have historically slipped on the days when it unveils new devices, Wall Street is positive on the event. Bank of America Corp. wrote that a new version of the iPhone SE can help Apple gain market share in lower price bands, and it sees “multiple tailwinds” for both hardware and services. Wedbush wrote that new products speak to Apple’s ability to navigate supply chain issues, calling the stock “a safety tech name to own during this market storm.”

Tech Chart of the Day

The $5 trillion of market value that’s been wiped off the Nasdaq Composite Index in 2022 speaks volumes about what a tough year it’s been. First, the Fed’s aggressive tightening caused a selloff, and then the war worsened it, tipping the index into a bear market for the first time since March 2020.

Most Read from Bloomberg Businessweek