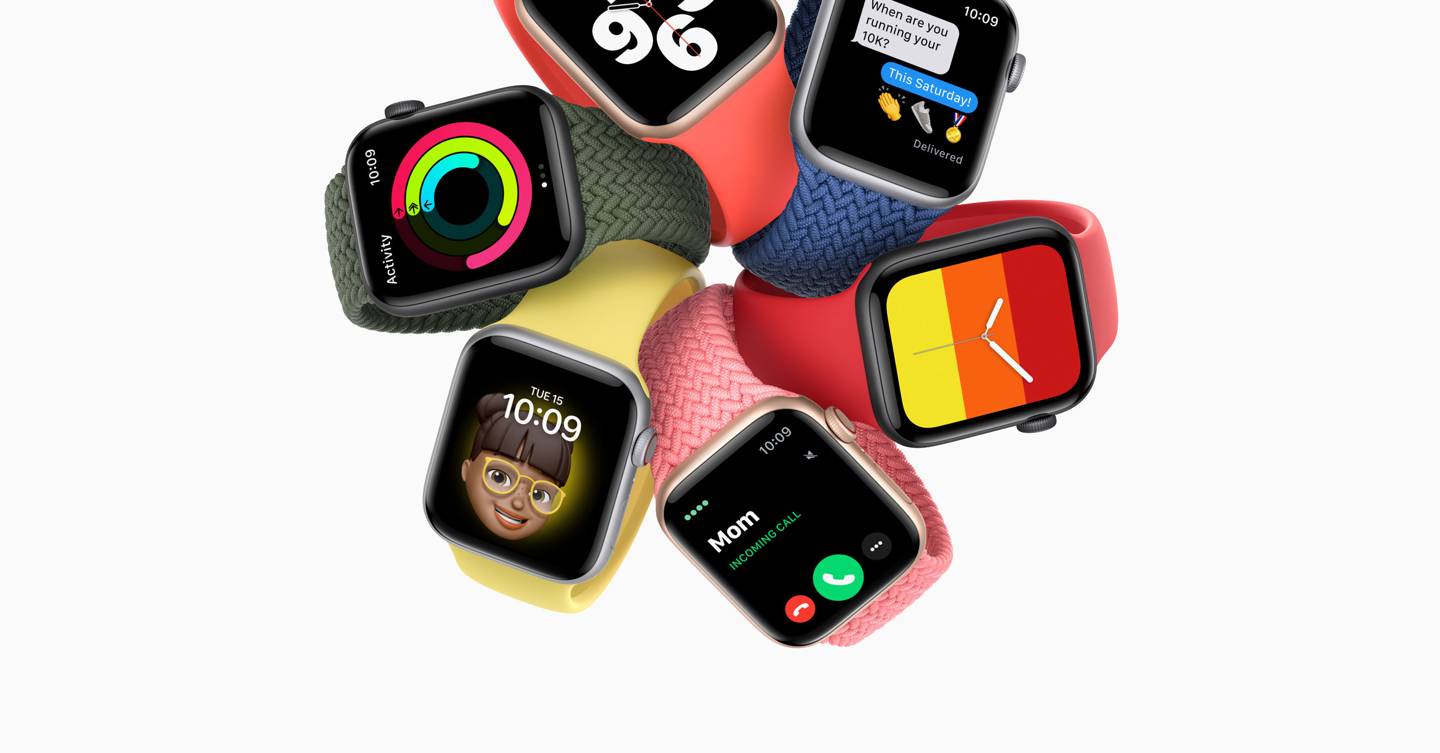 In yet another much-leaked event, this time mercifully without the usual hooting, evangelistic audience, Apple has unveiled a raft of new wearables, including the Apple Watch Series 6 and two new iPads, but perhaps more interest has been focused on what was not announced – the new iPhones.

You can expect more on those new handsets in the next month or so. But for now let’s dig into everything that was announced from hardware to Apple’s growing range of services.

The new iPad Air is a substantial Pro-style redesign of Apple’s mid-price tablet, one intent on maximising what is squeezed out of a familiar footprint.

Apple’s previous iPad Air had a 10.5-inch screen, increased to 10.9 inches in the new tab. This comes with a slight change in resolution and aspect ratio. It’s a 2360 x 1640 pixel LCD screen that pushes much further into the screen surround.

The 2019 iPad Air has relatively large screen borders compared to those of a Samsung Galaxy Tab S6, but Apple has caught up.

This also means there’s no longer room for the classic Touch ID sensor. But Apple has not switched to an in-screen scanner. The fingerprint reader now lives in the iPad’s top button. It’s an optical sensor that sits below a layer of Sapphire glass.

Apple says this is the smallest authentication sensor it has made to date, and there’s even a tactile switch to provide the same style of feedback as the classic Touch ID design.

All the core iPad Air screen design elements remain the same. It’s a fully laminated display with an antireflective coating and colour calibration to match the DCI P3 colour gamut. It’s excellent, in other words.

The iPad Air’s speakers have been redesigned to (more or less) match the experience of an iPad Pro. There are two speakers, not four like a Pro, but as they sit on each end of the tablet you’ll hear full stereo sound when watching video in landscape orientation. It’s not a particularly flashy upgrade, but is one that actually affects your day-to-day experience with the thing.

Want flashy? That’ll be the Apple A14 Bionic processor, then. This is a 5nm CPU, using even smaller transistors than the 2020 iPad Pro’s A12Z Bionic. The A14 Bionic may not be as powerful, with six CPU cores instead of eight, and four GPU cores instead of six. But Apple still makes big claims about its performance over the previous iPad Air.

It says the CPU is 40 per cent more powerful, the GPU 30 per cent. And the peak performance of its Neural engine, used in AR apps and others, is up to ten times better.

Apple’s iPad Pro will come in six colours, including unusual-for-a-tablet “sky” blue and green. It will start at £579 for Wi-Fi only models, £709 for those with 4G, and be available from October.

This is the new flagship Apple Watch – the Apple Watch Series 6. It comes in a variety of new colours including blue with an aluminium case and Apple Product Red. You can measure your blood oxygen levels right from your wrist in just 15 seconds, clearly a useful tool during the pandemic. Apple even brought out its own staff doctor to explain a bit about what blood oxygen saturation is and detail how the company is partnering with academics to help investigate conditions like asthma and (obviously) Covid-19.

Series 6 has an improved always-on display, which Apple says is two times brighter than the Series 5. It also has an always-on altimeter for measuring the elevation, perfect for hilly hikes. And, as expected, there’s a bunch of new watch faces. Many of these will be available on all Apple Watches, but there are some exclusive to Series 6. The company has even made a watch face specifically for photographers and another one for surfers.

Parents will now be able to set up an Apple Watch for their kids, even if the children don’t have an iPhone. It requires cellular connectivity, however. But it will let parents keep in contact with children in a limited capacity without needing to buy a separate iPhone.

Of course, there’s a bunch of new wristbands as well. One it calls a Solo Loop band, which has no buckle, is completely swim-proof and comes in seven different colours, plus a new braided wristband, too, in the same design.

Apple’s most popular iPad, the affordable 10.2-inch one, gets a humbler set of upgrades. It looks much like the older tablet, but now has an Apple A12 Bionic processor in place of an A10 Fusion.

To map this onto iPhone generations, the old iPad 10.2 has the same processor as the iPhone 7. The iPad 8th Generation has the brains of the iPhone XS. It is quite the leap.

The A12 Bionic is a six-core CPU with a quad-core GPU. Apple says it has twice the graphics power and 40 per cent greater CPU power. Having used phones with both processors, we have no reason to doubt these claims.

A multi-generational leap in processor tech, from a 2016 CPU to a 2018 one, also means the iPad 8th Generation is the first budget iPad with a neural chip. This is a co-processor specifically designed for the kind of fast, high instruction load tasks involved in augmented reality and certain types of image editing.

It means quicker touching up of photos and much better compatibility with augmented reality apps. But iPad buyers are more likely to be interested in how apps like Fortnite run, if that game is able to run on iPad by the time this one comes out anyway.

The performance of the iPad 8th Generation will be unmatched by any Android tablet at the price. Samsung’s closest competitor, the Galaxy Tab S6 Lite, has a Samsung Exynos 9611 CPU. This wilts next to the A12 Bionic in benchmarks like Geekbench 5, earning fewer than half the performance points.

Apple’s iPad 8th Generation may not excite like an iPad Air, but the performance it offers for £329 will be superb. We don’t recommend the base model to most, though, as it has just 32GB storage.

Apple has also launched its new “cheaper” Apple Watch SE, which will sit between the new Watch Series 6 and the old Series 3. Inside the SE is the same S5 chip you got in the Series 5. It also has the accelerometer, gyroscope and altimeter users get in the top-of-the-range Series 6, as well as the fall detection, Emergency SOS, international emergency calling and Noise app features.

Apple says that this new SE watch has also been developed to complement its new Family Setup feature in watchOS 7, which allows an Apple Watch to be set up through a parent’s iPhone so that children and older family members who don’t have an Apple phone can use the wearable.

Two sizes are on offer, 44mm or 40mm, available in three finishes (gold, silver, space grey) made from recycled aluminium, and yes it can sport the new Apple Watch buckle-free Solo Loop and Braided Solo Loop bands. The Watch SE is available for pre-order today, and on sale Friday.

We expected to see hardware at this September’s launch, but Apple has also announced a major new service, Fitness+. This is Apple’s Peloton equivalent – and there is no £2,000 smart bike to buy.

However, you will need an Apple Watch. You’ll choose a workout type on your iPhone, Apple TV or iPad, and the session will be guided by a trainer with the kind of high-quality video production you’d expect from Apple.

There are ten types of workout, including yoga, treadmill walks and runs, cycling and HIIT. You’ll see your metrics on-screen, such as your heart rate and calories burnt, send from your Watch.

Fitness+ is intended to be the kind of fitness platform any Apple Watch owner can get on with. No additional equipment is required for many workouts, so you could play a workout at the gym, or on the old hand-me-down exercise bike your parents only ever used as a clothes horse.

This means there’s no cadence or power meter to judge your speed on a bike, and no direct connection to a treadmill to determine speed. Apple says it makes up at least some of the difference in stats retrieval using “on-device intelligence”, as it already does with, for example, treadmill running using an Apple Watch.

Apple Fitness+ costs £9.99 a month and will be available by the end of the year in the UK. Buy an Apple Watch and you’ll get three months free.