Apple Acquires More AI Startups Than Any Other Tech Company 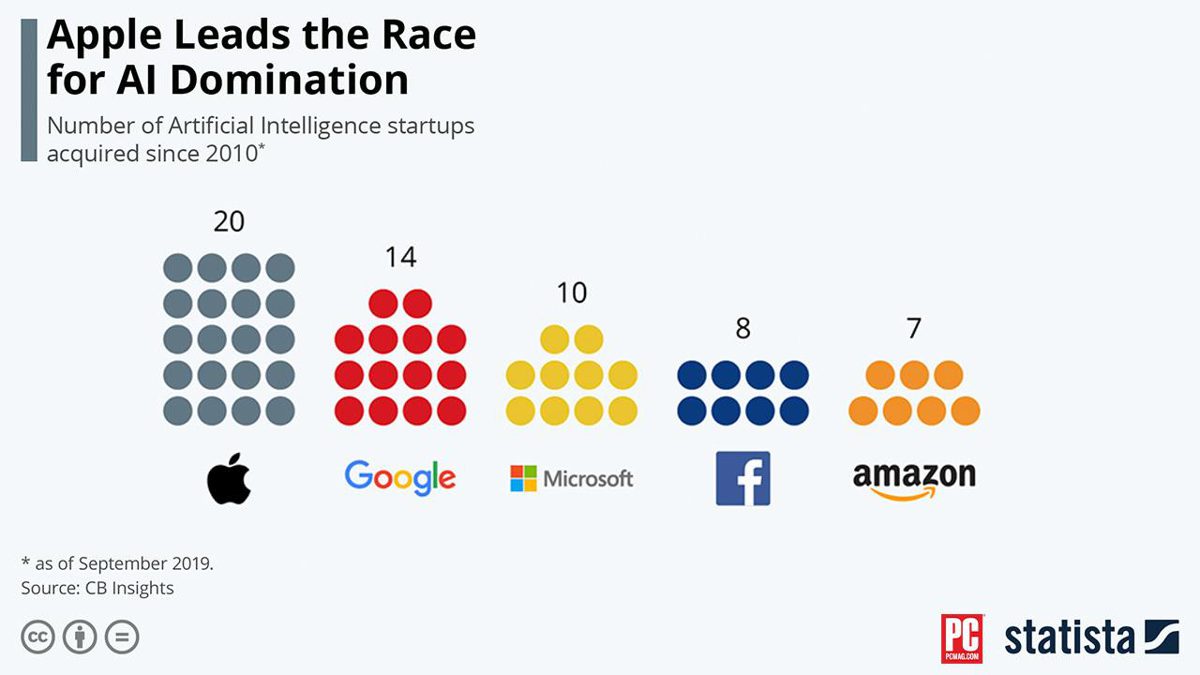 The market for artificial intelligence has exploded over the last decade. While platforms such as Amazon’s Alexa, Apple’s Siri, Google’s Assistant, and Microsoft’s Cortana have dominated the market, these companies have not been the source of that growth. Instead, stiff competition between the biggest corporations has led to aggressive acquisitions of AI startups.

According to data compiled by CB Insights, there have been a total of 635 artificial intelligence acquisitions between 2010 and September 2019. Those purchases also increased six times over from 2013 to 2018, with 166 acquisitions in 2018 alone—a 38 percent increase year over year. For companies like Apple, Google, and the rest, these purchases can almost always be linked back to a new product or feature.

Leading the charge is Apple, with 20 acquisitions since the 2010 purchase of Siri. As an example, the tech giant acquired Novauris Technologies and Voysis to improve speech recognition of its voice assistant platform. Apple has also bought companies including Perceptio and RealFace to develop its Apple ID technology.

Microsoft has bought 10 startups, Facebook has acquired eight, and Amazon purchased seven in total. Of the 489 companies to buy an AI startup over the last decade, 431 of them purchased only one company. That means these tech giants—and Apple, specifically—are dominating this AI arms race.

Unfortunately for Apple, it doesn’t seem like all this spending has resulted in an AI platform that dominates the market. According to the Voice Platform Impact Ranking, which factors in both consumer adoption and ecosystem support, Siri has fallen behind the competition. On a scale of -250 to 250, Alexa currently scores at 110.2 and Google scores at 97.3, while Siri sits at a mere 38.3 in front of Samsung’s Bixby.

So far, the Siri ecosystem has failed to expand beyond the iOS operating system. Meanwhile, Google Home and Amazon Echo devices feature robust support from many third parties. It would seem that money spent doesn’t necessarily equal long-term growth or success, but Apple continues to make acquisitions in 2020.