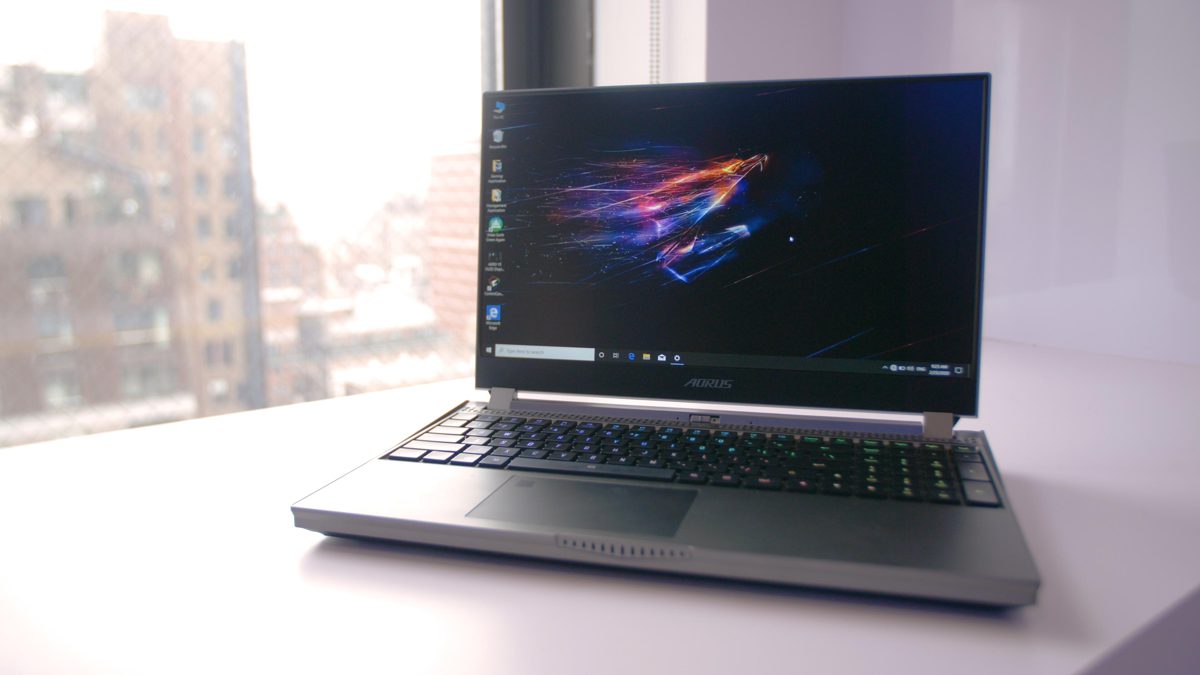 A new gaming laptop with giant air grilles and a mechanical keyboard, the Aorus 15G (technically, from Gigabyte) proves that the Taiwanese tech company sees a future in big, bold gaming rigs. Aorus is the component maker’s gaming sub-brand.

Actually, the Aorus 15G is pretty light for a deluxe gaming rig with a 15.6-inch screen, weighing in at less than 5 pounds. (The company will also offer a 17-inch version, the Aorus 17G.) It’s not particularly thin, and it’s got the aggressive styling and ostentatious feature list from which Razer, Alienware, and many other big-name gaming-laptop makers have distanced themselves in some of their efforts of late. 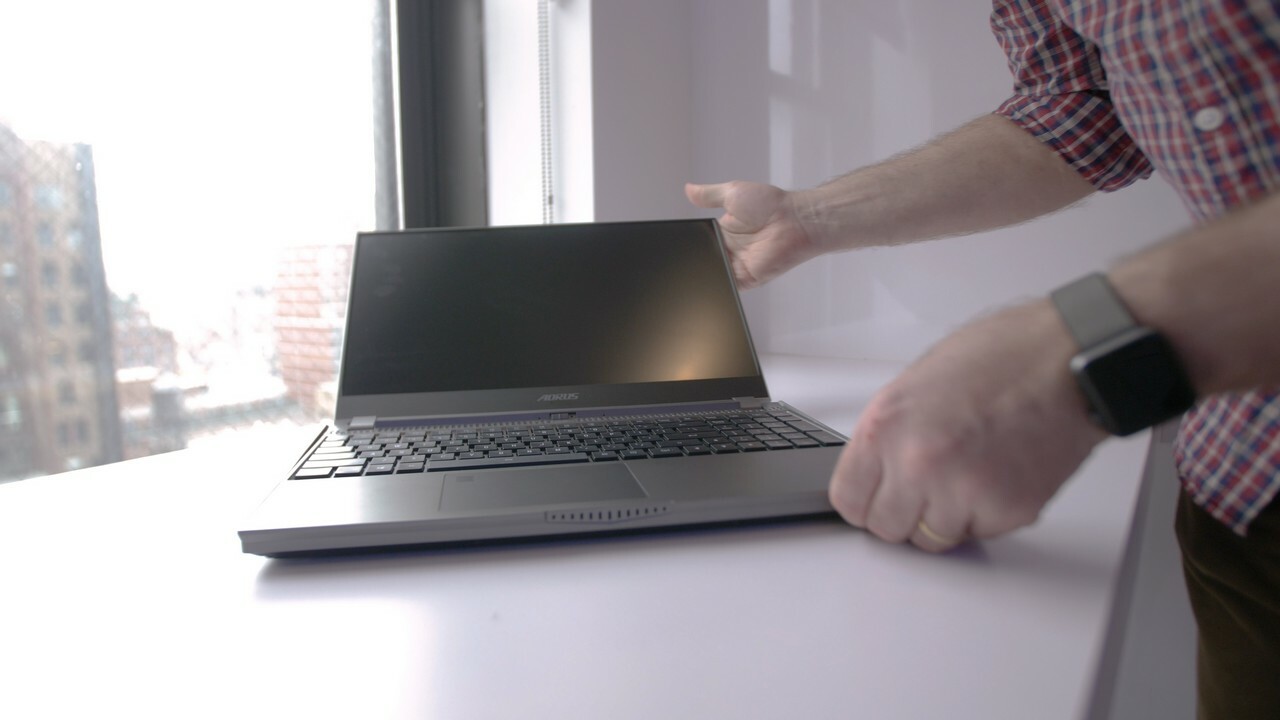 Part of the Aorus 15G’s claim to fame—and the reason for its unveiling this week in the United States—is that it offers Intel’s brand-new 10th Generation CPUs. These new H-series chips, announced earlier this month, could combine with the available Nvidia GeForce RTX 2000-series graphics processors (including the company’s new GeForce RTX 2070 Super and RTX 2080 Super GPUs) to make the Aorus 15G as fast at displaying frames as its aggressive styling suggests. (Check out our rundown of new gaming and creative-pro laptops with 10th Generation H-Series chips and GeForce RTX Super GPUs.)

We won’t know for sure until we get our hands on a review unit whether the performance lives up to the promise, but Gigabyte was still kind enough to drop by PC Labs some weeks back to let us ogle an early sample of the Aorus 15G for a little while. Here are our first impressions.

Two 12-volt fans, each with 51 blades, continuously pump out hot air from the depths of the laptop. The air exits through four enormous exhaust vents that run the length of the laptop between the display and the keyboard. The fans ran at maximum speed as soon as the laptop powered up during our demo, and they were loud, even in a noisy office. We’ll have to see if this gets addressed in shipping versions of the laptop. (We hope so.) 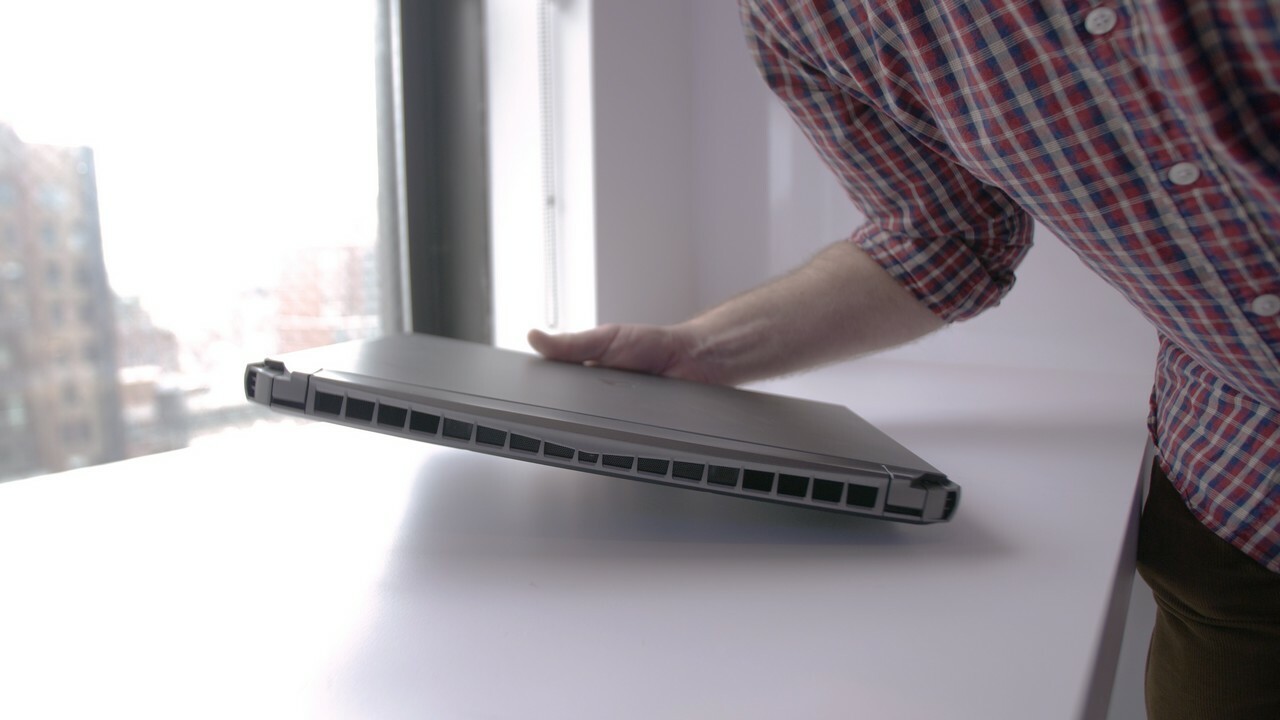 Air intake happens through even larger grilles on the underside of the Aorus 15G’s chassis, and a total of five internal heat pipes keep all the air moving where it needs to go. Three of the heat pipes are dedicated to dissipating the heat that the CPU and GPU generate. 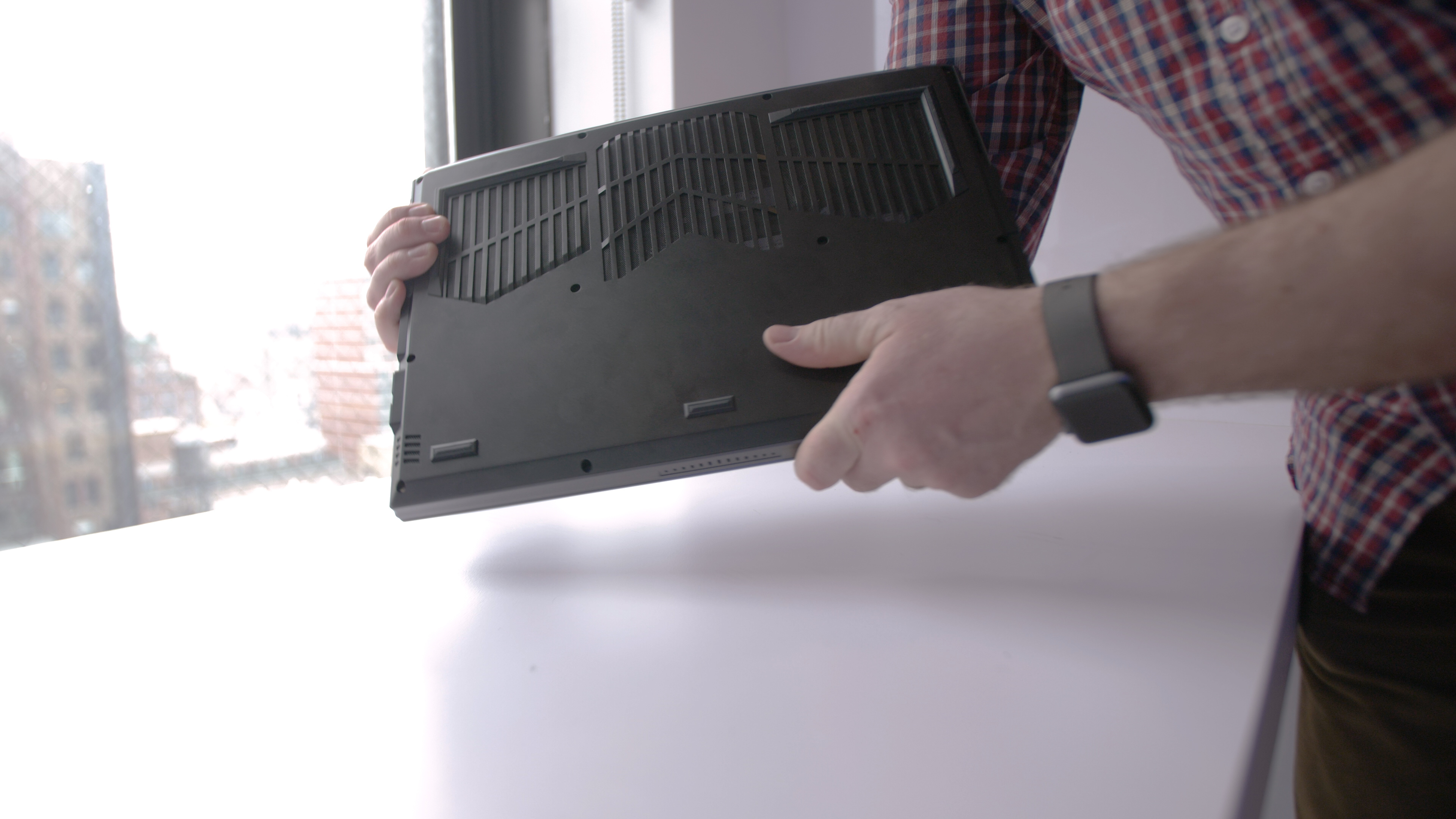 All told, Gigabyte claims that the cooling system is 30 percent more efficient than the ones on older Aorus laptops.

Putting a mechanical keyboard into a laptop has been done before, if not always to critical acclaim and usually in behemoth machines. (Check out our reviews of the Aorus 17 from 2019 and the older, legendary MSI GT75 Titan, both serious bruisers.) Mechanical key switches take up a lot of room, and shrinking them to fit into a laptop chassis sometimes defeats their purpose of offering hyper-accurate strokes. 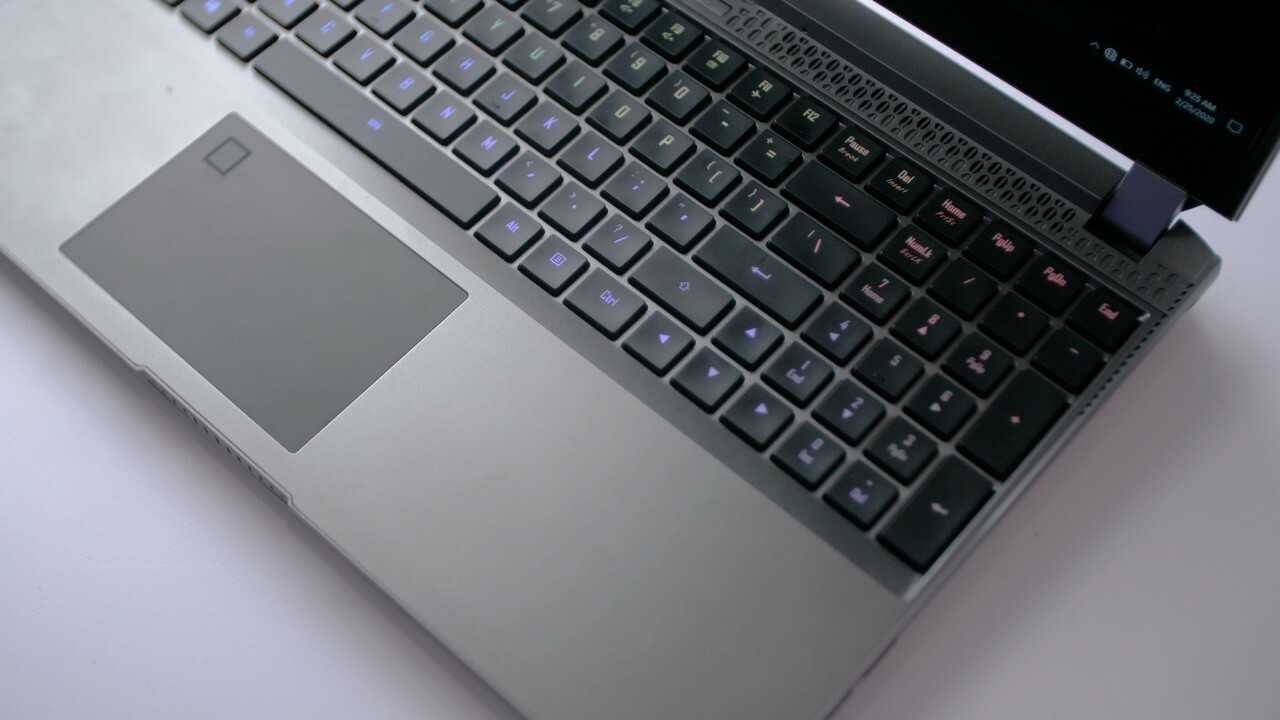 Still, hardcore gamers swear by them, so Gigabyte opted to put a mechanical board in the Aorus 15G. The 2.5mm vertical travel distance is impressive—most laptops manage only around half that. And the mechanical switches themselves come from Omron, a well-known Japanese supplier of switches whose products also appear in the Das Keyboard X50, among other desktop boards. These keys’ actuation point is 1.6mm, less than half of the total travel distance. That suggests they’re a happy medium between the near-immediate actuation that fast-twitch FPS players prefer, and the longer actuation needed for other genres (and, for most folks, accurate typing). 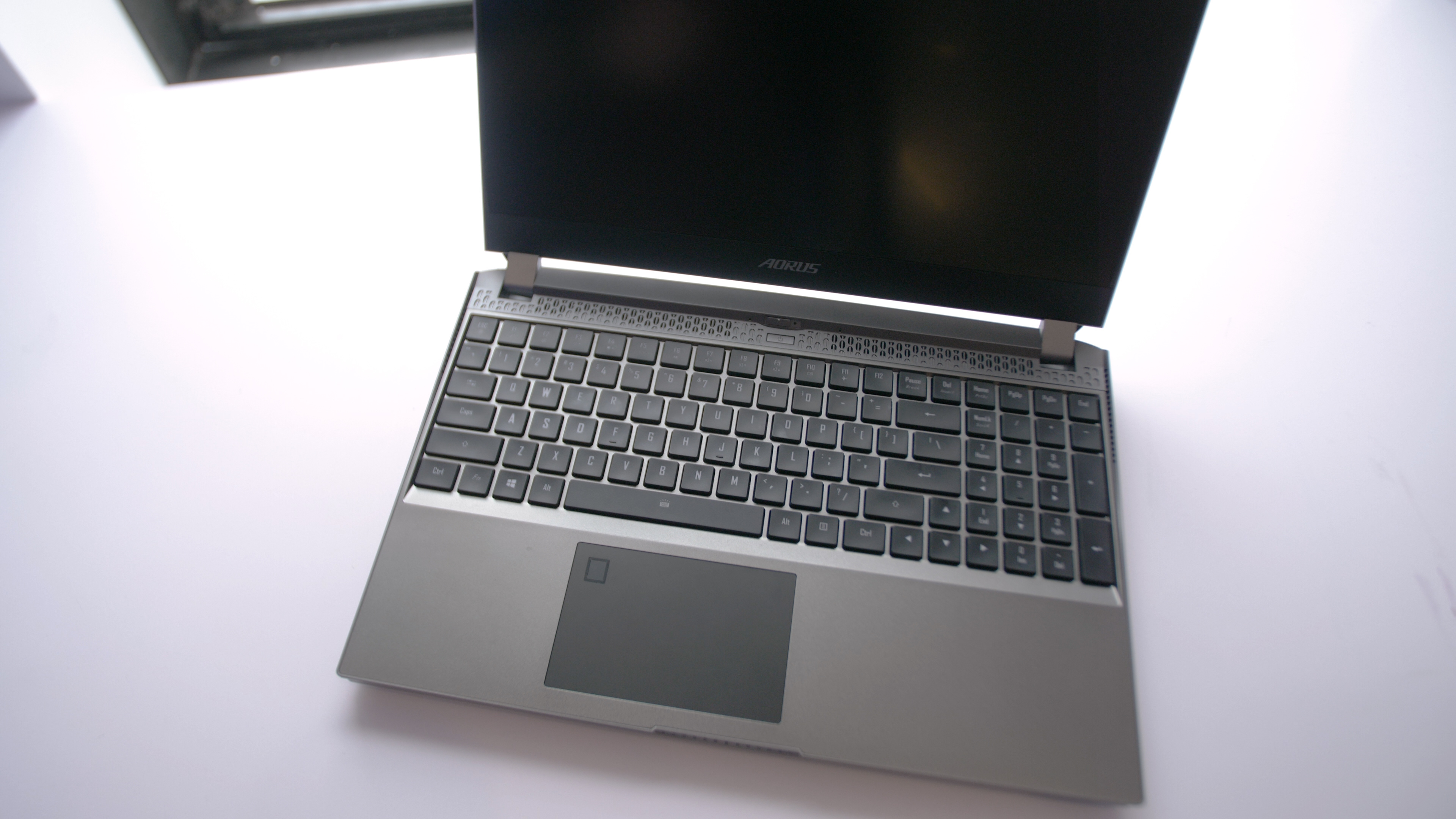 After typing just a few keystrokes, it’s clear that the Aorus 15G has a better keyboard than most other gaming laptops. I’m less convinced, though, that the added height to accommodate the increased travel distance will be worth it for every buyer. The Aorus 15G stands nearly an inch tall, compared with around 0.7 inch for more-portable gaming laptops like the Asus ROG Zephyrus G14. 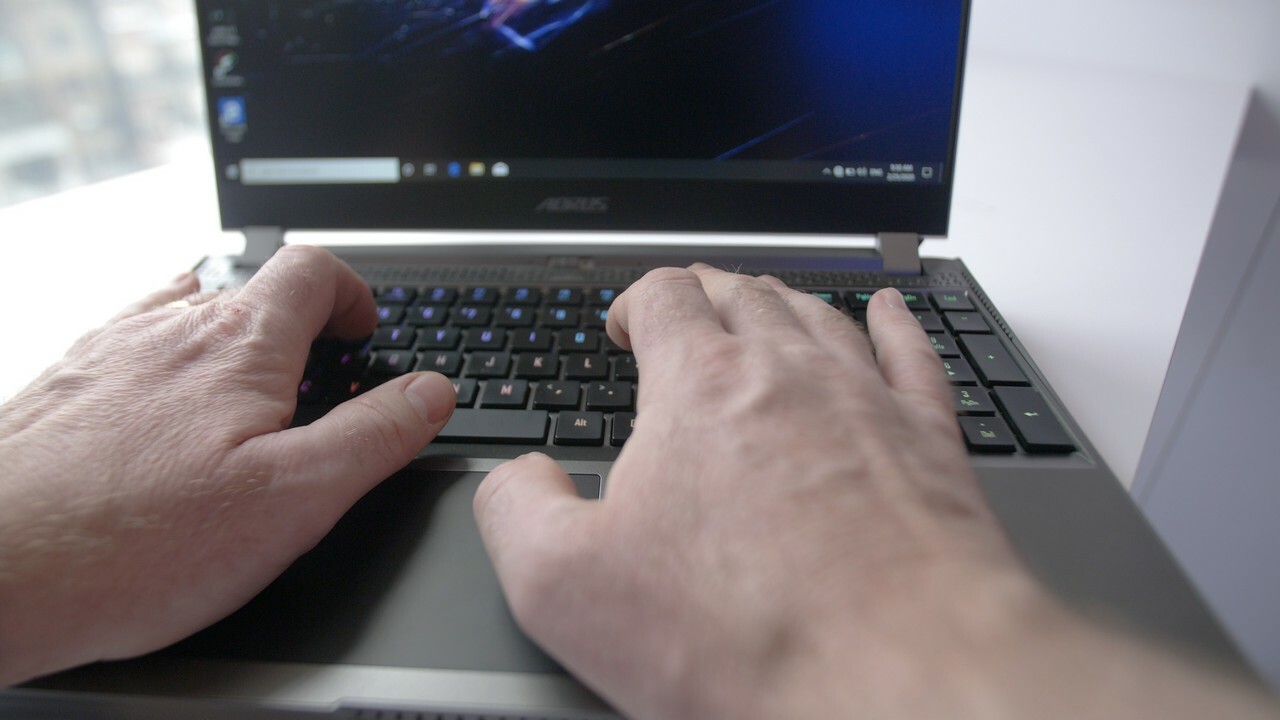 Moreover, I’m no big fan of the 1980s-era font that adorns the Arous 15G’s keycaps. It’s hard to read, and far from sleek-looking. Gigabyte uses this font or a similar one pretty consistently on its gaming laptops, and at best they clash with the rest of the aggressive aesthetic.

Get Your Game On

The full HD (1,920-by-1,080-pixel) display on the Aorus 15G comes in either 144Hz or 240Hz variants. Serious fans of games with lower graphics complexity (and competitive esports types) should consider the higher-refresh version, especially if they pair it with one of the more powerful GPU options. Achieving more than 140 frames per second (fps) on a game like Counter Strike: Global Offensive is well within the realm of possibility for an Aorus 15G equipped with an Nvidia GeForce RTX 2080 Super GPU. 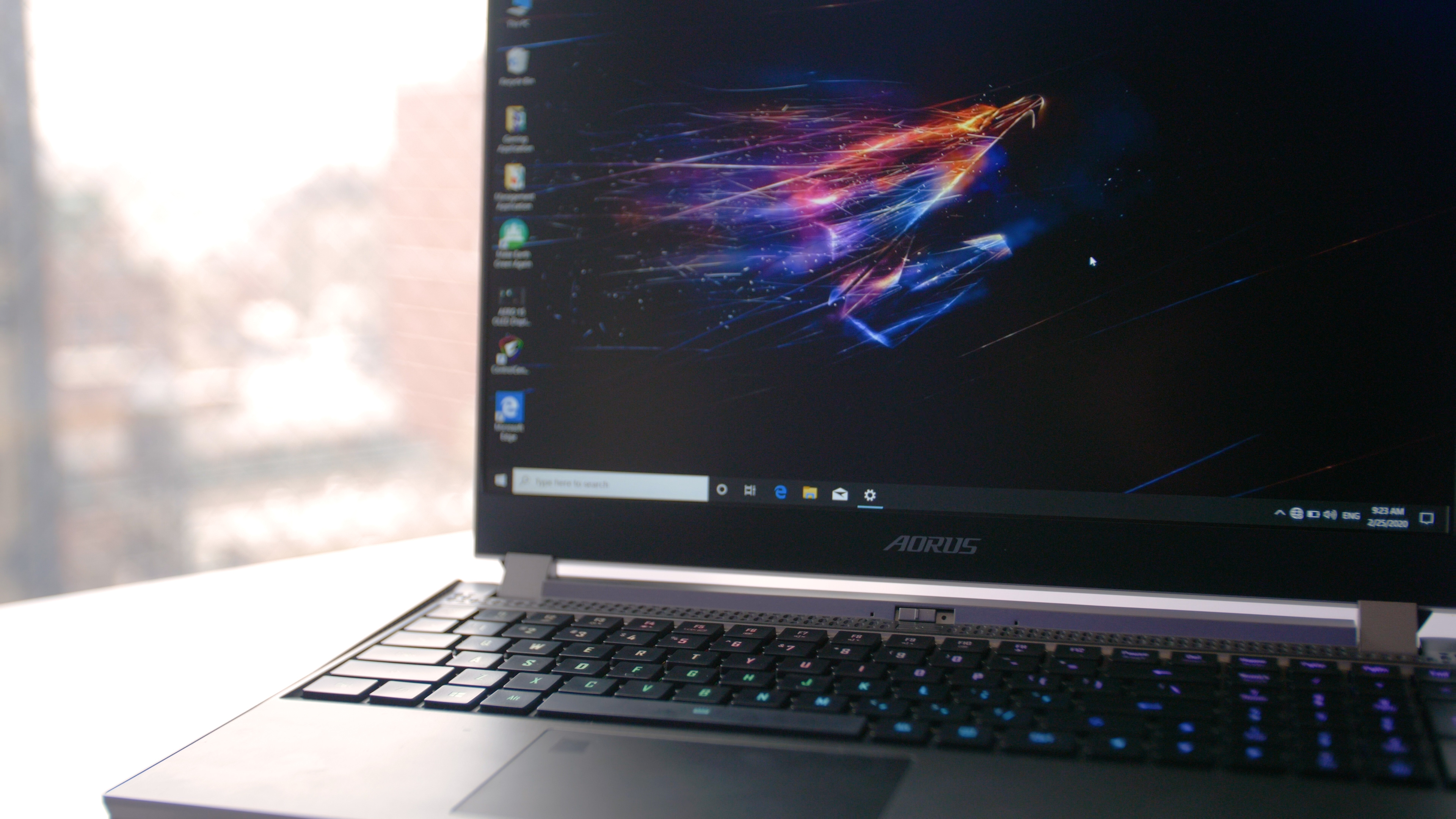 Other GPU options for the Aorus 15G include the GeForce RTX 2070 Super, the GeForce RTX 2070 Max-Q, the GeForce RTX 2060, and the GeForce GTX 1660 Ti. We don’t expect all of those to be available in the United States immediately, but it’s nevertheless an admirably wide selection. We also don’t yet know how Nvidia’s GeForce RTX Super GPUs will perform on production laptops; these chips are so new that we haven’t seen enough models to generate a base of reliable benchmark results. (We were just testing the first couple of them as I put the finishing touches on this article.)

Likewise, the 10th Generation Intel CPUs are also so new that we are testing the first samples just now. Gigabyte says the initial offering for the Aorus 15G will be the eight-core Core i7-10875H. This chip’s claim to fame is its remarkably high 5.1GHz maximum boost clock speed. If the Aorus 15G’s extensive cooling hardware performs as well as Gigabyte says it will, the Core i7 could very well spend much of its time close to that lofty maximum. That might give AMD’s new—and also incredibly powerful—Ryzen 4000-series “Renoir” chips a run for their money.

That Webcam: Groom, Ahem, Your Nostrils

The brief era of oddly-positioned laptop webcams is mostly behind us, a byproduct of laptop makers wanting to shrink screen bezels (where the camera usually goes) before they figured out how to shrink the webcam enough to squeeze them in. Many manufacturers have now figured this out, but apparently not Gigabyte.

The Aorus 15G’s webcam, alas, is mounted near the display hinge, where it will likely capture impressive views of your knuckles as you type, plus upward views of your chin and nostrils as it captures your face. 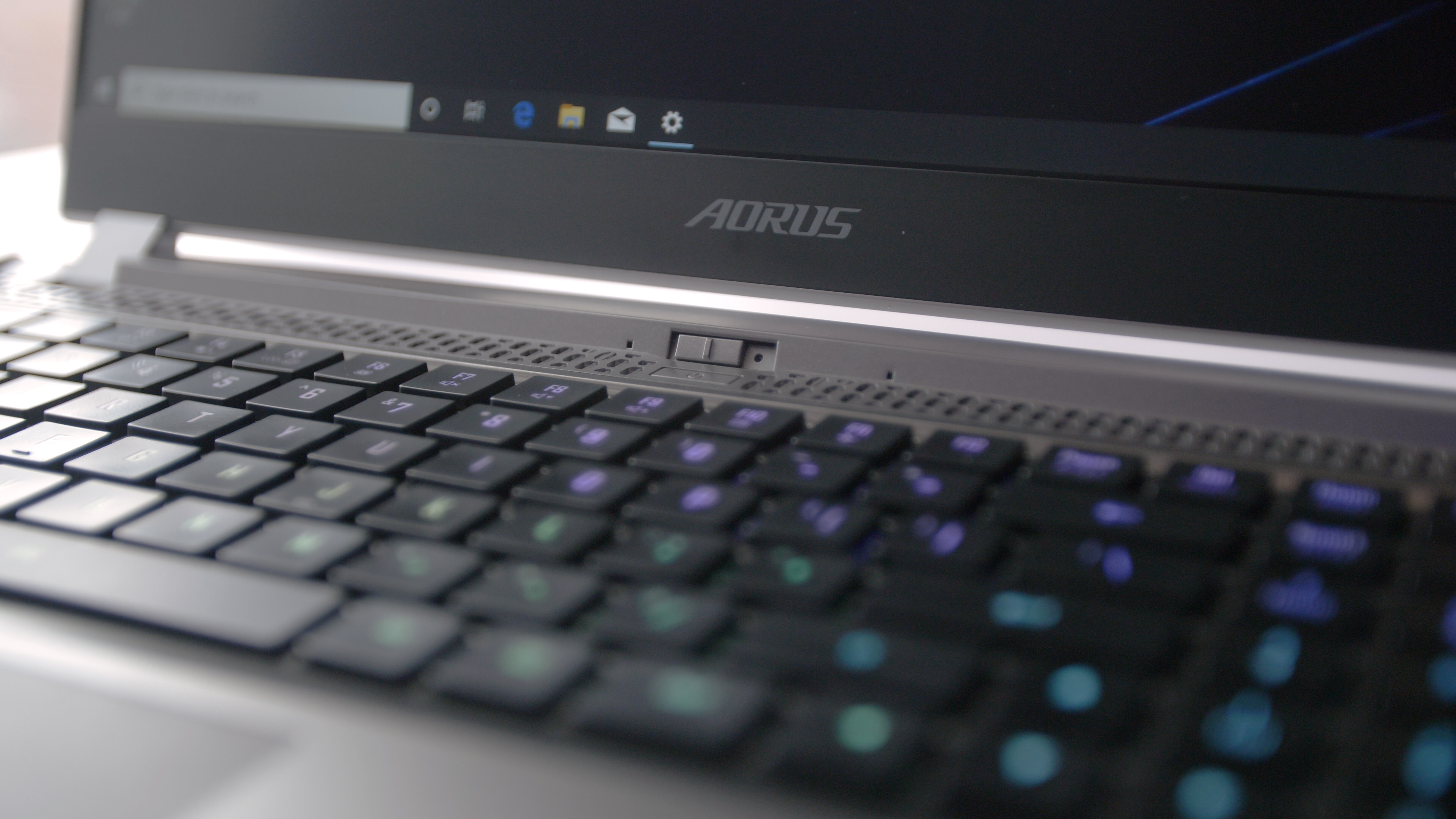 At least you do get a decent mix of ports on the Aorus 15G to let streamers plug in a better-positioned external camera. In addition to plenty of USB Type-A ports and an HDMI output, there’s also a mini DisplayPort output and an Ethernet jack backed by gamer-friendly Killer Networks silicon. Dedicated Ethernet jacks are starting to go missing even on some larger gaming rigs these days, but some gamers will find one non-negotiable. 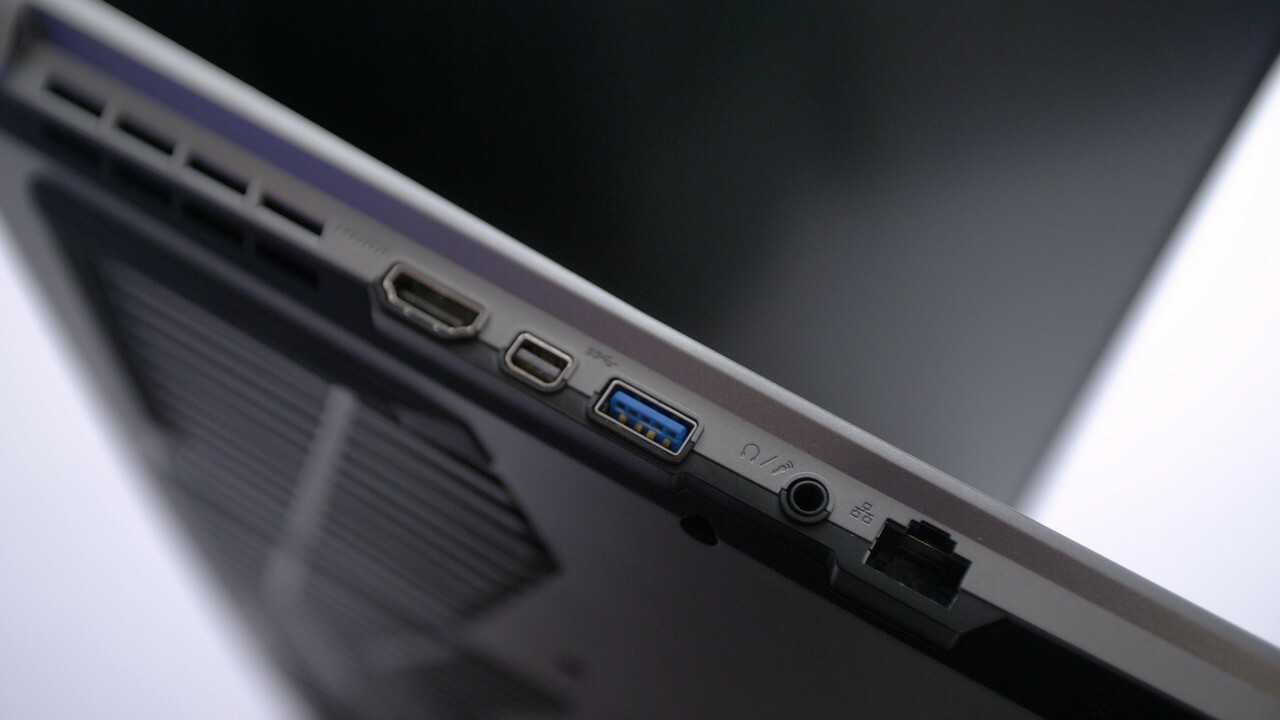 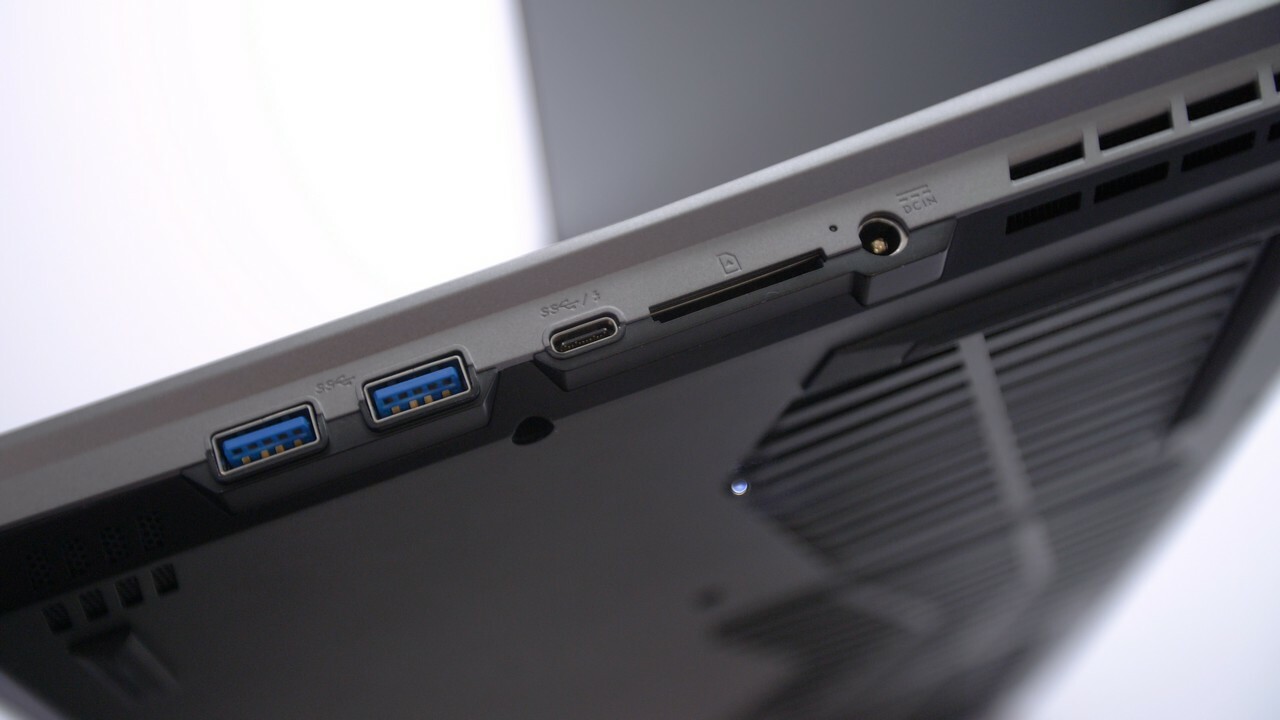 We expect to get the Aorus 15G and several more Intel 10th Generation and Nvidia GeForce RTX Super gaming laptops in the labs this spring. (As mentioned, we have a couple in the works at the moment.) Stay tuned for our full review.