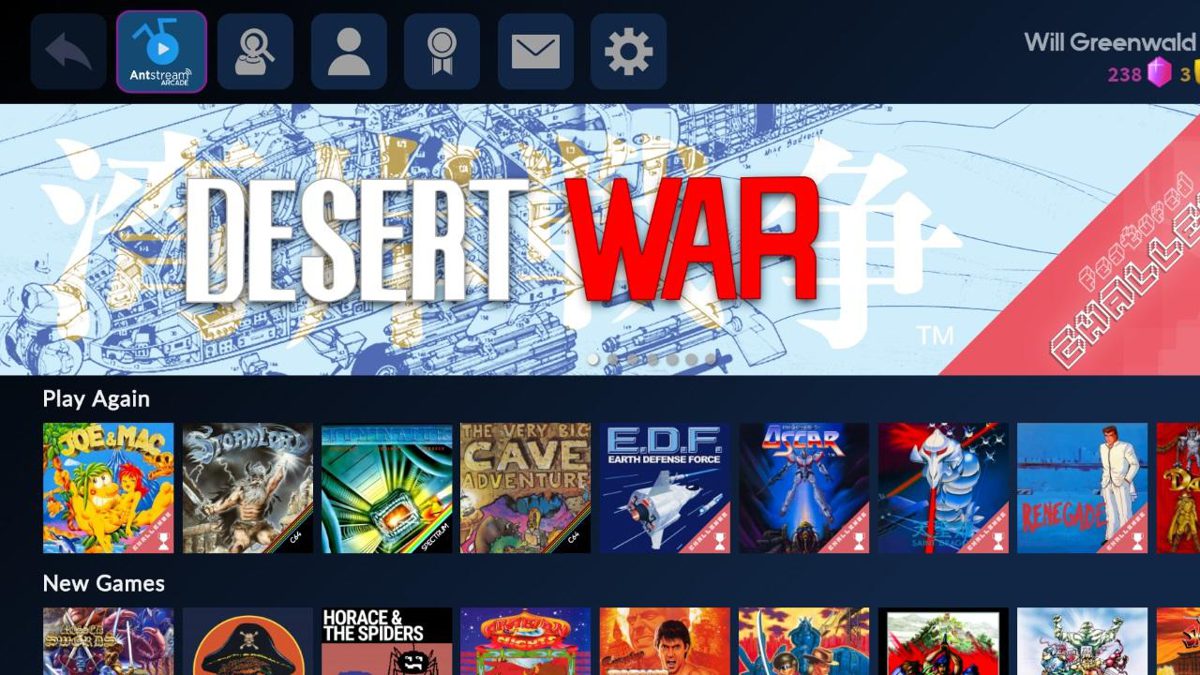 Game streaming services are usually designed to let you play games on hardware that won’t easily run it. AntStream is different in that it focuses almost entirely on games small and old enough to run on a flip phone. Its selection is what really sets the €9.99 monthly (approximately $10.80) service apart. AntStream places a heavy emphasis on ’80s-era arcade and non-PC computer games for the Commodore Amiga, Commodore 64, and Spectrum ZX. It has one of the biggest libraries of any game streaming service, with easily the oldest titles in it. That makes it a niche service that will most appeal to Gen X arcade and computer fans, but it’s interesting enough for anyone to try out as a history lesson.

AntStream is a streaming service like GeForce Now or Google Stadia, which means the games run on remote servers and use your network connection to send audio-visual information to and accept inputs from your device. This means you need to be online to use AntStream.

Specific network speed requirements haven’t been announced, but AntStream says the service can work over a 4G connection, but will work best over Wi-Fi or an Ethernet connection to your home network. AntStream’s interface is very TV-oriented, even for the PC version. You won’t have much luck browsing the long rows of games with a mouse; a compatible gamepad is recommended for even just looking through the service’s library, or at least with the arrow keys on your keyboard. On the bright side, the controller-centric setup is very good at detecting your gamepad and mapping each game correctly to its controls, displaying a helpful button layout when you load it. Not all games work well with gamepads, though; for text adventures and other computer games on AntStream you can simply use your keyboard. I found that Spectrum ZX games in particular generally demand keyboard fiddling.

Achievements, challenges, and leaderboards are built in, with achievements providing personal milestones across the service and challenges offering individual missions in dozens of games that feature them. Persistent leaderboards track your high scores in games that keep score, so you can compete with other AntStream members at overall skill. Challenges offer individual prompts, like getting as high a score as you can without firing your weapon, or defeating as many enemies as possible with one life, and load you into a special state of that game specific to the challenge. Passing certain thresholds awards bronze, silver, and gold medals, and adds your status to leaderboards that can be seen across the service. Every game that supports challenges has a selection of five, but only one is available at first. To unlock even more difficult challenges, you need to accumulate red gems by completing challenges and getting achievements, and spending those gems as currency. It feels like an unnecessary extra step that gamifies the service a bit too much, adding a limited resource to your ability to access challenges in a service you’re already paying for. There’s also an experience and leveling system for your user profile, but it doesn’t seem to have much purpose.

If you need some help, AntStream lets you use save states to preserve your games in the middle of action. Each game has three save states. Arcade games also let you add as many credits as you want while you play, so you can keep gaming like you’re standing in front of a cabinet with a sack full of quarters.

The list of games on AntStream is massive and ancient, with few of the 1,000-plus games on the service made after 1990. There’s a heavy emphasis on arcade titles, along with games for the Amiga, Commodore 64, and Spectrum ZX personal computers. There are also a few dozen games for the Sega Mega Drive (Sega Genesis in North America), but most of the software on the service was for either arcades or PCs rather than consoles. There’s no shortage of excellent video games on AntStream, though you’ll have to dig through the endless lists to find what really calls to you. Don’t expect familiar Nintendo or Sega titles; even the Mega Drive games here lack recognizable classics like Sonic the Hedgehog and Streets of Rage. There are still loads of ’80s arcade bangers, from Bubble Bobble to Double Dragon to Metal Slug to Space Invaders. The familiar arcade games are balanced out by the computer game libraries, which include everything from strategy titles to text adventures. The multiple systems also mean there’s a lot of overlap between certain games; nearly every Dizzy adventure game on AntStream has individual versions for Amiga, C64, and Spectrum ZX.

Because the library is so big and the familiar games are relatively few (especially for North American gamers), you can bookmark titles you want to play as you browse. Select a game, then select the star next to the Play button. It’ll be added to your Favourites list (the spelling here is another indicator this service originated in England). Going to your Favourites list is slightly inconvenient, requiring you to select your user profile, then the Favourites tab rather than simply seeing your favorite games popular in a row on the home screen. It’s a minor annoyance, though, and the fact that the feature is there at all makes the gigantic games list more manageable.

I played a dozen or two games on AntStream across a few different genres. I tried shooters like E.D.F. and Saint Dragon, brawlers like Renegade and Bad Dudes Vs. Dragon Ninja, platformers like Joe & Mac and Rygar, and even a text adventure in The Very Great Big Cave Adventure. All games ran well, and controls mapped automatically to my controller or keyboard. For Gamers of a Certain Age

All streaming game services depend on taste, especially when the selections are so specialized. To get the most out of AntStream, you need a soft spot for ’80s-era arcade and non-PC (Amiga, C64, and Spectrum ZX, not DOS or Apple) computer games. This is a hard ask for modern gamers, or even millennials who grew up with the NES, SNES, and PlayStation. That said, AntStream is perhaps the ideal Gen X game service, and will satisfy the nostalgia needs of anyone who grew up with a big beige computer with a built-in keyboard. Its $10 monthly price is a bit high compared with other services, but it lets you access hundreds upon hundreds of titles you simply won’t find legally anywhere else. It’s definitely niche, but if it’s your niche it’s worth checking out.