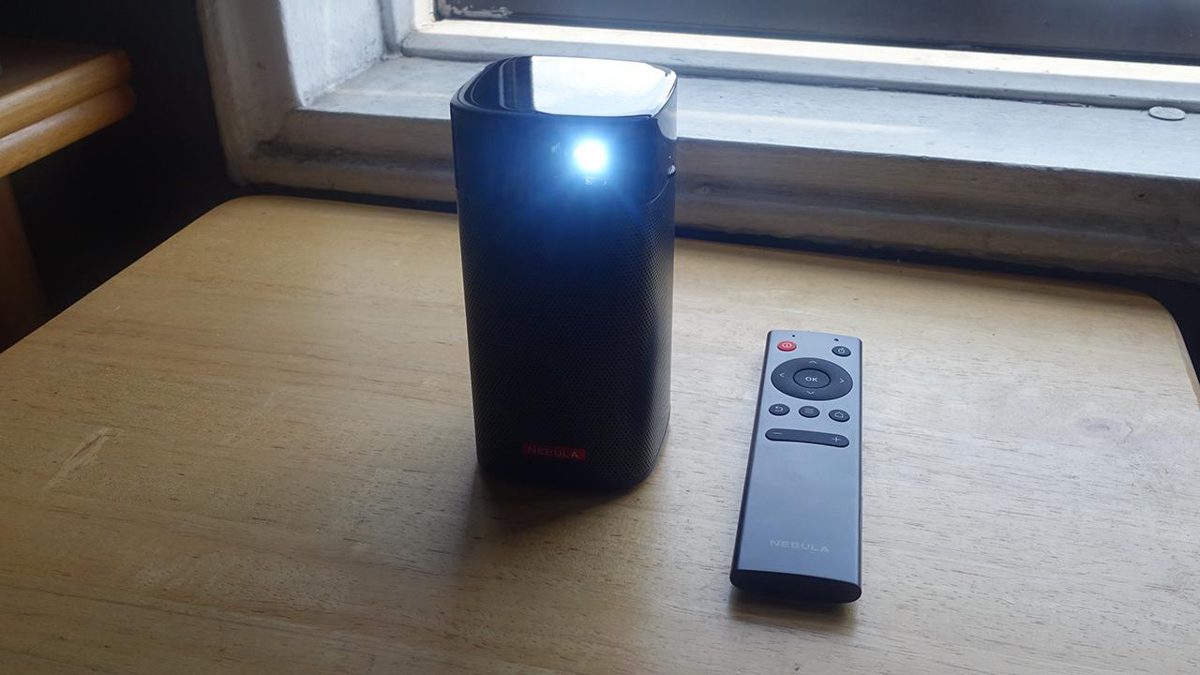 The Anker Nebula Apollo is among the smallest models in the company’s Nebula line of entertainment projectors, but it packs a lot of multimedia capability into its modest body. It can project images and video from external sources (stored on a USB thumb drive, or from internal memory), play music files, and even function as a Bluetooth speaker when paired with your smartphone or other mobile device. You can control the Apollo through its built-in control panel, an included remote, or from an iOS or Android device through the Nebula Connect app. Speaking of Android, the Apollo has that operating system built in, bringing the universe of Android apps to your projector screen. Its unusually long battery life between charges makes the Apollo a good choice as a portable projector, especially when you are away from an external power source and also need impactful audio.

A Speaker and a Projector in One

The Apollo uses a DLP-based light engine, employing an LED light source that has a rated lifetime of 30,000 hours. At 200 ANSI lumens, the Apollo is of modest brightness, matching the output of the Anker Nebula Capsule II and the Kodak Luma 350, the latter being our Editors’ Choice palmtop projector.

The Apollo’s 854-by-480-pixel (a.k.a. FWVGA or 480p) resolution is common among mini projectors—we saw it in both the Luma 350 and the AAXA P2-A Smart Pico Projector—though short of the 1,280-by-720, or 720p, resolution of the Nebula Capsule II. The Apollo packs a single 6-watt speaker, which can operate sound-only as a Bluetooth speaker when you are not projecting, as is true with the Nebula Capsule II’s 8-watt speaker. Several other projectors I currently have under review can also double as Bluetooth speakers.

I think of the Apollo, which measures 5.2 by 2.6 by 2.6 inches, as a “micro-tower” projector, with the bottom part holding the speaker and other components and the lens on top. In form it resembles the Anker Nebula Capsule II, but while the Capsule II is cylindrical—similar in shape to a large soda or beer can—the Apollo is more like a rectangular box, with rounded edges and corners, set on end.

This configuration gives the projector a few inches of throw height—as opposed to a palmtop model like the Kodak Luma 350, which rests on four tiny feet, barely an eighth of an inch tall. If that is not enough height, underneath the Apollo is a threaded hole that fits a tripod. 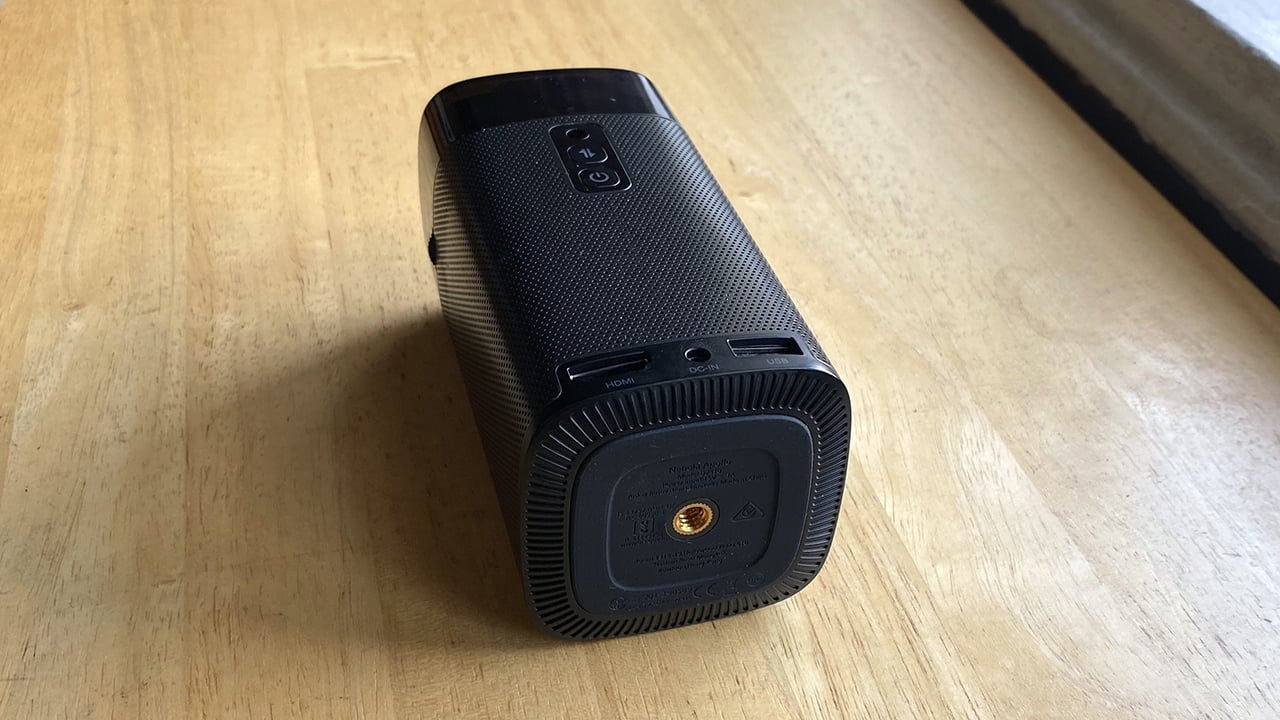 The lower part of the Apollo’s frame is clad in a matte-black wrapping pierced with tiny holes for a grille-like texture, while the top is a translucent, glossy black. Through the top, a Nebula logo is faintly visible, along with some (real or decorative) circuitry. 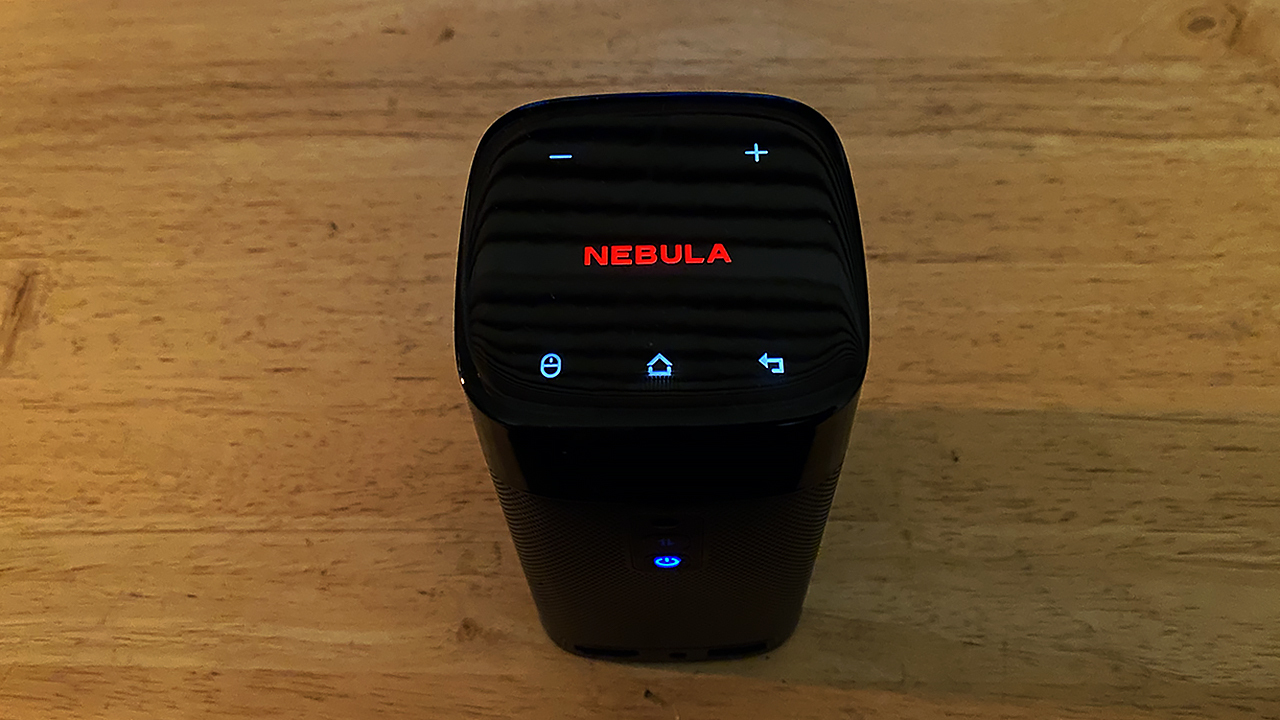 When the Apollo is turned on, the Nebula logo turns red, and five white virtual buttons flank it: home, return, mouse (cursor), plus, and minus (for volume control). The center of the top becomes a touch pad. If you don’t touch the panel for five seconds or so, the control buttons disappear, but you can rematerialize them simply by touching the top.

This built-in control panel has a set of controls similar to what’s on the included remote control, which eschews the touch pad and adds a five-way controller with a central button. Between the two, I preferred using the remote, because in navigating among menu choices with the touch pad, it was easy to overshoot my destination. Sometimes I had to try three or four times before I reached the item I actually wanted to click. 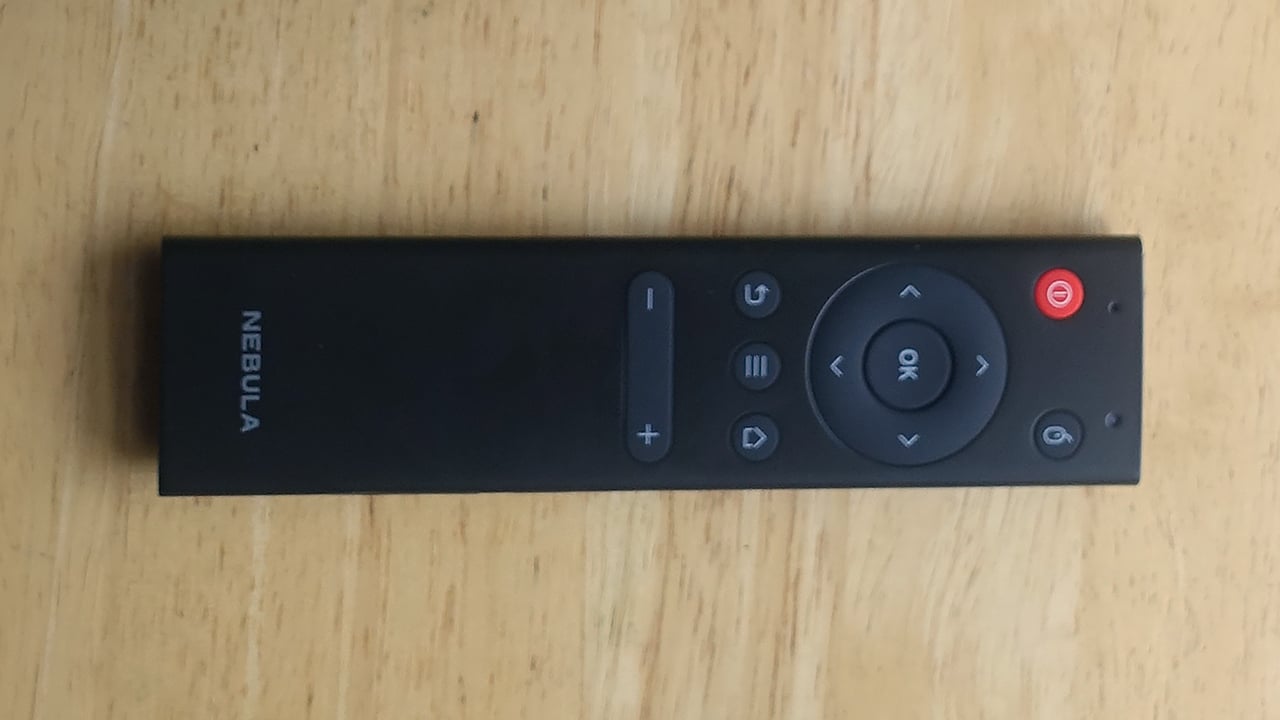 You can also control the Apollo through Anker’s Nebula Capture app. I had previously installed it on my iPhone while testing the Nebula Capsule II, and had only to select “Apollo” for it to sync with the projector. The app has a touch pad, plus home, return, and menu buttons, and a button that opens a virtual keypad.

On the left side of the Apollo, behind the lens, is a small focus wheel with which I was easily able to bring the image to a sharp focus. On the back are power and Bluetooth-connection buttons, as well as one HDMI and one USB Type-A port. (In the photo below, the Apollo is shown with a flash drive in the USB port; more on that in a bit.) 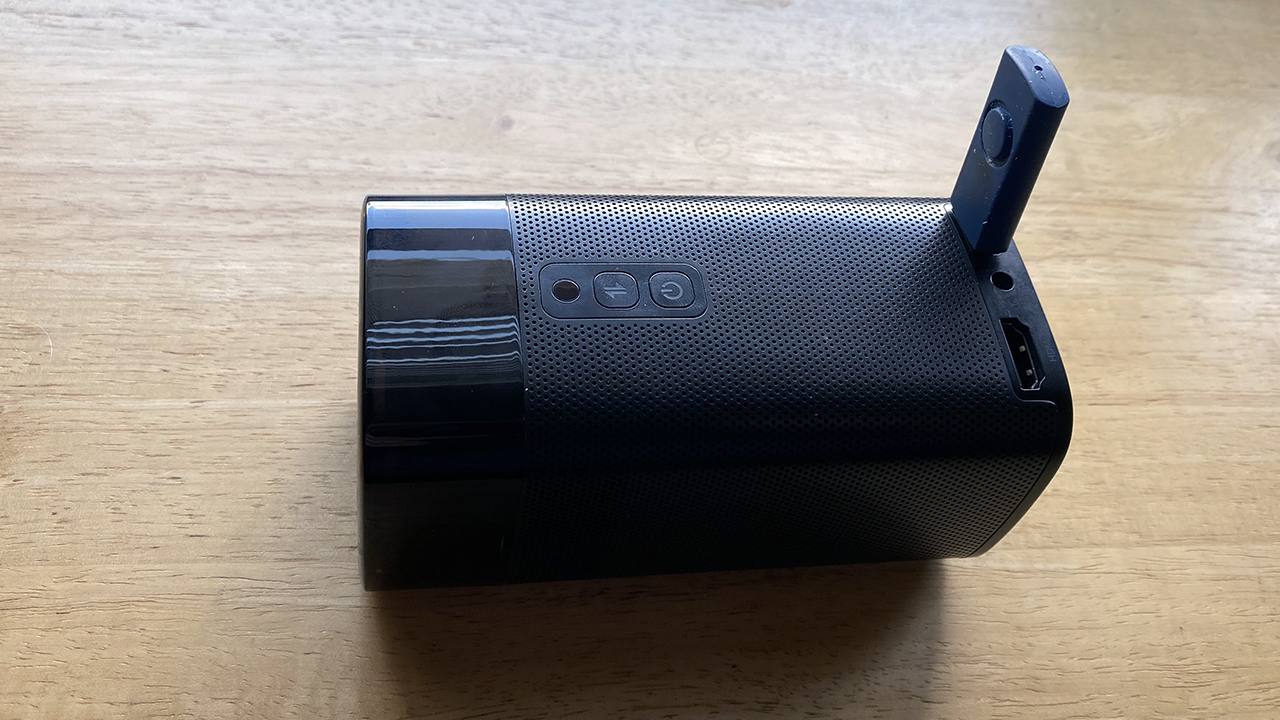 Also back here is a jack for the power adapter. Unlike the Capsule II, the Apollo lacks an audio-out jack, but it can connect to an external speaker via Bluetooth (as well as, as mentioned, serving as a Bluetooth speaker itself). It also features Wi-Fi connectivity.

Built into the Apollo is a rechargeable 9,750mAh battery, which, according to Anker, can last for up to 4 hours of video playback on a charge. In testing, it indeed delivered long battery life, making it ideal for portable use. The Nebula Capsule II, which is better suited as a home projector, is rated to last 2.5 hours.

This Projector Has Android Inside

The Apollo follows a trend we have been seeing in many recent mini-projectors (including the Anker Nebula Capsule II, the Kodak Luma 350, and the AAXA P2-A Smart Pico Projector) of incorporating Android. We have been seeing Android projectors for several years, but while some early efforts were barely functional, recent models tend to work quite well.

The Apollo runs Android 7.1, while the Nebula Capsule II runs the Android TV OS. Regardless of the Android flavor, the principle is the same: You can run preloaded Android apps and download new ones from the App Store over the Wi-Fi connection, as well as tweak a wealth of settings as you would on a smartphone.

When you turn on the projector, after a brief warmup period, the main menu, featuring at least two rows of colorful icons, fills the screen…

Those on the top row are labeled HDMI, File Manager, App Manager, Network, and Settings. From HDMI, you can connect to an external source if an HDMI cable is plugged into the projector. From File Manager, you can access content from a USB thumb drive or files saved to the projector’s 8GB of internal storage. App Manager opens a menu including File Manager, Media Player, WebView Browser (with a virtual keyboard for entering URLs), Aptoide TV (from which you can install some common video apps, such as TED), and AirPin Pro (for handling AirPlay or DLNA streaming). Network lets you connect to or switch between Wi-Fi networks for running Android apps or for screen sharing.

On the bottom row (which will extend to multiple rows when you install new apps) are icons for apps, starting with Amazon Video, YouTube, and Netflix, plus a link to the App Store. The apps are not quite preinstalled—for instance, I had to click on the YouTube button and then press Install. But apart from that simple process, there was no setup involved. (You will need to manually enter account passwords when appropriate.)

In testing the Apollo, I viewed a number of YouTube clips, both over Wi-Fi using the included Android YouTube app and from a Windows PC over an HDMI connection. I also looked at a series of clips stored on a USB thumb drive plugged into the back of the device, as pictured earlier. Likewise, I viewed many of our standard test photos stored on the USB key, and listened to music files saved to the drive.

In a dark room, I could view video at sizes up to 60 inches (measured diagonally) without appreciable degradation, with 48 inches an optimal balance between image size and quality. With the introduction of ambient light, the maximum usable image size shrunk to about 40 inches, with the ideal size closer to 30 inches.

Video quality was typical of an LED projector of modest brightness. Colors tended to look muted when the image size was too large, and there was a slight color imbalance in which reds looked dull and greens were a bit bright. Although I saw occasional rainbow artifacts, which often appear in the images from single-chip DLP projectors, the effect was modest enough that even someone sensitive to this so-called “rainbow effect” might not be distracted by them. (Click to see how we test projectors.)

Photo quality, meanwhile, was fine for viewing, for example, travel photos, with reasonably true colors and decent contrast. Sound quality from the 6-watt speaker was more than adequate for casual listening, whether from music or video files, or from music stored on my iPhone in Bluetooth Speaker mode. I occasionally noticed some mild distortion at higher volume levels, but the speaker is powerful enough that even at reduced volume, the sound should be enough to fill a small room. 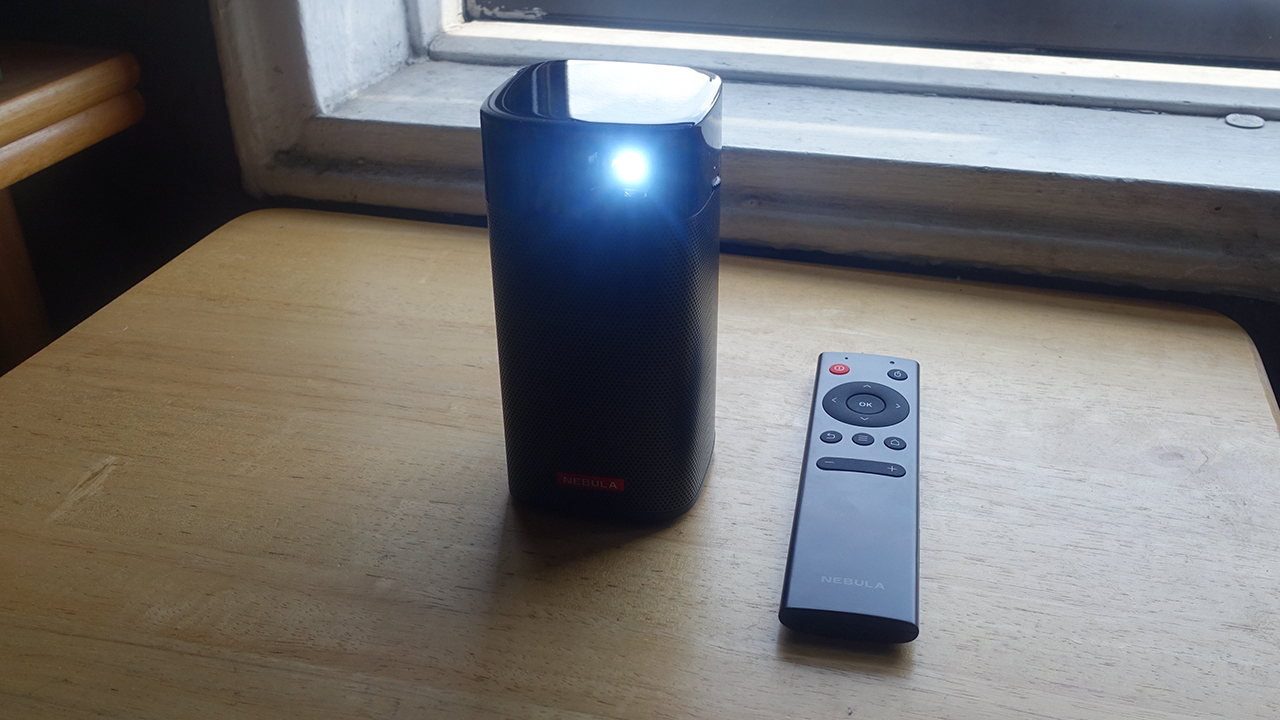 Thanks to its long-lasting battery, the Apollo is a better choice for portable use than the Capsule II. It is rated at 4 hours of video playtime, and it came close to that in my testing, while the Capsule II was only good for 2.5 hours. That said, the Capsule II has higher resolution (720p, to the Apollo’s 480p) and a louder speaker. But the Apollo comes in at a much lower price, and by virtue of its multiple connection choices and the ability to show a wide range of content, it becomes our latest PCMag Editors’ Choice pick among mini entertainment projectors.