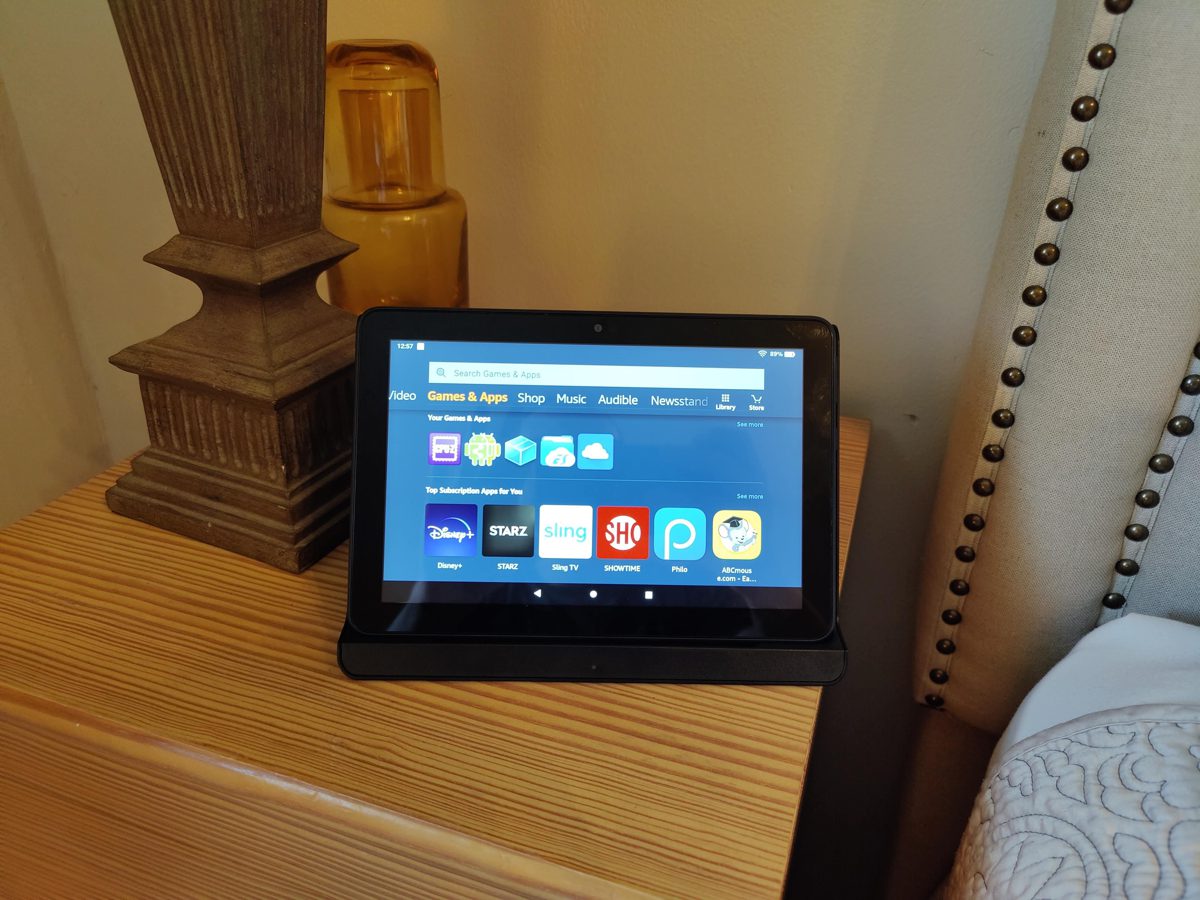 Amazon’s Fire tablet lineup has long been a favorite of ours as good, simple value for the money. Each uses a variant of the Android OS which is tilted heavily toward accessing Amazon services, but also good for streaming video and reading. The particularly important feature here is Show Mode, which makes the tablet act like a hands-free Echo Show smart display, displaying the time and responding to Alexa queries. The new Fire HD 8 Plus ($109.99 and up) is a gray Fire HD 8 tablet with more RAM, wireless charging, and a slightly higher-powered charger. That wireless charging, along with the optional charging dock, really make a difference here, turning the Fire HD 8 Plus into an Echo Show you can take with you. The audio isn’t nearly as good as a real Echo Show—you won’t use it to bop around to rich music in your living room—but that’s a fair trade-off for portability.

The Fire HD 8 Plus’s size, shape, design, screen, cameras, and Wi-Fi capabilities are all the same as the Fire HD 8’s. See our full Fire HD 8 review for more details.

I’ve never been a big fan of wireless charging, but here I get it. The HD 8 Plus works with a matching gray plastic dock ($30 if sold with the tablet, $40 alone) which can prop the tablet up in a comfortable horizontal or vertical position. The dock becomes a key part of the tablet’s life as a quasi-Echo Show, sitting on your kitchen counter or by your bedside to give you the news, show recipes, or control your smart home throughout the day.

The dock’s wireless charging abilities mean that you can quickly and easily pick up the tablet to take it with you as backseat entertainment, or toss it to a kid to use on the couch. Then you can pop it back in the dock without thinking, and as a result it’s almost always charged. This is an easier habit to form than remembering to plug your tablet in, and it’s a more aesthetically pleasing approach than just propping the tablet up on your kitchen counter and hoping for the best.

As such, the HD 8 Plus’s real competition is not the HD 8 tablet, but the Echo Show 8, which costs less ($99) and sounds much better, but isn’t portable. The Echo Show 8 is a real smart display/speaker; you’re not going to use it for reading or games, but it’s a much more pleasant way to listen to music while you cook. Personally, I’d go with the Echo Show 8 in my kitchen, but with the Fire HD 8 Plus as a portable smart home control tablet that I can take around the house.

Like the Fire HD 8, the Plus runs Amazon’s Fire OS, based on Android 9.1. This OS is designed almost entirely for consuming Amazon content. While Amazon has an app store, it lacks many of the apps found in Google’s Play store, and often has older versions of apps. If you install apps that aren’t from Amazon’s store, such as ones from the APKPure store, they don’t appear in the main UI and can be hard to launch.

There will always be some intrepid folks who say that doesn’t matter because you can hack the Google Play store onto the tablet. But that’s an unsupported use, which Google can and periodically does break, where some apps work and some don’t, and where you end up as part of a cat-and-mouse game between Amazon and Google. It isn’t a great user experience. Your best bet is sticking to Amazon’s app store.

In anecdotal testing, I could say that the UI appeared to be a little smoother than on the HD 8, but that might have been the placebo effect of knowing about the additional RAM. That said, it can’t hurt, especially if you’re using the tablet for gaming. But I wouldn’t consider it a deal-breaking feature the way stepping up from the Fire 7’s 1GB to the Fire 8’s 2GB of memory is.

Rarely does wireless charging make a difference in one of our reviews, but it does here. The Fire HD 8 Plus’s charging dock makes this tablet a much better bedside or kitchen companion than its lower-cost sibling—not only does it keep the tablet from sliding around, but you can pretty much pick up the device at any time and assume it will be charged. That’s really convenient.

The Fire HD 8 Plus’s major downside is the same as with the other Fire tablets: The software is devoted to making you consume Amazon content, and Amazon’s app store lacks many mainstream apps you can find in Google’s store. While you can hack Google’s store onto the tablet, it’s unsupported and may fail at any time, so I can’t recommend doing that.

Its $109.99 price is really $139.99 once you add the dock, but what Amazon offers here is enough for a lot of people—the Plus makes a great little Echo Show-alike to display recipes or act as a fancy alarm clock, plus play videos for the kids, for instance. If you need an inexpensive tablet with full Google Play app compatibility, check out Walmart’s Onn. 8-inch tablet instead.