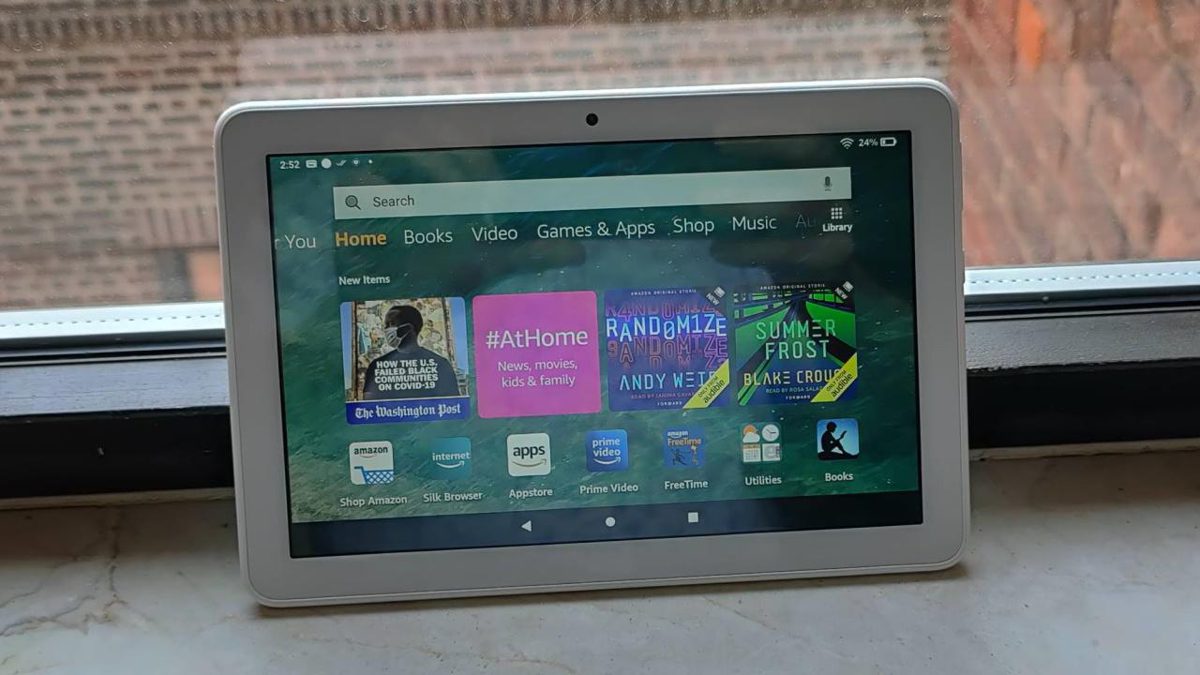 Amazon has sold its low-cost Fire tablet lineup for years now, and it isn’t shy about making it clear that it’s a way to enjoy Amazon content on the go, letting the company offer a quality product for a relatively low price. The latest Fire HD 8 ($89.99) is a cute, easy-to-use 8-inch tablet that works entirely within Amazon’s walled garden. For basic streaming video, picture books, kids’ games, and Zoom calls, it’s the best tablet value out there today, with a faster processor and more RAM than the 2018 model. But because Amazon restricts the Fire HD 8 to its own inadequate app store, you don’t get nearly the range of services you’ll find on other Android and Apple tablets.

The Fire HD 8 comes in black, blue, purple, or white. The base $89.99 model has 32GB of storage and ads on the lock screen; you can remove the ads for $15, or upgrade to 64GB of storage for $30. (All models have a microSD card slot for media storage that supports all current card capacities.) You can add wireless charging and more RAM, making the tablet a Fire HD 8 Plus, for an extra $20. There’s also a Kids’ Edition, with a rugged case, an extended warranty, and a FreeTime content subscription, for $139.

The tablet has a tough little plastic body, at 8.0 by 5.4 by 0.4 inches (HWD) and 12.5 ounces, with a decent, but not great, 1,280-by-800, 189ppi screen. This is the first generation of Amazon tablets to charge via USB-C, although that doesn’t necessarily mean speedy charging; it just means you can charge it with the cable for your recent Android phone.

With a Mediatek MT8168A chipset running at 2GHz and 2GB of RAM, the tablet turns in unimpressive benchmark performance. It got 4448 on the PCMark Work 2.0 benchmark and 101.32 on the Basemark Web browsing benchmark, both of which can be likened to a low-end smartphone.

Performance is a bit sluggish. The user interface is designed to work well on this tablet, but you can tell that scrolling complex pages gets a bit janky. It’s not at all an unusable experience, but it’s definitely a low-end one. Games are a mixed bag. An older action game, Asphalt 8, played smoothly, but another one, Riptide GP 2, dropped frames significantly. Kids’ games, such as the Toca Boca series, were OK.

Battery life is very good, at 9 hours, 25 minutes of video playback over Wi-Fi at maximum brightness, fulfilling Amazon’s promise of 12 hours with the brightness turned down a bit.

See How We Test Tablets

Amazon’s operating system is now based on Android 9, and I think it’s become less elegant with time. The basic concept has stayed the same: There are big text headers for books, video, games, music, and Amazon shopping, as well as a home screen that shows rows of content you might enjoy.

But that content has gotten a little chaotic, like a big, unorganized yard sale. On the home screen, you see Recent Apps followed by Continue (to continue content you’re reading), which makes sense, but then things get confusing with Read This Next (random book suggestions), Reading Included With Your Prime, News on COVID-19, Free TV on IMDB TV, TV Included With Your Prime, and only then Your Watchlist of content you’ve actually picked out.

On the app screen, you have Recommended for You, Top Subscription Apps for You, and Based on Your App Interests, and it isn’t clear how or why they’re different. It’s just too many perplexingly similar categories of stuff organized not by your own choices, but by what Amazon wants to push. 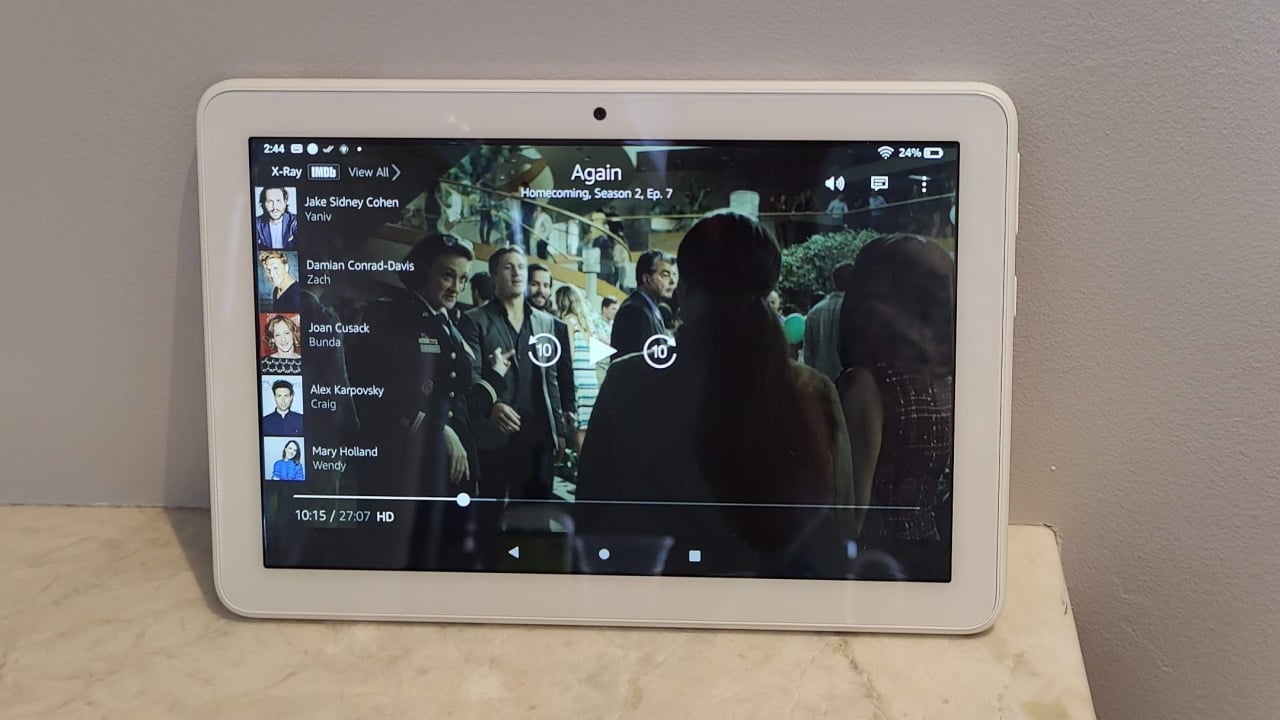 On the plus side, Amazon’s interface makes it easy to select and download Amazon Prime video. The tablet’s app store also offers Netflix, Hulu, Sling, Disney+, Philo, HBO GO and NOW, Starz, DC Universe, Showtime, and others. (CBS All Access, Apple TV+, and YouTube are missing.) You can also load your media onto a microSD card and use the VLC app to play it.

Amazon’s Freetime service locks the tablet into an age-appropriate content mode for kids under 12, with content from Disney, Nickelodeon, Sesame Workshop, and various popular toy-related video and book franchises.

The two speakers on the top of the Fire HD 8 are uncommonly rich and powerful for something this small. I wouldn’t use the tablet as a dedicated speaker, but it’s just fine for watching TV in bed or in the car, and the standard headphone jack and Bluetooth connection offer other listening options.

The tablet supports hands-free Alexa, turning it into a sort of Echo Show. You can ask Alexa to play music or videos, set timers, or walk you through recipes hands-free. That makes this a great little kitchen tablet. It costs $10 less than the Echo Show 8; the Show 8 has better sound, but you can’t throw it in your bag for the kids to use in the backseat.

The dual 2-megapixel cameras get basic video calling done, but that’s about it. Expect photos in any sort of low light to be dim and indistinct, and noise and frame rates to really drop in inadequate lighting. But that’s not a big deal for an $89 tablet. The most important takeaway is that with decent lighting, Zoom works fine, and that’s primarily what you should be using the camera here for. 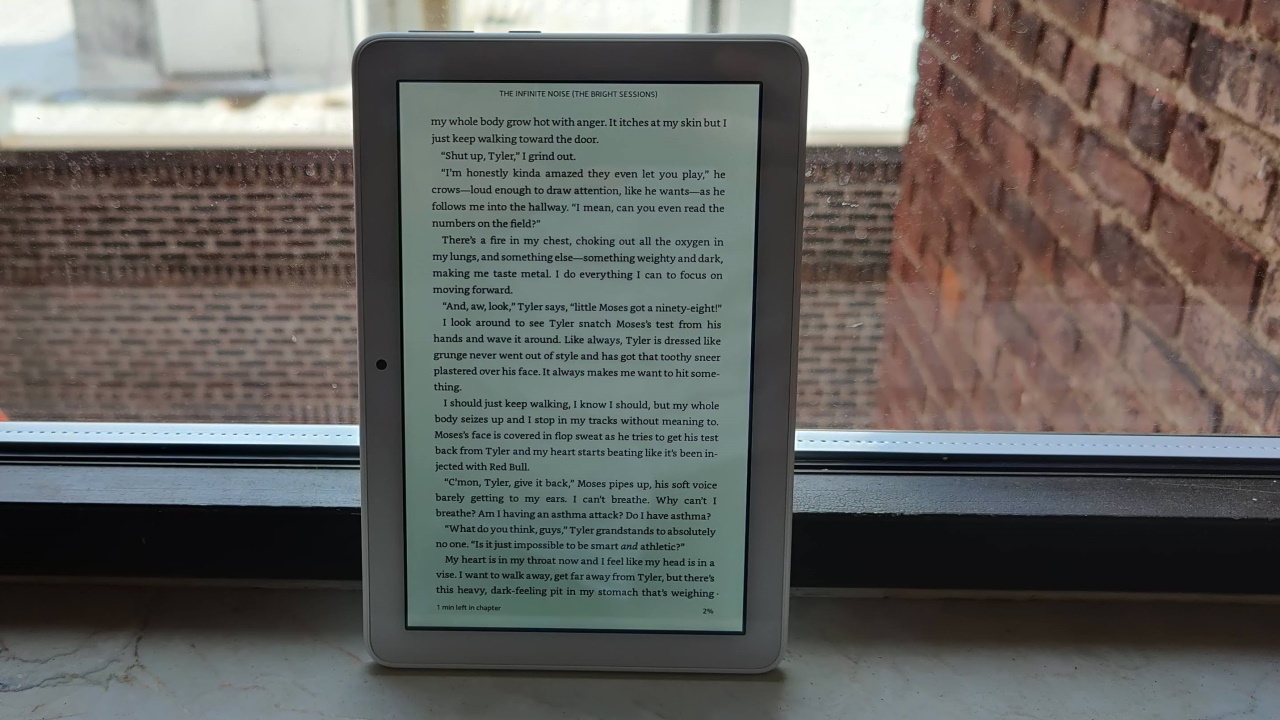 The Fire HD 8 is a fine ebook reader

One other reason you might be consider the Fire HD 8 is for a color ebook reader. I don’t love reading regular books on a tablet: The glowing LCDs don’t have the same restful vibe as an E Ink reader, and the batteries don’t last as long. But for children’s books, comics, magazines, and the like, you want something with color.

The 8-inch screen here works well for children’s books. Comics suffer a bit from the low resolution; while single pages work well, two-page spreads are hard to read. Manga work better because they rarely have spreads. Magazine pages read decently, although small type definitely suffers from the screen resolution. For a sharper view, you want to look for a tablet with 1,900-by-1,200 resolution, but they’re more expensive—the Samsung Galaxy Tab A 8.4, for instance, costs $264. 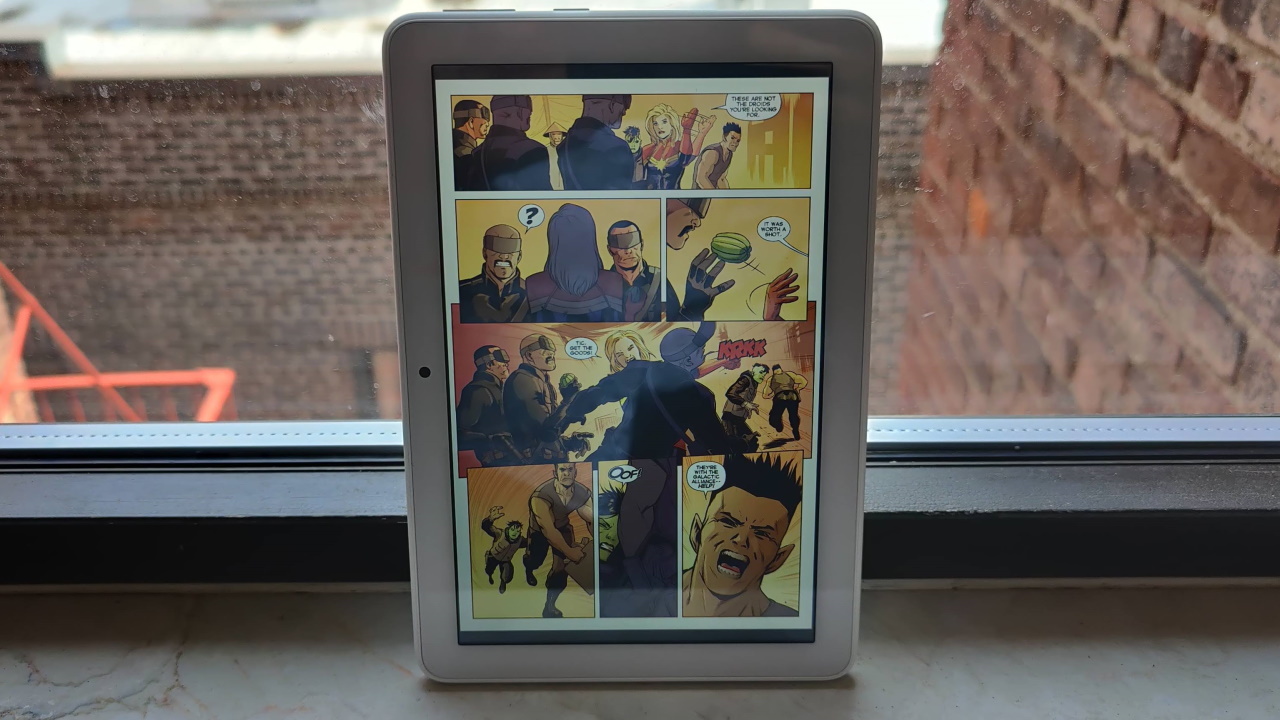 Comics are OK until you hit two-page spreads

The screen includes a blue light filtering option, so it can be more restful if you’re looking at content late in the evening.

The Fire HD 8’s biggest problem is how weak Amazon’s Appstore has become. The system UI prevents you from easily accessing apps purchased with any other store.

Apps are under a Games and Apps header on the home page. Tap on Your Games and Apps and you get an Appstore Library of everything you’ve ever downloaded from Amazon.

Amazon’s store lacks many apps that are in Google’s Play store or in other third-party stores like APKPure. Most importantly, there are no Google apps. There’s also no Microsoft Teams, for education and video chat use; no Kayak or Expedia for travel booking; no Stitcher or Pocket Casts for podcasts; no Marvel Comics or Marvel Unlimited; and more. It’s an impoverished app experience compared with any other Android device (and especially compared with an iPad). 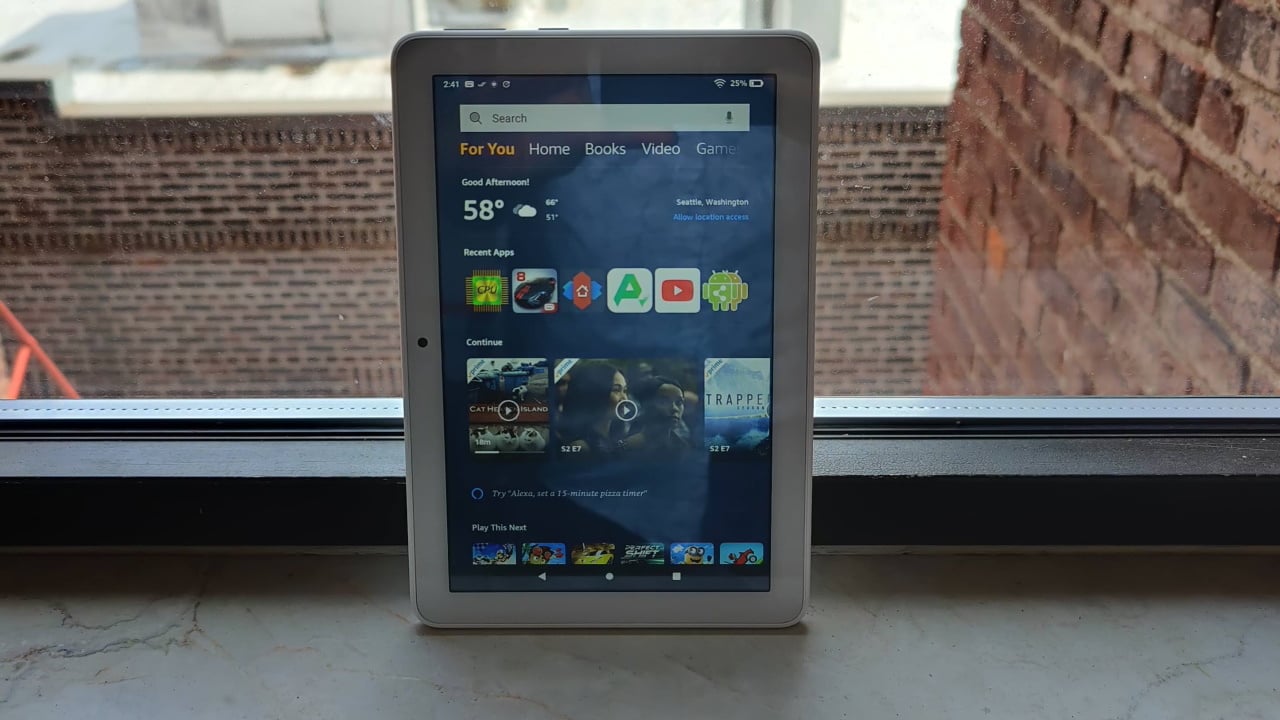 Amazon tries to fill the gaps left by Google services with its own multipurpose email, mapping, calendar, and contacts apps; they’re all slow but work fine.

You can sideload apps as APK files via USB or cloud services, or load the APKPure store onto the tablet. But unlike with previous versions of Amazon’s software, those apps don’t show up anywhere in the UI. You have to launch a third-party APK manager app to see and use the ones you’ve installed. And no, you can’t change Amazon’s default launcher so the apps show up.

It’s even worse with Google apps, because Google actively doesn’t want you using them on this tablet. Yes, you can hack Google Play services onto the Fire HD 8, but it’s liable to break at any moment.

Amazon’s app approach has gone backward with time. It used to be that you could sideload apps or other stores and see them on the overall app list. With its current UI, I can’t recommend this tablet for third-party app use beyond basic streaming video, e-reading, web browsing, kids’ games, and Zoom. Get used to using the web browser for other things. 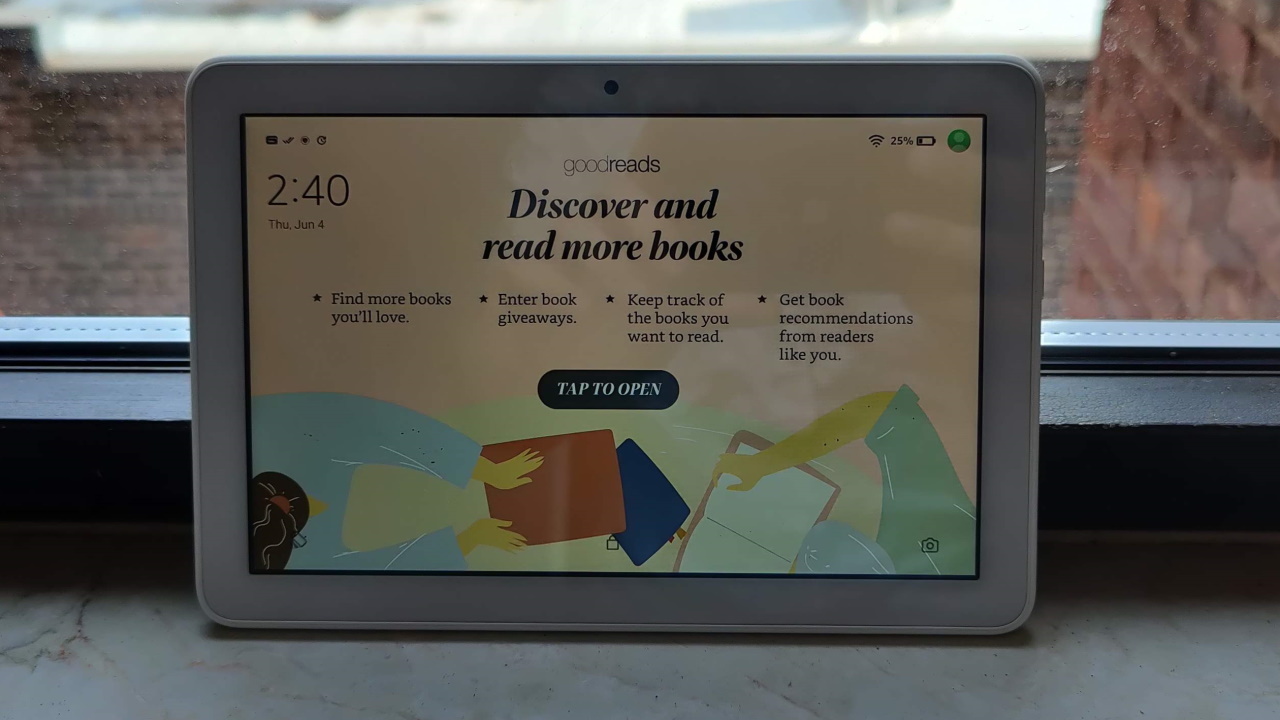 You can remove the built-in ads for $15

For years now, I’ve recommended Amazon’s Fire line as my favorite affordable tablets. The current Fire HD 8 continues that legacy. Don’t buy the 7-inch Fire, which has inadequate RAM; if you’re getting a small Amazon tablet, get this one. (There’s also the aforementioned Fire HD 8 Plus that adds more RAM and wireless charging, which we’ll review soon.)

But I feel like the value equation has wobbled as Amazon’s Appstore continues to lack important apps, and Amazon has made it harder to load apps from other sources.

That means you’re going to have to make the call based on what you want to use your cheap tablet for, and it isn’t as clear as it used to be. If you’re satisfied by Amazon’s content library, plus the streaming services supported here, go for the Fire HD 8. Otherwise you’ll sacrifice some battery life, but gain considerable flexibility with Walmart’s $64 Onn. 8-inch tablet, which has the standard Google Play store.