Alien Technology Was Likely Here – In Our Solar System? 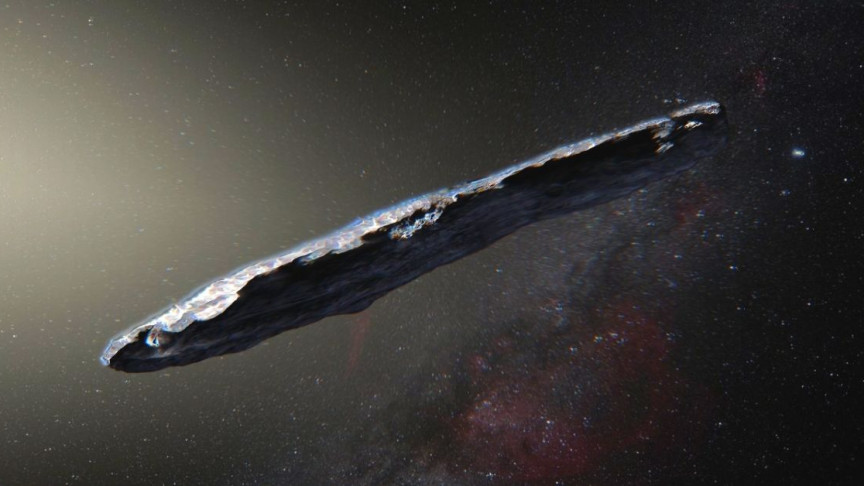 The search for intelligent life beyond Earth is a timeless one — symbolized in countless books and films. Most fictional depictions of close encounters involve a noble connection — a meeting of enlightened minds and cultures, with a peaceful exchange of technological prowess.

Scientific ideas like the Drake Equation — an attempt to formalize wider theoretical parameters of intelligent life beyond Earth — have yet to give a solid figure to the possibility of life in our galaxy. If intelligent aliens are real, they’ve yet to leave a sign.

However, one scientist of note says they just did.

When the unidentified object called ‘Oumuamua zipped through our solar system in 2017, it may have been our first official encounter with alien technology — so argues astrophysicist and Harvard Professor Avi Loeb in his book, titled “Extraterrestrial: The First Sign of Intelligent Life,” forthcoming on Jan. 26.

RELATED: FIGURING OUT WHETHER ALIENS EXIST: POSSIBLE RESOLUTIONS TO THE FERMI PARADOX

Alien technology may have entered our solar system

In his forthcoming book, Professor Loeb makes a compelling case for why the object called ‘Oumuamua (pronounced “oh moo ah moo ah”) — an elongated, shaft-like object that sling-shotted through our solar system in 2017 — was more than just another space rock.

‘Oumuamua, he says, was probably a piece of defunct alien technology.

The object came from the direction of the star Vega — a nearby star 25 light-years away — and crossed into the plane of our solar system on Sept. 6, 2017.

“It intercepted the orbital plane, within which all of the planets in our solar system revolve around the sun, on September 6, 2017,” wrote Loeb. “But the object’s extreme hyperbolic trajectory guaranteed it would only visit, not stay.”

After passing the perihelion, the closest position to the Sun of ‘Oumuamua’s trajectory, “it began to exit the solar system; its speed far away — relative to our star, it was moving at about 94,800 km per hour (58,900 miles per hour) — more than ensured its escape from the Sun’s gravity,” wrote Loeb in his book.

“It passed through Venus’ orbital distance from the sun around September 29 and through Earth’s around October 7, moving swiftly toward the constellation Pegasus and the blackness beyond,” Loeb wrote.

The object then displayed a small but consistent acceleration for which the sun’s gravity could not account.

Comets do the same as they release gases — which coalesce into their signature tails. But ‘Oumuamua didn’t have one, nor did telescopes we’d centered on the strange object find any signs of by-products typically linked to outgassing, like dust or water vapor.

Astronomers worked to exclude one theory after another, looking for ways to make sense of ‘Oumuamua’s bizarre motion. It hadn’t collided with another object, and it hadn’t received its boost in speed from solar wind.

One research group thought the best explanation for the object was that it was a “miniature comet” whose tail went undetected, as a consequence of “unusual chemical composition.” A different group suggested ‘Oumuamua consisted of frozen hydrogen — a modified mini-comet hypothesis.

However, the most interesting account came from Professor Loeb, who argued ‘Oumuamua wasn’t the kind of interstellar object we expected. To him, it was an artifact of an alien civilization.

“Long before we knew of its existence, the object was traveling toward us from the direction of Vega, a star just 25 light-years away,” wrote Loeb in his book.

However, ground- and space-based observations following the outward trajectory of the object identified sunlight reflecting off of the surface of ‘Oumuamua.

“For astrophysicists, an object’s changing brightness provides invaluable clues to its shape,” wrote Loeb. “In the case of ‘Oumuamua, the object’s brightness varied tenfold every eight hours, which we deduced to be the amount of time that it took to complete one full rotation.”

“This dramatic variability in its brightness told us ‘Oumuamua’s shape was extreme, or at least five to ten times longer than it was wide,” Loeb wrote. It seemed evidence pointed to a relatively small, cigar-shaped object.

“This is definitely an unusual object,” observed the narrator of a NASA video, The New Yorker reports. “And, unfortunately, no more new observations of ‘Oumuamua are possible because it’s already too dim and far away.”

Ruling out the possibility of a comet or an asteroid, Professor Loeb concluded only one explanation remained: the baffling object is an artifact of advanced technology from an alien civilization.

“Our civilization has sent five man-made objects into interstellar space: Voyager 1 and Voyager 2, Pioneer 10 and Pioneer 11, and New Horizons,” wrote Loeb. “This fact alone is suggestive of our unlimited potential to venture far out. So too is the behavior of our more distant ancestors.”

“And if other civilizations developed out there among the stars, wouldn’t they have felt that same urge to explore, to venture past familiar horizons in search of the new? Judging by human behavior, that would not be surprising in the least,” concluded Loeb in his upcoming book.

Needless to say, Loeb’s conclusion about the origin of ‘Oumuamua is extraordinary. “Extraordinary claims require extraordinary evidence,” said the astronomer Carl Sagan — who has yet to be dwarfed by another scientist in his efforts to promote the search for extraterrestrial life.

The best evidence Loeb cites for his ‘Oumuamua theory is the absence of convincing alternative explanations. “It is not obvious to me why extraordinary claims require extraordinary evidence,” wrote Loeb, flipping the script on Sagan: “Extraordinary conservatism keeps us extraordinarily ignorant.”

To Loeb, so long as the chance exists that ‘Oumuamua is an alien probe, after all, ruling out the possibility could make fools of us all. “If we acknowledge that ‘Oumuamua is plausibly of extraterrestrial-technology origin,” writes Loeb, “whole new vistas of exploration for evidence and discovery open before us.”

For standing by his convictions, Loeb risks (and has weathered) serious ridicule. On a historical basis, the odds are stacked against his theory. Yet considering the statistical likelihood of life beyond our home planet against the stark contrast of lacking evidence — known as the Fermi Paradox — it’s hard to resist the exciting possibilities that could unfold if we knew technology from an alien civilization did, in fact, enter our solar system.