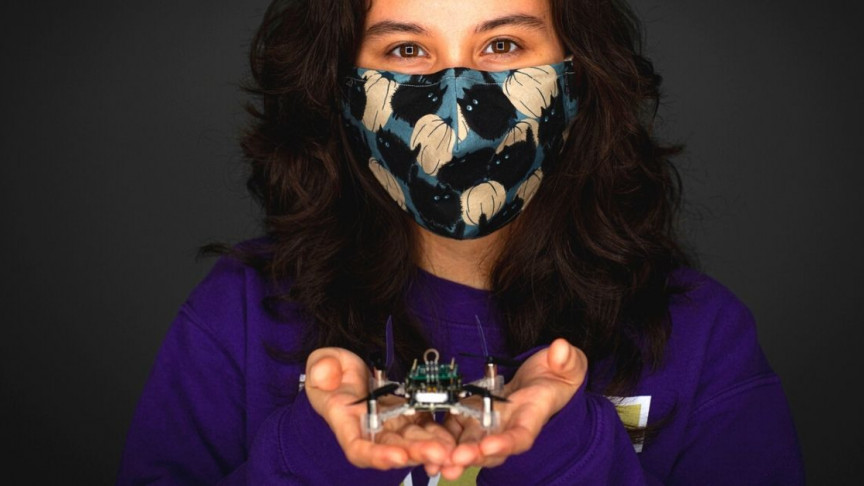 A team of scientists developed a new kind of “smelling” autonomous drone — dubbed the Smellicopter — according to a recent study published in the journal Bioinspiration & Biomimetics.

While it can already sense and avoid physical obstacles mid-flight, the biomimetic technology — which incorporates moth antennae — has incredible potential.

“I’m sure that the drone would be able to fly on Mars,” said Melanie Anderson, a doctoral student at the University of Washington, to Interesting Engineering. While it’s unclear how a moth antenna would react to the Martian atmosphere, “if it did survive, it could smell chemicals there too.”

RELATED: BIOMIMICRY: THIS SEARCH AND RESCUE DRONE CAN CHANGE SHAPES DURING FLIGHT

Smellicopter could ‘smell’ chemicals on Mars

While small in stature, these little robots are capable of going where people can’t — including dangerous and deadly areas, like an unstable structure, unexploded devices, or the apocalyptic aftermath of a natural disaster, according to a blog post on the University of Washington’s official website.

Researchers are rapidly pursuing the development of new devices capable of adeptly maneuvering through disparate situations — via the “smell” of chemicals in the air — to relay the location of disaster survivors, explosives, gas leaks, and more.

“We did design the Smellicopter so that it would be small and fit into small indoor spaces which are not usually accessible to large drones,” said Anderson to Interesting Engineering (IE). But provided components were swapped for ones suited for Mars, the Smellicopter could “smell” odors on the Red Planet.

However, most artificial sensors simply aren’t sensitive or fast enough to identify, process, and pursue specific smells or odor plumes while flying.

“Natural sensors are much better at detecting odors than portable artificial sensors,” said Melanie Anderson, a doctoral student in mechanical engineering at the University of Washington, told IE in an email exchange. “Moth antennae are small, lightweight, low-powered, and extremely sensitive compared to artificial sensors.”

“By using an actual moth antenna with Smellicopter, we’re able to get the best of both worlds: sensitivity of a biological organism on a robotic platform where we can control its motion,” added Anderson in the blog post.

Moths are anesthetized with fridge before antenna removal

Moths use their antennae to sense chemicals in the surrounding environment, and navigate in the direction of food or possible mates. “Cells in a moth antenna amplify chemical signals,” said Thomas Daniel, co-author of the study and professor of biology co-supervising Anderson’s doctoral research, according to the blog post.

“Our antennae come from a model moth species, the Manduca sexta, which is used for a lot of other research in our lab such as muscle mechanics and even learning,” added Anderson, to IE. Researchers put moths in a fridge to anesthetize them — before removing an antenna from their bodies.

Once separated from the live moth, the antenna remains active — both chemically and biologically — for up to four hours, according to the blog post. This time limit, however, could be extended via storing the antennae in a fridge.

Anderson and her team added tiny wires into either end of the antenna, successfully connecting it to an electrical circuit — enabling them to measure the average signal from all the antenna cells.

The team then compared this average signal to an artificial sensor, placing both on one end of a wind tunnel and letting smells waft down the channel of air — to which both sensors would respond. The scents consisted of a floral scent and ethanol, which is a type of alcohol.

“We based the Smellicopter’s search trajectory off of a nature-inspired research algorithm much like what a moth does to seek out odors.,” Anderson told IE. “When you smell odor and there is a slight breeze, you can almost always assume that the source of the odor is upwind from you since odor travels with the wind.”

Notably, the drone with the antenna reacted more rapidly, recovering between puffs with less lag time. “The algorithm, cast-and-surge, takes advantage of this fact so that when the Smellicopter smells odor, it flies upwind, and when it loses track of the odor, then it casts crosswind until it picks back up the odor trail,” explained Anderson to IE.

To complete the Smellicopter drone, the team added the antenna sensor to an open-source hand-held and commercially available quadcopter — a drone platform enabling users to tack on extra features.

“The Smellicopter drone base is the Crazyflie 2.1 from the company Bitcraze,” Anderson told IE. “Their open-source hardware and software have been a valuable resource to design and alter the drone platform to add our custom, fins, antenna sensor, and software for the search algorithm.”

Anderson’s team designed the algorithm Smellicopter uses to hunt odors, “cast and surge.” The drone can also avoid obstacles — employing four infrared sensors capable of measuring its surroundings roughly 10 times per second, according to the blog post. When an object comes to within roughly eight inches (20 cm) of the novel drone, it switches direction via moving to the next stage of its cast-and-surge programming.

Smellicopter could fly on Mars

Smellicopter doesn’t need GPS to navigate, according to the team. Instead, it employs a camera to evaluate its surroundings, kind of like how insects use their eyes.

“While the smellicopter as-is right now does not do too well in dusty environments,” additional components could be added “which can function well in other environments,” said Anderson to IE. Indeed, provided its copter blades provided lift in a thinner, dustier atmosphere, the Smellicopter could even fly on the Red Planet.

“I’m sure the drone would be able to fly on Mars,” Anderson told IE.

However, whether it could detect an odor plume on the Red Planet is up for debate. “I’m not sure how the antenna would react to the atmosphere, but if it did survive, it could smell chemicals there too,” Anderson added, to IE. This means, provided the antenna survived the interplanetary trip and atmospheric entry, biomimetic drones like Smellicopter might one day help search for organic compounds on Mars.

As of writing, the research team is collaborating with a different lab “to genetically engineer moth antennae so that they are sensitive to other chemicals, like bomb scents,” explained Anderson to IE.

Smellicopter to enter market, but moth collecting is DIY

“We aim to have antennae which are sensitive to other chemicals within a few years,” added Anderson. But regardless of its development stage, the open-source nature of Smellicopter has astounding potential in dangerous environments — from assisting amid emergencies to exploring new environments.

“We are working on getting the antenna sensor circuit produced and assembled outside of our lab so that we can share them with others,” noted Anderson, to IE. “After that, the Smellicopter can be bought assembled, and programmed at home!”

“The only hard part is getting the moths,” quipped Anderson.