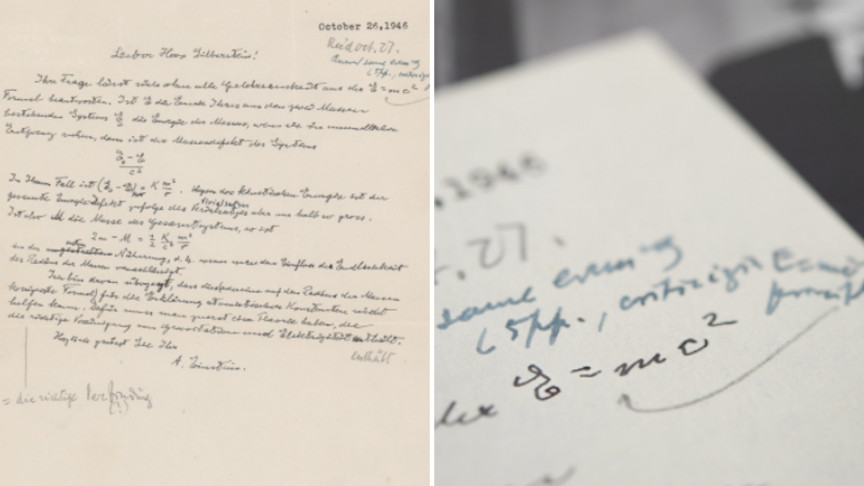 Imagine owning a letter with Albert Einstein’s handwriting. Now how about owning one with his famous E=mc2 equation? An anonymous document collector recently bought such a letter for just over $1.2 million from the Boston-based auction house, RR Auction.

Someone now owns a handwritten letter by Einstein with one of the world’s most famous equations.

The sale, which ended on Thursday, May 20, was expected to go for approximately $400,000, wrote RR Auction on its website, but it sold for over three times more. It goes to show how precious Einstein is to the world.

To further point out the letter’s preciousness, archivists at the Einstein Papers Project at Caltech, and the Hebrew University of Jerusalem explain that this is only the fourth known handwritten letter by Einstein that contains the E=mc2 equation.

The letter was written on October 26, 1946, on Princeton letterhead, and was a response to a query Dr. Ludwik Silberstein, a Polish-American physicist who was known for challenging Einstein’s theories, asked, as The Guardian reports. The world-famous equation was written on the very first line of the one-page 1946 letter.

The equation — energy equals mass times the speed of light squared — explains the interchangeability of energy and mass. It changed the world of physics by pointing out that time was not absolute.

Albert Einstein has gone down in time as one of the world’s geniuses. So much so, in fact, that thanks to updates in technology, you can now speak to a digitalized version of the man in question. Digital Einstein, as the tech is called, uses AI to create a pretty realistic synthesized voice of Einstein that answers your question in under three seconds — in near real-time.

Another one of Einstein’s letters made the headlines recently, when one of his long-lost letters written in 1949 was discovered. In it, Einstein discusses the senses of bees and birds and alludes to a “physical process which is not yet known.”

These three examples go to show just how revered Einstein is, and how his theories and equations are so highly regarded — to the tune of $1.2 million, it seems.