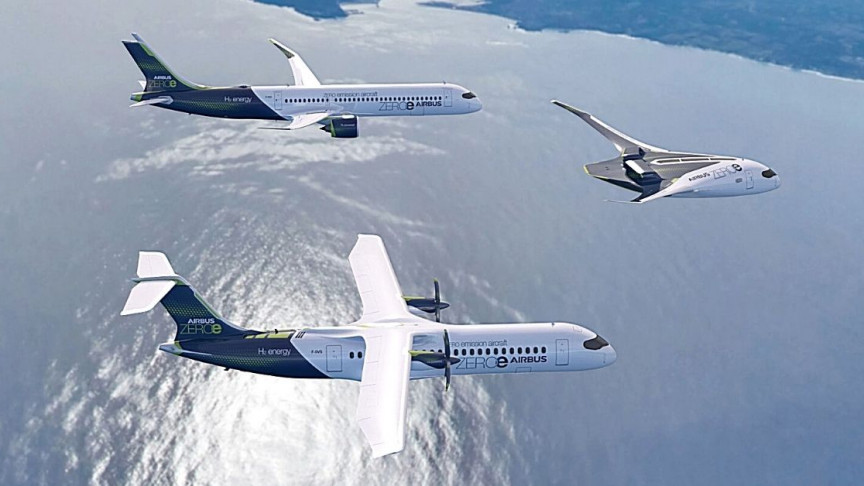 Airbus has debuted three new concepts for the world’s first “zero-emission” commercial aircraft — and one or some might enter service during or before 2035, according to a press release published on Airbus’ website.

Airbus debuted three new concepts for the first-ever “zero-emission” commercial aircraft and aims to press the future aircraft into service during or before 2035.

The three aircraft concepts will be tested to find the most efficient means of traveling long-distance via plane without producing greenhouse gases associated with the climate crisis, reports The Guardian.

If or when the zero-emission commercial aircraft goes into service, it will allow business and personal travelers to fly from London to Athens, the Canary Islands, or eastern Europe without producing harmful amounts of carbon emissions.

Airbus’ Chief Executive Guillaume Faury said the “historic moment for the commercial aviation sector” marks the “most important transition this industry has ever seen,” The Guardian reports.

“The concepts we unveil today offer the world a glimpse of our ambition to drive a bold vision for the future of zero-emission flight. I strongly believe that the use of hydrogen — both in synthetic fuels and as a primary power source for commercial aircraft — has the potential to significantly reduce aviation’s climate impact,” said Faury, in the press release.

All three of the aircraft concepts use hydrogen for fuel, which means the only emissions when burned is water vapor — making it a viably clean fuel alternative for heavy vehicles like trucks, trains, and planes.

The first concept from Airbus might carry from 120 to 200 passengers more than 2,000 nautical miles, propelled via a turbofan design that includes a modified gas-turbine engine fueled with hydrogen instead of jet fuel — which may be stored in tanks behind the rear pressure bulkhead of the plane.

The second concept calls for a turboprop design, and would use a modified gas engine and carry up to 100 passengers 1,000 nautical miles — for short-distance trips.

Airbus also aims to include a plane with an “exceptionally wide” body capable of blending the plane’s wings to create multiple options for the cabin layout, in addition to hydrogen storage options. This third concept could carry as many passengers as the turbofan design, and also match the range.

Faury also said keeping design options open would help the aircraft maker create a mature design, worthy of becoming “the world’s first climate-neutral, zero-emission commercial aircraft,” which could enter service during or before 2035.

Major investment in infrastructure is needed to make hydrogen planes a reality, he added, reports The Guardian.

Chief Technology Officer Grazia Vittadini of Airbus said the “very ambitious” development plan should yield early results on or before mid-2021 — with a final concept narrowed down by 2025. And while the company hasn’t ruled out manufacturing electric aircraft someday, she added, the aviation giant might roll this option out on a much smaller scale, with different models.

As the global climate crisis worsens — with wildfires in California and super-hurricanes in the Gulf of Mexico — the shift from traditional fossil fuel gas to hydrogen might help reduce the carbon footprint of transportation industries. The appeal of low-carbon, zero-emission alternatives may transform present-day gas infrastructures and help us pursue a more sustainable standard.