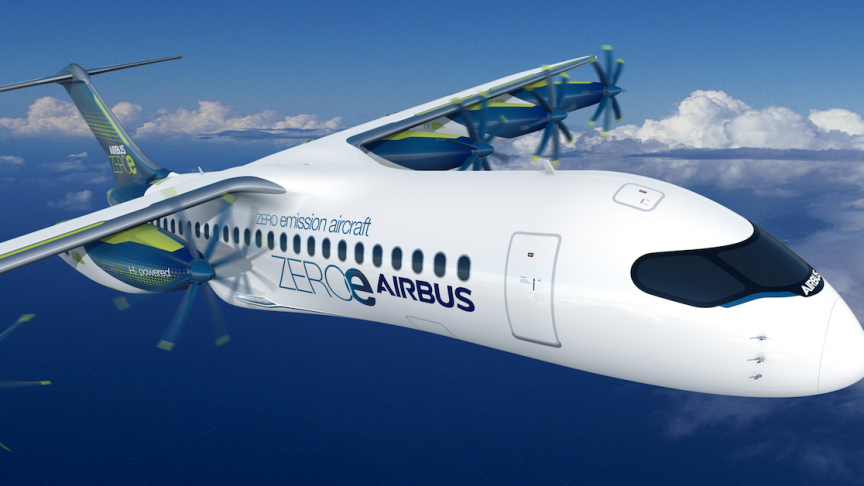 The new zero-emission aircraft could include a propellor-driven plan “unlike anything seen on today’s runways,” Airbus explained in a press release.

In September, we reported on Airbus’ announcement that it will develop a commercial hydrogen-fueled airliner by 2035.

As part of that announcement, Airbus released three concepts for their hydrogen aircraft: a propellor-driven short-haul aircraft, a short-to-medium-haul airliner, and a ‘blended-wing’ aircraft.

The company said it will decide on one of these designs by 2025, so as to focus its research and development team on one cohesive project.

Last week, Airbus’ engineers revealed more details about the propellor concept: the aircraft, if chosen, will be powered by three ‘pods’ on each wing.

As well as housing the aircraft’s propellers, each of these pods would contain all of the liquid hydrogen fuel necessary, electric motors, fuel cells, power electronics, and a cooling system.

The ‘pod’ configuration also includes removable fixtures which, according to Airbus, allows for these to be disassembled and reassembled in record time.

This potentially means that pods filled with fuel could be waiting for the aircraft after landing and quickly attached to allow it to go back on its way.

“It is unlike anything seen on today’s runways: the “pod” configuration—one of several being conceptualized as part of ongoing R&D on the ZEROe concept aircraft—features a series of stand-alone propulsion systems based on hydrogen fuel cell technology,” the Airbus press release explains.

“Today, Airbus is conducting studies to determine how scalable the “pod” configuration, among others, could be to large commercial aircraft.”

Glenn Llewellyn, VP of zero-emission aircraft at Airbus, emphasized in the statement, that “this is one option, but many more will be conceptualized before we make a final selection, a decision that is expected by 2025.”

However, the “‘pod’ configuration is a great starting point to nurture further inquiry into how we can scale up hydrogen technology to commercial aircraft,” he continued.

As hydrogen fuel has the potential to be zero-emission — if it is produced using clean energy and electrolysis instead of natural gas — this new design aligns with the European Commission’s recent announcement that it wants a zero-emission plane to be in service by 2035.