AI Deepfakes and the Future of Truth 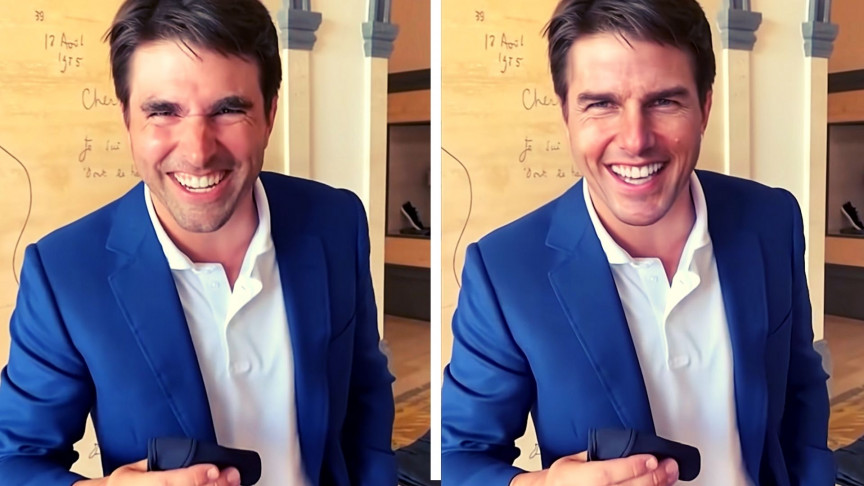 When several life-like Tom Cruise deepfakes went viral on TikTok, many saw the future of truth through a glass, darkly — out of concern for a world where acquiring deepfakes of major celebrities or political figures would become a “one-click” feature of daily life.

Like it or not, we live in a world where anyone can interact with deepfake technology. But curating high-end specialized AI drivers — whether for mischief or raising awareness — is harder than it looks.

Deepfake accounts can gain massive followings in a short period

The creator of the video — a Belgium VFX specialist named Chris Ume — thinks this is unlikely, emphasizing the impractically long timespans and substantial effort required to build every deepfake, in addition to finding an ace Tom Cruise impersonator (Miles Fisher).

“You can’t do it by just pressing a button,” said Ume in a report from The Verge. “That’s important, that’s a message I want to tell people.” Every clip from the Tom Cruise deepfake took weeks of work, employing the open-source DeepFaceLab algorithm and other, more conventional video editing tools. “By combining CGI and VFX with deepfakes, it makes it better. I make sure you don’t see any of the glitches.”

Ume has worked with deepfakes for years. He created the effects for the “Sassy Justice” series from “South Park” creators Trey Parker and Matt Stone. He began working on the Cruise deepfake when he came across Fisher’s earlier Cruise deepfake video declaring the actor’s (fake) intentions to run for president.

The two then began a collaboration on a concession speech from Cruise, and eventually decided to go with TikTok for their next great experiment. It didn’t take long for their @deeptomcruise account to amass tens of thousands of followers and likes — a testament to how rapidly a social platform can uplift even an earnestly fictitious project. While Ume temporarily removed the videos, he later reposted them.

Of the account and its deepfake activities, Ume said: “It’s fulfilled its purpose,” according to The Verge report. “We had fun. I created awareness. I showed my skills. We made people smile. And that’s it, the project is done.” While this fell well within TikTok’s rules for parody uses of deepfakes, the real Tom Cruise soon opened his own official account on the platform — possibly only after becoming aware of his deepfake presence.

Deepfakes aren’t exactly new, but the results are becoming more realistic and “life-like” with each passing day. Weeks ago, MyHeritage added a new AI tool to its website capable of reanimating photos of deceased relatives into unnerving videos.

“Each driver is a video consisting of a fixed sequence of movements and gestures,” read an FAQ explainer on MyHeritage’s website. “Deep Nostalgia can very accurately apply the drivers to a face in your still photo, creating a short video […] so you can see your ancestors smile, blink, and turn their heads.”

Deepfakes can alter the ‘truth’ for better and worse

There is much room for abuse of this technology in politics, but so far the social damage from deepfakes has remained largely benign — save for a collection of “revenge ,” or pornographic visuals of women without their consent. Paradoxically, the realness of deepfakes has little bearing on the damage wrought online — which is heavy, and could lead to serious exploitation.

For example, someone in possession of harmless facial images — pornographic or not — might threaten or blackmail the real face’s owner. Ruining lives and livelihoods could even be as easy as creating gossip about the existence of controversial content.

However imperiled deepfakes might one day make the idea of “true” images and content, the future of the nascent truth-twisting technology is already firmly rooted in the entertainment industry.

We’ve already seen major franchises like Disney’s Star Wars recreate the late Peter Cushing’s face for a reprise of his pivotal portrayal of Grand Moff Tarkin, in addition to another (albeit less convincing) Carrie Fisher deepfake, for the same franchise’s Princess Leia. But whether the AI technology becomes the bane of social existence, a mainstream alternative to developing new Hollywood talent, or both — the deepfake genie is definitely out of the bottle.