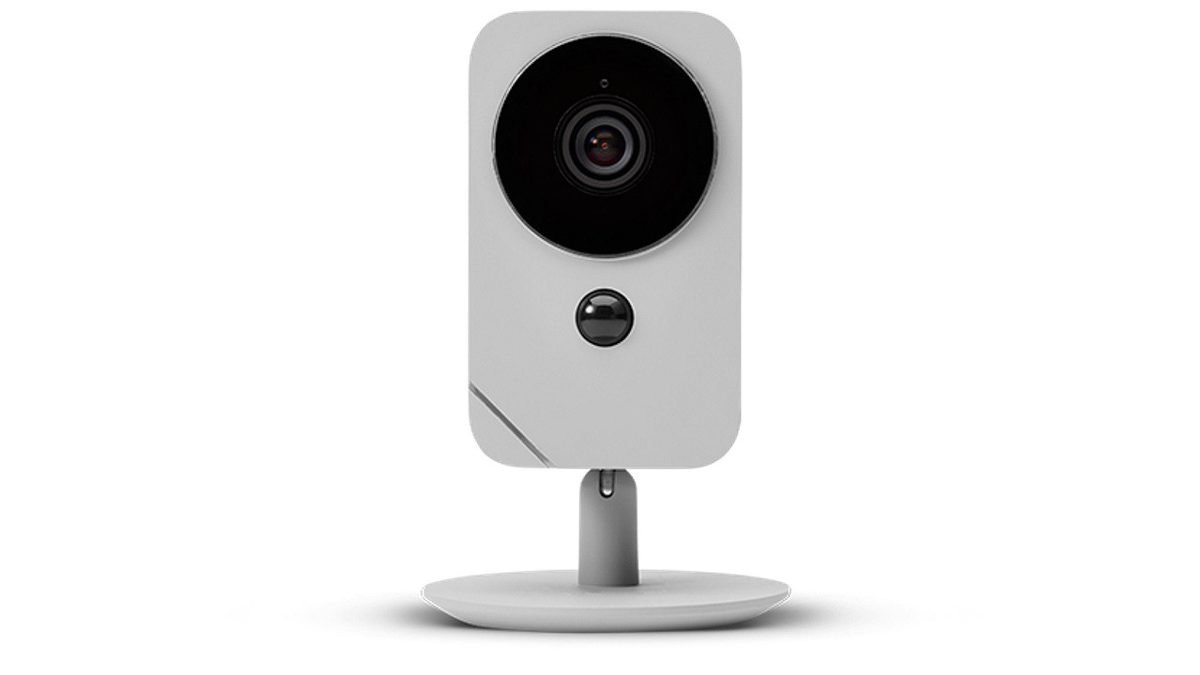 The Blue Indoor Camera ($199.99) is one of three new security cameras offered by ADT that marks the security company’s entry into the DIY home security arena. It’s a 1080p camera that has its own Wi-Fi radio and offers motion detection, face recognition, and support for third-party devices and Amazon Alexa voice commands. It delivered sharp HD video and accurate motion detection and played well with other smart devices in testing. But face recognition performance was spotty and the camera lacks a few of the features that you get with our more affordable Editors’ Choice, the $130 SimCam 1S.

The Blue Indoor Camera measures 4.3 by 2.6 by 1.8 inches (HWD) and sits atop a round base that can be used as a desktop stand or mounted on a ceiling or wall using the included hardware. The stand uses a mounting arm that lets you tilt the camera forward and backward. The camera body has a pearl gray finish and sports a diagonal status LED strip on the right front corner and an LED status ring around the camera head. The LEDs are solid blue when the camera is starting up, blink blue during setup, blink green when attempting to connect to Wi-Fi, and are solid red when the camera is in privacy mode. Around back are a power jack and a reset button, and up top are two microphones and a mute button. The lower edge of the camera holds a speaker and the right side contains a microSD card slot.

It captures 1080p video at 24fps and has a 130-degree field of view. It uses two infrared LEDs to provide up to 16 feet of black-and-white night vision and has a PIR (passive infrared sensor) motion sensor with a 16-foot range. Connectivity comes by way of an embedded 2.4GHz Wi-Fi radio, which means you don’t need a hub. If you plan to install the camera in a place with a weak Wi-Fi signal, you can pick up the Blue Extender & Chime for $49.99. Simply plug it into any wall outlet to extend your camera’s Wi-Fi range.

The camera can be added to any ADT security system or used independently with the Blue by ADT mobile app (for Android and iOS). It supports IFTTT applets that allow it to work with other compatible devices, and it supports Amazon Alexa routines that allow you to trigger other Alexa-compatible smart home devices such as Philips Hue lights. You can also have Alexa make an announcement when motion is detected, but you can’t stream video from the camera on an Echo Show device like the Ring Indoor Cam can, nor does the camera currently work with Apple HomeKit or Google Assistant. According to ADT, HomeKit and Google Assistant support are on the roadmap.

The Blue Indoor offers motion detection, face recognition, and two-way audio. It’ll send push and email alerts when motion is detected, but lacks the smart alerts that you get with the SimCam 1S that tell you if the alert was caused by a person, animal, or car. The camera will record a 30-second video of the motion event and comes with free cloud storage for the past 24 hours, or you can pay $2.99 per month for 60 days of storage. Alternately, you can pop in a microSD card (not included) and store your video locally.

The Blue by ADT mobile app lets you add new cameras, view live and recorded video, create user profiles for face recognition, configure motion settings, and more. It opens to a home screen that displays the local weather up top, above panels with thumbnails for each installed camera. Tap any thumbnail to launch a live stream that can be viewed in full-screen mode by turning your phone sideways. Along the bottom of the screen are buttons for taking a snapshot, manually recording a video clip, activating two-way talk, and muting the speaker. Tap the two arrows in the upper right corner to return to the home screen.

Below the camera panels are thumbnails of recently recorded event video and a button that takes you to a screen with thumbnails for all recorded video. Tap any thumbnail to view the video, download it to your phone, or delete it. At the very bottom of the home screen is a Crime Watch map that displays recent criminal events in your area including assault, robbery, theft, and other crimes. Each crime has its own marker on the map—tap the marker to see what type of crime occurred and what street it occurred on.

I had the Blue Indoor Camera up and running in minutes. After powering up the camera, I downloaded the app, created an account, verified my email address, and supplied an answer to a security question. I tapped Get Started, entered my home address, and selected Cameras Only from the setup screen. When I selected the Indoor Camera, the app informed me that setup time would be an estimated 15 minutes, which turned out to be overestimated by at least 10 minutes.

I gave the camera a name and entered my network SSID. This generated a QR code on my phone that I held in front of the camera. After a few seconds the camera chimed, indicating a successful scan, and the device was connected. I waited another three minutes or so for a firmware update and the installation was complete. The entire process took about five minutes.

Face recognition didn’t work as well. The camera was unable to identify my face from a distance of over six feet, and even when I was close to the camera it would categorize me as unrecognized every so often. I experienced this with the Tend Secure Lynx camera as well. The SimCam 1S, on the other hand, provided much more accurate face recognition in testing.

The ADT Blue Indoor Camera is a good choice for anyone who uses an ADT or Lifeshield security system to monitor their home, but it also works on its own to help you keep track of who is coming and going. The camera is easy to install and delivers sharp, colorful video, and it works nicely with Alexa routines and IFTTT applets. For more accurate face recognition, however, check out our Editors’ Choice for indoor security cameras, the SimCam 1S. It’s around $70 less than the Blue Indoor Camera and offers more features including dual-band Wi-Fi, an included SD card for local storage, mechanical panning, and intelligent alerts.