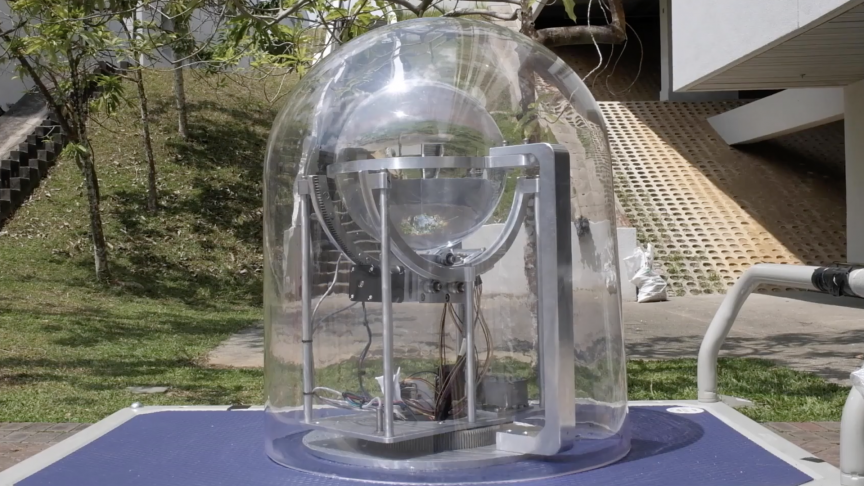 Redirecting sunlight into dark spaces is a method that has been used by companies and inventors for years to benefit society — in recent years, for example, the Liter of Light project has used a daylight system to light poor households.

However, rerouting sunlight over long distances is a harder task that often requires large curved mirrors and heavy-duty motors.

In a bid to build a simpler but effective method, scientists at Singapore’s Nanyang Technological University (NTU) attached the end of a plastic optical fiber to a commercially available clear acrylic ball. Their new device is described in a paper published in the journal Solar Energy.

When their ball is in direct sunlight, it focuses the incoming rays of light onto the optical fiber, which can then be carried to a dark space in order to give it light.

The researchers devised the idea when thinking up a solution for lighting Singapore’s future underground constructions. The space-starved island state has little room for expansion, leading its government to plan extensive underground infrastructure in the coming years.

The NTU researchers developed a daylight harvesting ball that adapts to sunlight in a similar fashion to a sunflower. In order to adapt the location of the optical fiber throughout the day, the researchers inserted a GPS and clock-enabled chip into the ball, which is made out of transparent polycarbonate.

Using this method, the researchers ensured that the fiber is always at the back of the ball and is not blocking any sunlight.

The researchers tested their device in a pitch-black room and found that it exceeded the luminous efficacy of an off-the-shelf bulb. It also provided light output similar to that of a larger and more expensive conventional solar concentrator.

“Due to space constraints in densely populated cities, we have intentionally designed the daylight harvesting system to be lightweight and compact,” lead scientist, Asst. Prof. Yoo Seongwoo explained in a press statement.

“This would make it convenient for our device to be incorporated into existing infrastructure in the urban environment,” Seongwoo continued.

The researchers say that a commercial version of the technology could incorporate a pole-mounted ball as well as an LED bulb beside the light-emitting end of the fiber, which would switch on automatically as the sun goes down.