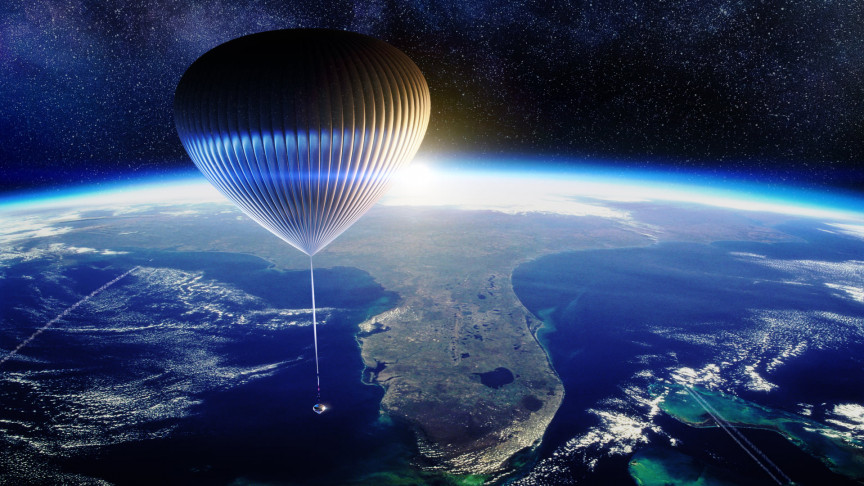 Space travel is no longer a dream, because, now, for $125,000, anyone can book a ticket to space. This eye-catching deal is being offered by Space Perspective, a space tourism company that has created a balloon-driven space capsule called Neptune One, for conducting commercial space flights. Neptune conducted its first test flight in June 2021, and from the same month, Space Perspective has also started accepting seat bookings for spaceflights in the years 2024, 2025, and beyond.

During its proposed space flights, Neptune plans to carry passengers 100,000 feet (about 30 km or 18.64 miles) up in the sky. However, according to the Fédération Aéronautique Internationale (FAI), outer space actually starts at a height of 330,000 feet (100 km or 62 miles) from the Earth. So technically, the passengers aboard Neptune One would only be referred to as space tourists (just like Richard Branson and Jeff Bezos), and not as astronauts.

An overview of Space Perspective’s Neptune One spaceship

The Neptune One spaceship is divided into three main parts; a large (about 326 ft-100 meters in diameter) flying space balloon that runs on the same technology used by NASA in its stratospheric balloons, a pressurized space capsule allowing passengers to have a 360-degree panoramic view of the space from the inside, and a descent system with a reserve backup parachute for safe landing the of the spaceship in case of an emergency.

Space agencies and companies around the globe have already been using space balloons to carry telescopes, robots, and other research-related equipment to space. Neptune’s advanced space balloon is designed to carry the passenger capsule in space using hydrogen gas (traditional, earth-bound balloons use helium). Unlike the heavy space rockets used by big aerospace companies like SpaceX, Virgin Galactic, and Blue Origin, Neptune One’s space balloon is lightweight and does not cause any harmful emissions.

During each flight, the pressurized capsule hanging below the space balloon will be carrying nine space travelers (one pilot and eight passengers) for a total of six hours, out of which passengers will spend two hours at the 100,000 feet height (30 km or 18.64 miles).

The company website also mentions that apart from the passenger seats, the Neptune capsule will also feature a refreshments bar, communication devices, non-glare windows, personal cabinets, Wi-Fi, a bathroom, and all other necessary amenities that space tourists may require during their flight.

Jane Poynter, Co-CEO of Space Perspective told CNN that their company is committed to transforming people’s perspectives with regard to both Earth and space, saying, “We’re committed to fundamentally changing the way people have access to space — both to perform much-needed research to benefit life on Earth and to affect how we view and connect with our planet.

Where does Space Perspective’s Neptune stand against other players?

Despite the strong presence of companies like SpaceX, Virgin Galactic, and Blue Origin, looks like Space Perspective has managed to stand out in the field of space tourism. All the seats and slots for Neptune One’s spaceflights set to launch in early 2024 are booked. Space Perspective is getting a really good response for its proposed space operations, the company has sold out a total of 450 seats so far and is now accepting reservations only for 2025.

On the other side, both Richard Branson and Jeff Bezos, who have already traveled to space once themselves, are yet to announce the dates for their fully commercial spaceflights. Elon Musk may be somewhat ahead of them in the race, as recently SpaceX Inspiration4 completed a successful three-day all civilian space mission. During the flight, the SpaceX Inspiration4 spacecraft went about 363.5 miles (585 km) up in space, this is the farthest distance a human spaceflight mission has gone since the Apollo space program.

Still, when it comes to the ticket prices, Space Perspective appears to be the most cost-efficient, sub-orbital space travel offering with its charge of just $125,000 per passenger. Whereas Virgin Galactic has recently announced that one seat on their VSS Unity space rocket would cost $450,000. What’s more surprising is that the four passengers aboard SpaceX Inspiration 4 are said to have paid $55 million each for their fancy space trip.

Although, Blue Origin has not yet declared ticket rates for customers who look forward to traveling to space in its New Shepard space launch vehicle. The company has previously sold a seat for $28 million on its first crew flight that was launched in July 2021 (the anonymous bidder later backed off and the seat was given to Dutch teenager Oliver Daeman instead — Daeman’s father, the founder of private equity firm Somerset Capital Partners, paid an undisclosed amount for the seat).

However, as compared to the six-hour-long spaceflight experience said to be offered on Neptune One, the passengers traveling in Blue Origin’s space rocket would only be able to spend 11 minutes of their life in space.

In a recent interview with Business Insider, Space Perspective founder Jane Poynter revealed that Space Perspective aims to launch its first crewed test in 2023. Then, most probably from the following year, commercial space missions, and by the year 2030, their company is planning to conduct about 500 space voyages annually.

For now Neptune One seems like an efficient and promising option for sub-orbital space travel. However, it would be very interesting to see how much popularity and success this super-calm space balloon technology achieves, amidst the lineup of fast space rockets that are being developed by billion-dollar companies like SpaceX, Virgin Galactic, and Blue Origin.