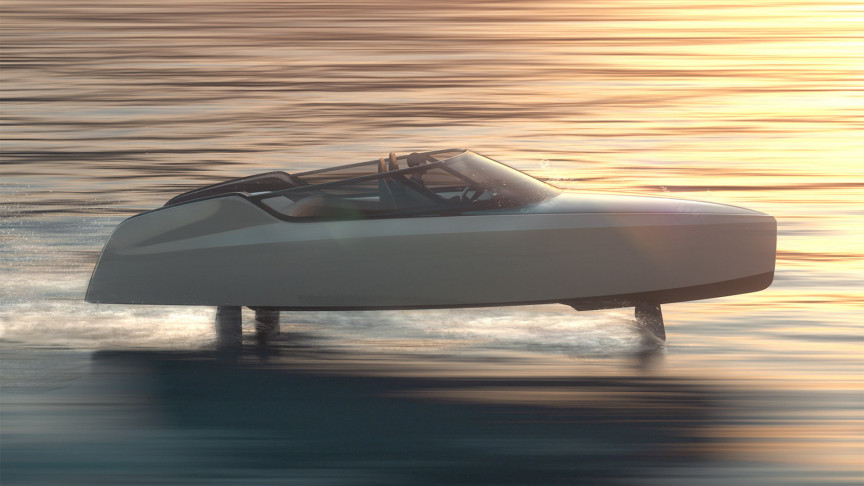 Dutch powerboat firm Edorado announced the launch of a new zero-emission hydrofoil powerboat that it claims is “destined to change the future of powerboating via pioneering clean technology,” a press statement from the company reads.

Edorado’s 8S is the latest zero-emission powerboat designed with reduced noise pollution and a cleaner footprint in mind. Edorado’s co-founders Giel Groothuis and Godert van Hardenbroek set out to disrupt the powerboat market with a retractable hydrofoil design powered by an electric drive-train.

When the 8S picks up speed — it can reach up to 38 knots (70 km/h) — it literally takes off, and the main body glides over the waves thanks to its hydrofoil design. “Unlike traditional powerboats – constantly smashing into waves – the Edorado flies right over the surface, like a sports aircraft, said van Hardenbroek. “It glides silently over the water: a new and totally unique feeling, like combining the speed of a powerboat with the tranquillity of sailing.”

The 8S features a unique hydrofoil system equipped with a proprietary Automatic Control System. The smart system makes constant adjustments to the two foils for a stable ride. The powerboat also comes with a “twin drive” system that lets the vessel turn in place, making docking much easier for its captain. Take a look at Edorado’s 8S prototype in action in the video below.

The 8S was designed for more than futuristic luxury boating — the zero-emission machine will help to tackle the large carbon footprint of leisure boating, making the practice much more sustainable in the process. “What is considered innovation in the boating industry just doesn’t cut it anymore in the current reality of the climate crisis. What is needed is a rapid transition to zero emissions, also for the leisure industry. After owning petrol-fuelled boats I realized that a complete overhaul of this product category is long overdue.”

Unsurprisingly, the luxury Edorado 8S comes with a hefty price tag of €350,000 ($414,000). Despite the inevitable talk from Edorado of disrupting the powerboating industry, the impressive vessel will actually face healthy competition in the zero-emission powerboating space. The Swedish firm, Candela, for example, unveiled a zero-emission hydrofoil powerboat, the Candela C-8, just last month. Another Swedish boatmaker, X Shore, unveiled its zero-emission powerboat, the Eelex, in 2019. That same year, a study revealed that Sweden’s shipping industry emitted more greenhouse gases and air pollution than its domestic aviation. Hydrofoil technology, meanwhile, will also be the focus of a new powerboat racing series, called the E1 series, that is set to launch in 2023.