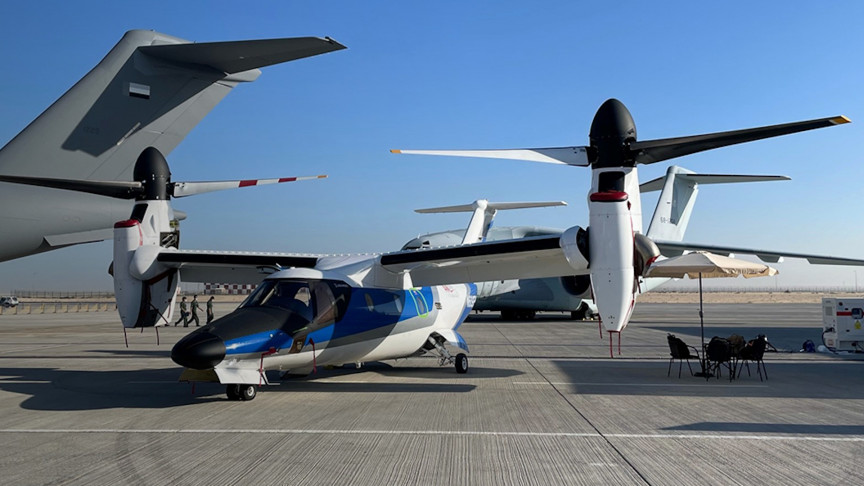 Italian aviation firm Leonardo showed off its AW609 tiltrotor aircraft at the 2021 Dubai Airshow this month, as the aircraft inches its way to taking to the skies, a report from NewAtlas reveals.

The unconventional aircraft might finally be nearing FAA flight certification, close to two decades after it made its first test flight.

The AW609 first took to the skies in 2003 and it has been renamed several times over the years, having started off as the Bell/Augusta BA609. Sadly, a fatal crash during test flights in 2015 led to the death of test pilots Herb Moran and Pietro Venanzi and stalled progress on the tilt-rotor aircraft. This year, however, it looks to be firmly back on track following new updates from Leonardo as well as its recent showing at this year’s Dubai Airshow.

Leonardo points out in a press statement that the AW609 is able to change the position of its rotors from vertical to horizontal in less than 60 seconds. Effectively, this makes it an eVTOL aircraft, as it takes off vertically, but can then fly like an airplane. Unlike most eVTOL aircraft, such a VoloCopter’s multirotor flying taxi, the AW609 only has two propellers, making it a little more traditional in some respects, while also having a really unusual design, compared to recent comparable models.

Watch a video of the AW609 in action, including its shift from take-off to cruising mode, in the video below.

The AW609 is designed to carry out a variety of missions, including search and rescue, medical transportation, as well as your run-of-the-mill passenger trips. The aircraft has a range of approximately 869 miles (1,400 km), which can be increased to 1,242 miles (2,000 km) with auxiliary tanks, and it flies at over 310 mph (500 km/h), according to Leonardo.

Last month, Leonardo’s CEO Alessandro Profumo told Reuters in an interview that he expects the AW609 to be awarded FAA certification by 2022. Leonardo has so far built four prototypes of the aircraft, and it is currently developing two production versions of the AW609, as well as a training academy for pilots to learn how to fly the unusual aircraft.

Last week, we reported on another unusual eVTOL aircraft called the eMagic One, which also maximizes efficiency by flying like an airplane while being able to take off and land vertically. Designs such as the eMagic One and the AW609 can help to vastly improve the range of flying taxis, which are currently limited by battery technology and can typically only fly for short periods before needing to recharge.