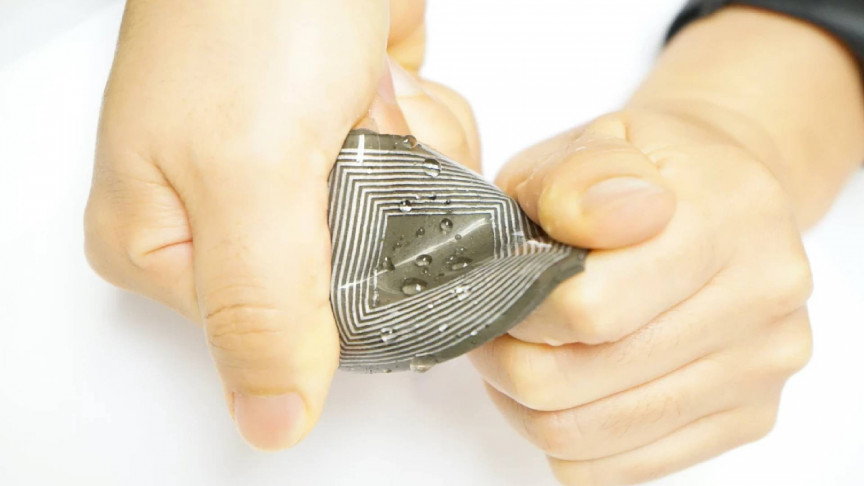 We have often reported on piezoelectric material that can transform stress into electricity but so far these materials have had limited capabilities like the inability to produce enough energy to be viable or to function if they get a little wet. That’s all about to change.

A new invention consisting of magnetoelastic generators, composed of a platinum-catalyzed silicone polymer matrix suspended inside of which are nanoscale neodymium-iron-boron magnets, has been devised that results in soft and flexible super-efficient self-powered bioelectronic devices.

The tech uses human body movements to power wearable and implantable diagnostic sensors. Better yet, it even works when wet which means rain or sweat won’t deactivate it.

“Our finding opens up a new avenue for practical energy, sensing and therapeutic technologies that are human-body-centric and can be connected to the Internet of Things,” said study leader Jun Chen, an assistant professor of bioengineering at the University of California at Los Angeles’ Samueli School of Engineering, in a statement.

“What makes this technology unique is that it allows people to stretch and move with comfort when the device is pressed against human skin, and because it relies on magnetism rather than electricity, humidity and our own sweat do not compromise its effectiveness.”

Chen and his team further reported that the magnetoelastic effect they observed with their invention was four times greater than rigid metal alloy devices of the same size.

In fact, the device generated electrical currents of 4.27 milliamperes per square centimeter. This is 10,000 times better than previous conventional technologies.

And there are plenty of other similar technologies being tested. Unfortunately, they lack the practicality that Chen’s device offers either by being too rigid to bend sufficiently to compress against the skin or by relying on static electricity that does not generate enough energy and suffers in humidity.

Meanwhile, Chen’s wearable magnetoelastic generators continued to perform at superior levels even after being soaked in artificial perspiration for a week. Chen and his team have now filed a patent for the technology and are looking forward to discovering new and useful applications for it.