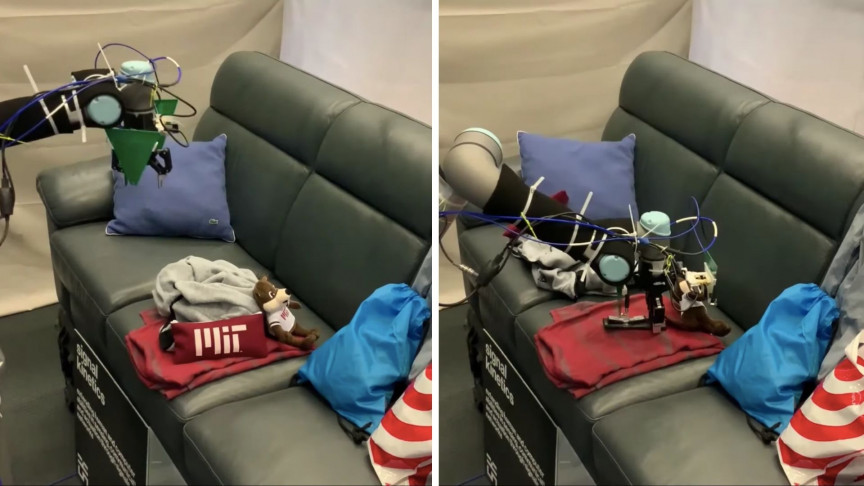 We’ve all misplaced our house keys, our phones, or our credit cards at some point, and we’ve probably all wished we had a special device that could quickly find it for us as we rush out the house.

Scientists at MIT have made many people’s wishes come true by building a robot arm called RFusion that uses a gripper, a camera and a radio frequency (RF) antenna to locate lost items for its owner, a press statement reveals.

In a new paper, the researchers explain how the robot can impressively locate and retrieve an item, even if it is covered by other objects and completely out of view of the main camera. All the robot’s owner has to do is attach RFID tags — cheap, battery-free tags that send signals to the antenna — to their valuable possessions.

“This idea of being able to find items in a chaotic world is an open problem that we’ve been working on for a few years. Having robots that are able to search for things under a pile is a growing need in industry today. Right now, you can think of this as a Roomba on steroids, but in the near term, this could have a lot of applications in manufacturing and warehouse environments,” senior author Fadel Adib explained in MIT’s statement.

The robot combines camera footage with signals sent by the RFID tags to narrow down the object’s location. Once it has a general idea, it uses a reinforcement-learning enabled approach to sift through any detritus to pick up the missing object. The reinforcement learning algorithm used in RFusion enables the machine to make the fewest movements possible to get to the object, making it increasingly more efficient. Once it has the object in its gripper hand, it can scan it one last time to make sure it is holding the correct object.

The new robotic arm adds to MIT’s other recent work on a “digger finger” that could be used to dig through rubble or soil to locate subsurface bombs. That machine uses a tactile sensor technology called GelSight that creates detailed 3D maps via artificial touch. While RFusion might be used for the more mundane tasks of a smart home assistant, the good news is that tests showed it could locate misplaced objects hidden under a pile with a 96 percent success rate, meaning we might soon never have to worry again when it comes to retrieving our house keys in a panicked hurry when we’re running late for an appointment. The researchers also hope their machine can be deployed in manufacturing and warehouse settings in the future, where plenty of products are lost along the supply chain every year.