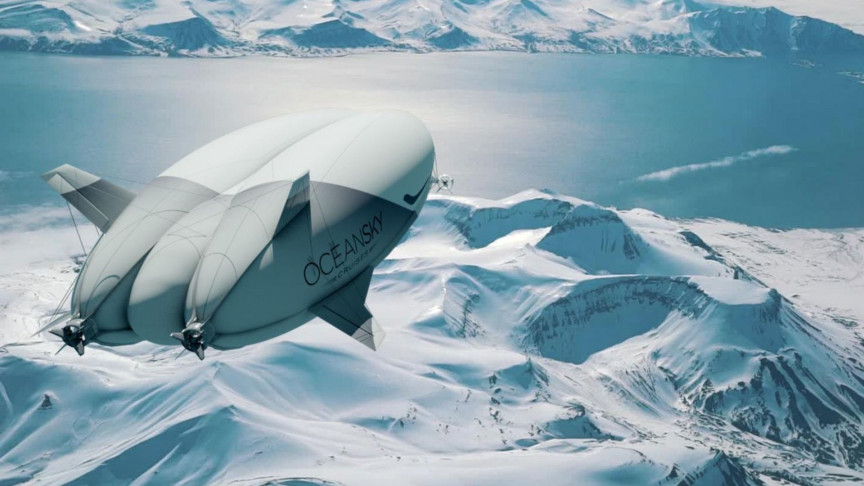 The aviation industry made up 2.5% of the total CO2 emissions in 2018 alone, and aviation emissions have doubled since the mid-1980s. So, it would only be wise to look for a more sustainable aviation option. That’s where airships come in — or make a come back?

Commonly used in the 1920s-30s, airships’ popularity crashed after the infamous Hindenburg disaster where the German passenger airship LZ 129 Hindenburg caught on fire that started by an electric spark, exploding the airship when it met with hydrogen.

Now, a Swedish aviation company, OceanSky Cruises announced that it’ll be starting cruises to the North Pole onboard luxury airships starting from 2024. The company that focuses on reducing the carbon emissions in the aviation industry has revealed that the airships will be powered by Lighter-than-Air technology, meaning that they’ll use gas to stay afloat — today, airships are powered by the safe non-flammable gas helium. Light by their nature, airships float similar to a boat in the water, requiring less energy compared to airplanes by as much as 80% that makes for an extremely efficient and sustainable design.

While planes are five times faster, airships can fly the same distance in lower altitudes and with less resistance due to their slow pace. Resistance increases by the square of the speed, and by flying slow, airships preserve energy. So, it’s basically a matter of choice: would you rather fly faster and contribute to aviation emission or fly at the speed of a train on board a greener option?

Airships also have smaller engines compared to airplanes meaning that they also have less horsepower. However, they have more engines, so that when an engine problem occurs, it’s not really that big of an issue on an airship.

Not only fly slow, but airships also take off and land at slow speeds that dramatically reduce the chance of a collision since most airplane accidents happen during take off or landing. What’s more, since they’re floating in the air, they can just as well float on water in case of an accident. Made with strong, rip-proof skins and layers, airships need only a fraction of the energy and money spent in building airplanes.

The journey to the North Pole

OceanSky plans to use these perks to its advantage and is planning on revolutionizing the aviation industry one airship at a time for a sustainable future. The company’s first flight will be to the North Pole. Taking flight from Svalbard, the trip will take a whopping 38 hours until it reaches the final destination, and the crew will be spending six hours in the North Pole.

The company explains that its airship is similar to a luxury yacht. The spacious airship will feature 8 double cabins at 100 sq ft (10 m2) that are fully equipped with large panoramic windows, a private bathroom, and a wardrobe.

With large windows at the bottom of the airship that flies on low altitudes, the passengers could enjoy the amazing sceneries during the whole trip.

Until we have commercial electric planes that (hopefully) could go on to revolutionize aviation industry, we could do our part in helping reduce the carbon emissions that contribute to climate change by choosing environmentally friendly options such as airships at the small price of sacrificing some time.