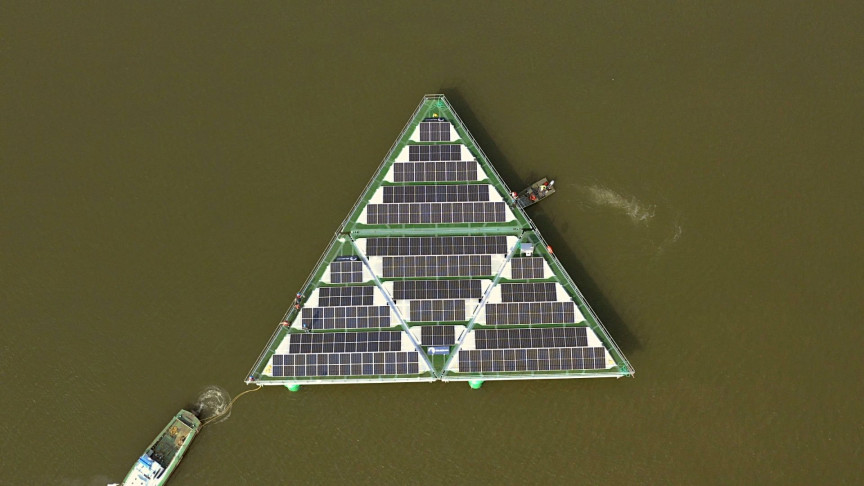 A new solar power platform is making waves in the way we think about renewable energy, advancing a novel form of offshore floating arrays. Called the “Demonstrator,” the platform was recently towed upriver in the Netherlands to simulate some of the wind and water stresses of being out at the open sea, and it passed with flying colors.

While the ideal environs for SolarDuck’s creation are cities and islands near the equator (where there’s less wind for wind power), the next Demonstrator variant “can withstand hurricane forces” experienced in and around Bermuda and Florida, explained CTO Don Hoogendoorn of SolarDuck, in a video interview with Interesting Engineering.

And considering the quickening pace of climate change, the timing of Demonstrator’s entry into the world is apt. Cities everywhere from Tokyo to New York are beginning to take a serious look at the logistics of pivoting away from fossil fuels. But many lack the primary economic force that makes cities attractive: Available real estate. “Cities like Hong Kong, Singapore, and other islands are out of land,” said Hoogendoorn. And these platforms could begin to power significant communities all around the equator, where the sun is constant but wind is scarce, leaving wind power impractical.

For example, in Hong Kong, Hoogendoorn and his colleagues at SolarDuck considered putting solar panels on top of skyscrapers, “but you can only generate 10% or 11% of the city’s energy needs,” he said. And land is very expensive, with many new houses in the city now built as floating structures. Despite this limitation, many global leaders have practical reasons to prefer solar over wind. “Solar is by far the cheapest method to produce renewable energy” in the sunbelt, according to an AltEnergy Mag report. The sunbelt is the global ring near the equator where sunlight is abundant, but wind is not.

SolarDuck’s next ‘Demonstrator’ will be 13 times bigger

“The idea is based on our offshore heritage,” said CEO SolarDuck Koen Burgers in a PV Magazine report. “Our company is a spinoff from the research department of the Damen Shipyards Group in the Netherlands, a company which uses the best of industry practice to design a reliable solution which is able to cope with the harsh maritime environment.” Notably, the Damen Shipyards Group designed the 154-ft (47-m) boats used by the U.S. Coast Guard.

“Of course, at sea, everything can move,” said Head of Section Offshore Engineering Professor Andrei Metrikine at Delft University of Technology, who is also chair of dynamics of solids and structures, in a promotional video of the Demonstrator’s recent upriver test. This means solar power platforms need to withstand much heavier forces, which is why the next Demonstrator variant will be 13 times larger, according to Hoogendoorn. But, obviously, solar panels won’t float on their own. Likewise, any contact with seawater can seriously damage electronics and other materials of the array. But there’s another, even more fundamental challenge in high-wind scenarios.

“The upward and downward direction of lift is significant — you don’t want the floating solar panel assemblies to fly away,” said Hoogendoorn. “You want them to be stiff enough” to remain sturdy, but also resistant to fouling and algae growth. The shape of the platform, too, is crucial for an offshore floating platform. Squares, for example, are not ideal. “When you have a torsional wave — which is a wave coming toward the square at 45 degrees — one side of the platform will move upward, but the other will move downward,” explained Hoogendoorn. Unlike other offshore solar platform companies, SolarDuck turned down the square design in favor of something more elegant. “If you look at lightweight structures, like cranes, oil rigs, the Eiffel Tower, they are all triangles.”

Additionally, the tilt angle of the solar panels adds a bonus cleaning effect when it rains. “Very lightweight, stiff, strong,” the triangular design “can warp with additional loads,” explained Hoogendoorn. And, of course, triangles slide right into each other. While initially only testing one model, the company plans to scale up the already large Demonstrator assembly soon. “We want to go for 10-MW plants — about 240 m by 240 m (roughly 790 ft by 790 ft), which is roughly 10 by 10 platforms,” said Hoogendoorn. “Basically, that’s approximately 100 platforms connected together.”

“This will give you a 10-MW peak, which is equal to a new offshore fixed wind turbine,” added Hoogendoorn. And it won’t stop there. “Then you can build a farm with a 500-MW peak power output with 50 of those 10 by 10 assemblies — equivalent to an offshore wind farm.” There’s much to be done before solar power platforms like SolarDuck’s stretch around the globe, but in the coming years, leaders in cities like Singapore and Hong Kong may have a new way to drastically scale efforts to generate sustainable energy.