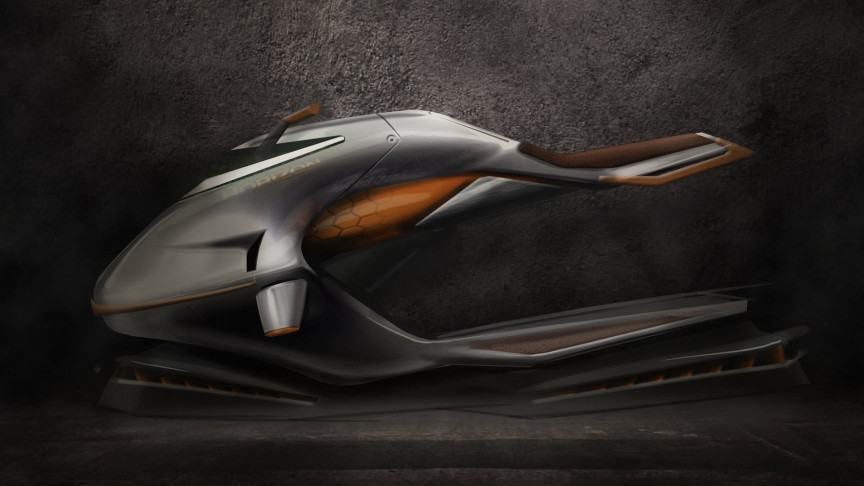 Horizon Aeronautics wants to make a hoverbike that eschews the traditional multi-rotor configuration of other eVTOL concepts.

The U.S.-based firm is developing a prototype for a commuter-friendly eVTOL hoverbike that uses a “novel hemispherical lift-rotor configuration” developed by Blainjett Aviation, a press statement reveals.

Horizon’s hoverbike looks remarkably like a floating jet ski. The eVTOL aircraft is powered by a hybrid-electric powertrain, but it’s Blainjett’s Dynamic Variable Pitch (DVP) technology that really sets it apart. DVP allows rotorcraft to generate vectored thrust, allowing higher speeds at level forward flight without the need for any complex tilt-rotor technology seen on the likes of the Leonardo AW609.

Rather than having the aircraft tilt forward like a helicopter to generate forward thrust, Blainjett’s DVP concept changes the pitch of the rotor blades via a cam and flexible plate mechanism. According to Blainjett, such a system is perfect for hoverbikes and low-flying eVTOL aircraft as riders will generally need to remain level so as not to fall off and cause accidents.

Horizon aims to develop a full prototype this year

Now, Horizon and Blainjett have teamed up to develop the former’s nine-foot-long, four-foot-wide hoverbike. On Horizon’s website, the company says the hoverbike will have a rider capacity of 1-3 people, and that it will have a dry weight capacity of 380 kg (837 lbs).

The new design partially encloses the multi-blade rotors inside the body of the hoverbike. Using Blainjett’s rotor technology, the Horizon hoverbike’s blade pitch is increased only as the rotors pass through an exposed outer section of the hoverbike’s spinning rotor arc to generate that forward momentum. In its press statement, Blainjett says that “compared to complex many-rotor or ducted fan designs, [the new system] achieves greater thrust and power distribution efficiency with a small number of larger hemispherical rotors.”

“It turned out when we compared our thrust output and efficiency to ducted fans and smaller rotors we were 2-3 times more efficient with 2-3 times more power density while fitting in the same available space,” said Blainjett president Cary Zachary. “There’s also a reduction in aerodynamic drag in forward flight.”

Horizon aims to produce a fully functioning prototype using Blainjett’s patent-pending hemispherical rotor design by late 2022. So far, nothing has been revealed in the way of pricing for a final model, and little has been revealed in the way of specifications. As a point of reference though, another company, Japan’s A.L.I Technologies, is developing a $680,000 eVTOL hoverbike. Unlike Horizon’s hoverbike, that model uses a traditional multi-rotor configuration.