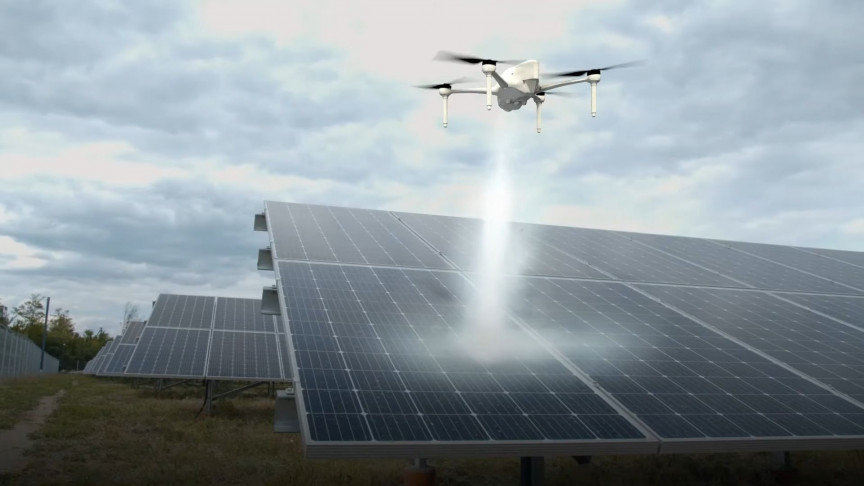 We have brought you news of solar-powered drones but what about drones used to clean solar panels? Solar panels perched atop tall buildings or in remote locations often accumulate a lot of dirt and dust but getting them cleaned is a complicated often impossible task.

Now, a joint effort between Israeli solar farm services company Solar Drone and Israeli drone manufacturer Airobotics is looking to find a solution to this problem. They have developed drones capable of cleaning these hard-to-reach solar panels without damaging them.

Solar Drone’s website says that the new model “addresses the problem of dust and sand build-up on panel surfaces, located on any surface, under all weather conditions (and) reduces cleaning costs by at least 25%, because of the unique and efficient cleaning methods.” It also adds that the drone is fully autonomous.

Solar Drone describes its new drone as a “Drone in a Box” system, based on advanced technologies such as Image Generation, Artificial Intelligence, Machine Learning, Data Mining, Real-Time Analysis, Cloud, and more that increase PV, operational, and asset efficiency while reducing costs.

How will it work?

When it’s time for a cleaning, a quadcopter located inside a weatherproof docking station situated near the solar panels will exit its station and take off and fly up to the panels. There, using its previously explained advanced technology, it will align itself above each panel spraying it with cleaning fluid,

It will do this one by one to each panel. Once the cleaning is done, the drone will return to its docking station where it will be safely stationed once more. There, a robotic system will then replace its battery with a fully charged one and refill its cleaning fluid tank. The drone will then be ready for another cleaning round whenever that is required.

It’s still unclear when the new system will go to market but we can venture a guess that it will be quite popular when it does.