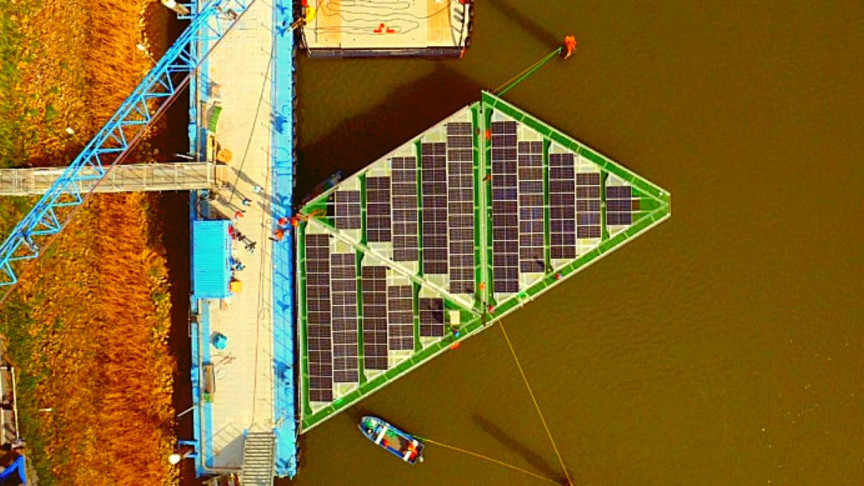 You don’t need land to harness the sun.

This is why SolarDuck, a next-gen designer and manufacturer of floating solar panel arrays, has signed a memorandum of understanding for the development of 555 Megawatt-Peak of offshore solar projects in the coming years, according to a press release shared with IE.

Working with the other signatory on the memorandum, Pondera, which is a well-known consulting firm and project developer in renewable energy, SolarDuck aims to develop new floating solar array projects from 2023 to 2025.

And, while the first colossal floating solar platform projects will be located in the Netherlands, future projects will see installations in South-East Asia.

Together, SolarDuck and Pondera will develop novel solar technology to deliver sustainable energy to cities and global regions that have bountiful sunlight but experience difficulty tapping solar energy because of a scarcity in available land (think crowded urban areas on islands, like Singapore). SolarDuck’s novel technology offers a new way for communities and businesses in such scarce real estate scenarios to bypass constraints and gain access to clean energy at competitive prices. By 2023, the two firms aim to develop floating solar arrays equivalent to 5 MWp. Megawatt-peak is a term that describes the power output expected in ideal conditions, which means little-to-no cloud cover, with no other weather or mechanical-related disruptions to power intake.

And, by the end of 2025, the sustainable duo project a total solar power output of 555 MWp. And they’ve already begun scouting the perfect locations for these forthcoming projects. “I am excited about our cooperation, and the scale of our combined projects,” said Koen Burgers, CEO of SolarDuck, in the press release. “In Pondera, we found a partner who not only shares our global ambitions, but also the drive to make these plans become reality. They have a long and impressive track record which we intend to broaden with the addition of Offshore Floating Solar.”

Both companies have headquarters in the Netherlands. Pondera has worked in renewable projects that’ve generated more than 10 GW, “of which over 3 GW is operational and another 3 GW” remains under construction, read the press release. SolarDuck consists of a collective of maritime and energy professionals dedicated to generating solar power offshore at utility scales. Earlier this year, the company tested a floating solar platform called the “Demonstrator,” which was towed upriver in the Netherlands to simulate the composite effects of wind and water stresses expected on the open sea. And, crucially, the next Demonstrator variant, which will be 13 times larger, and “can withstand hurricane forces” that happen near Florida and Bermuda, said SolarDuck CTO Don Hoogendoorn, in a video interview with IE.

SolarDuck’s floating solar power platforms can resist some of the worst conditions at sea, including hurricane-force winds. But they can also be optimized for estuaries, natural harbors, and other near-shore regions, withstanding waves surpassing 10 ft (3 m) in height. While it may seem strange to build solar arrays on the water, an educated assessment reveals how crucial this idea has become. Cities around the world, from Tokyo to New York, are finally looking for viable alternatives to fossil fuels as the effects of global climate change on populations, animals, and biodiversity, in general, are mounting pressure. But coastal cities lack a crucial resource: land. “Cities like Hong Kong, Singapore, and other islands are out of land,” Hoogendoorn told IE. But in teaming up with Pondera, SolarDuck has set itself on a short- and long-term path to bringing floating solar platforms to reality.