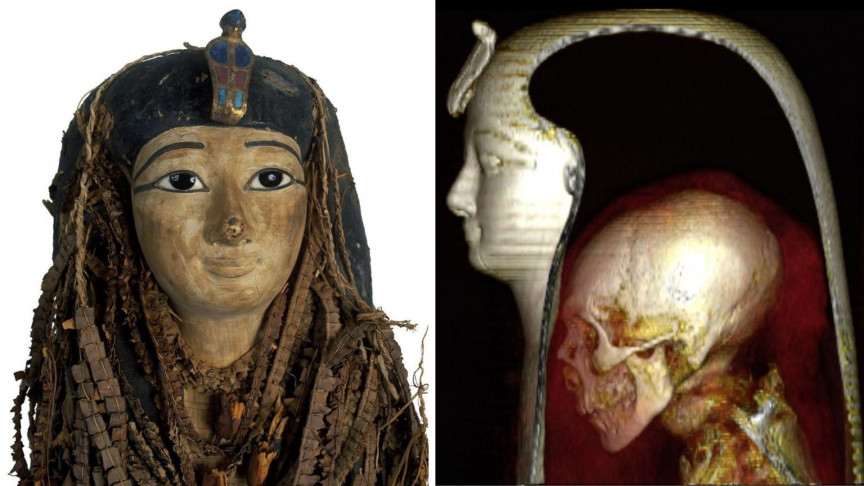 A new study unraveled the mysteries Egyptian Pharaoh Amenhotep I’s perfectly preserved mummy holds thanks to three-dimensional CT scanning for the very first time in centuries. The study was published in the journal Frontiers in Medicine.

Even though the 3,500-year-old mummy has been discovered way earlier than its digital unwrapping, the scientists were unwilling to ‘spoil’ the beautifully preserved mummy by uncovering the Pharaoh’s body.

Amenhotep I, along with his mother Ahmose-Nefertari, was the ruler in Ancient Egypt during the civilization’s golden era. After their deaths, they both were worshipped as gods by their subjects. This is considered to be the reason why the Pharaoh’s mummy was buried with perfect linen wrappings covered with flowers and a painted life-like facemask covered with colorful gems.

Now, thanks to modern technology, we’ve been able to take a look inside without meddling with the exterior of the mummy. Dr. Sahar Saleem, professor of radiology at the Faculty of Medicine at Cairo University and the radiologist of the Egyptian Mummy Project, and first author of the study said “This fact that Amenhotep I’s mummy had never been unwrapped in modern times gave us a unique opportunity: not just to study how he had originally been mummified and buried, but also how he had been treated and reburied twice, centuries after his death, by High Priests of Amun.”

She added that “by digitally unwrapping of the mummy and ‘peeling off’ its virtual layers – the facemask, the bandages, and the mummy itself – we could study this well-preserved pharaoh in unprecedented detail,” in the study.

The study offers great details about Amenhotep I’s facial features and what’s inside his wrappings. According to the findings, the Pharaoh was 35 years old when he died. At 5 ft 6 in (1,69 cm) tall, he was circumcised with good teeth. “Within his wrappings, he wore 30 amulets and a unique golden girdle with gold beads.” Computer-generated imagery revealed that “Amenhotep I had a narrow chin, a small narrow nose, curly hair, and mildly protruding upper teeth.”

While the Pharaoh’s cause of death remains uncertain, what struck the team most was discovering that Amenhotep I’s brain was intact, which sets him apart from other mummies including Tutankhamun and Ramses II.

With new technologies emerging every day, scientists are finding new ways to look into our history and learn more about our ancestors without damaging ancient fragile materials and structures.