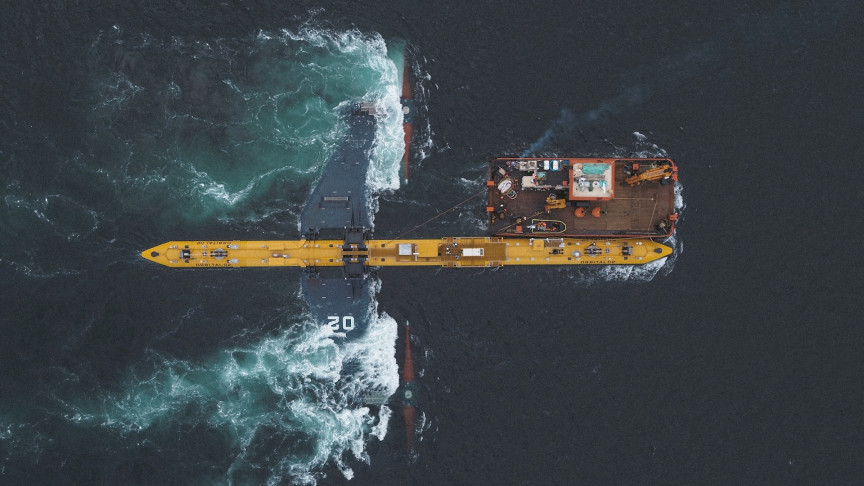 The marine machine, which Orbital Marine Power describes as “the world’s most powerful” tidal turbine is now connected to the grid at the European Marine Energy Centre in Orkney, an archipelago of islands off the northeastern coast of Scotland.

Orbital Marine Power explains that its 74-meter-long O2 turbine uses twin 1MW power generating nacelles positioned at the end of retractable legs, designed for easier maintenance. The machine’s 10-meter blades give the tidal turbine “more than 600m2 of swept area to capture flowing tidal energy,” the company explains in its statement. And the massive machine won’t be floating away aimlessly as it collects energy — a four-point mooring system, capable of lifting over 50 double-decker buses, keep it anchored to the seafloor. A dynamic cable is used to wire generated electricity down to the seabed, where a static cable takes it to the grid.

The turbine is expected to “operate in the waters off Orkney for the next 15 years,” the company explained in its press statement, and it will have “the capacity to meet the annual electricity demand of around 2,000 UK homes.” Not only that, the turbine will also send electricity to an onshore electrolyzer that will generate green hydrogen in order to further help with the transition away from fossil fuels.

“This is a major milestone for the O2,” Orbital Marine Power’s CEO, Andrew Scott, explained. “Our vision is that this project is the trigger to the harnessing of tidal stream resources around the world to play a role in tackling climate change whilst creating a new, low-carbon industrial sector.” The O2 project is funded in part by the Scottish government, which provided £3.4m ($4.7m) via its Saltire Tidal Energy Challenge Fund. It has also received funding from public lenders through the ethical investment platform Abundance Investment.

Turning the tide on climate change

Michael Matheson, Cabinet Secretary for Net Zero and Energy in the Scottish government, described the deployment of O2 as a “proud moment for Scotland and a significant milestone in our journey to net-zero.” Industries across the country have made pledges to reach net-zero carbon emissions. The whisky industry in Scotland, for example, recently announced it aims to reach net-zero by 2040, and one firm is already running delivery trucks on biogas derived from the whisky-making process.

In the future, Orbital Marine Power is planning “on commercializing its technology through the deployment of multi-MW arrays.” The company joins a host of firms globally aiming to take on the increasing challenges of climate change — in doing so, they hope to turn the tide on the growing list of detrimental effects of humankind’s drawn-out extraction of fossil fuels on our planet.