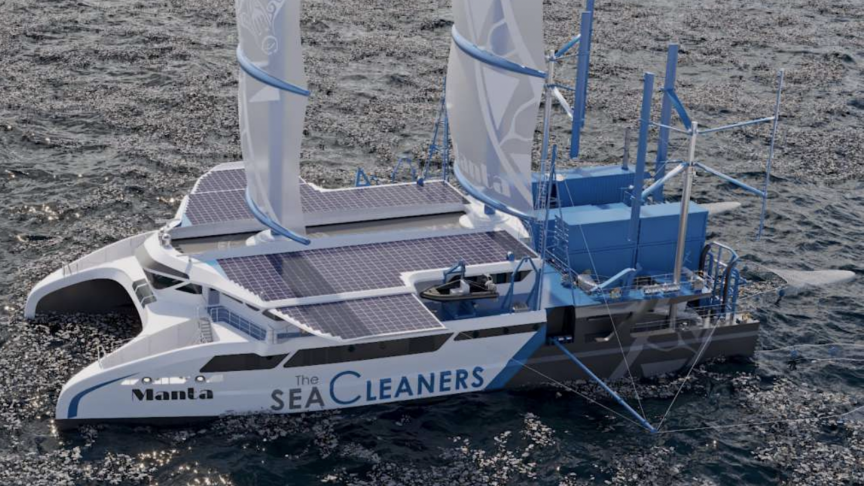 A French ocean adventurer and a team of engineers designed a yacht that feeds on plastic waste for power — the sea vessel literally scoops up plastic garbage and converts it into fuel to help power the boat, a recent report by Reuters reveals.

The leader of the project, Yvan Bourgnon has years of experience career racing sailing boats around the world’s oceans. Bourgnon says that throughout his racing years, to his dismay, he saw a steady increase in encounters with floating fields of garbage in the ocean.

This is what inspired him to start the SeaCleaners project and build a team to create the Manta, a 56-meter (184 foot) catamaran powered by a combination of advanced sail technology and electric motors.

The Manta is currently in the development and concept phase, though Bourgnon and his team aim to have a working prototype by 2024. At 56-meters long, the ship will be one of the largest to directly collect plastic waste from the sea.

As the catamaran sails through the water, a conveyor belt will collect waste, organize it, and then feed it into a burner. The plastic will melt, producing gas that will drive a turbine, generating electricity for the ship’s motors.

The conveyor system is similar to the Ocean Cleanup project’s third-generation Interceptor vessel system — though that ship stores the plastic for processing on land, and is designed to clean the world’s rivers rather than its oceans.

The team behind the Manta says that they aim to make the catamaran 70 percent self-sufficient through the use of plastic for power, alongside solar cells and wind turbines.

Bourgnon told Reuters that if 400 of the boats were made, they could clean up a third of the plastic debris in the world’s oceans.

The Manta project joins a surge of new initiatives aimed at clearing the oceans of plastic in recent years, the most famous of which is undeniably the Ocean Cleanup project.

Recent advances in robotics have seen university projects develop autonomous machines that could also help with the problem, such as the Floating Robots to Eliminate Debris (FRED) student project and the SeaClear initiative aimed at cleaning the ocean floor.

With a recent study showing that the enormous Pacific Garbage Patch is growing at an exponential rate — though record hauls have recently been collected by the Ocean Voyages Institute — and 10 million tonnes of plastic waste ending up in the ocean every year, according to the World Economic Forum, the more vessels and machines tackling plastic waste at sea and on land, the better.