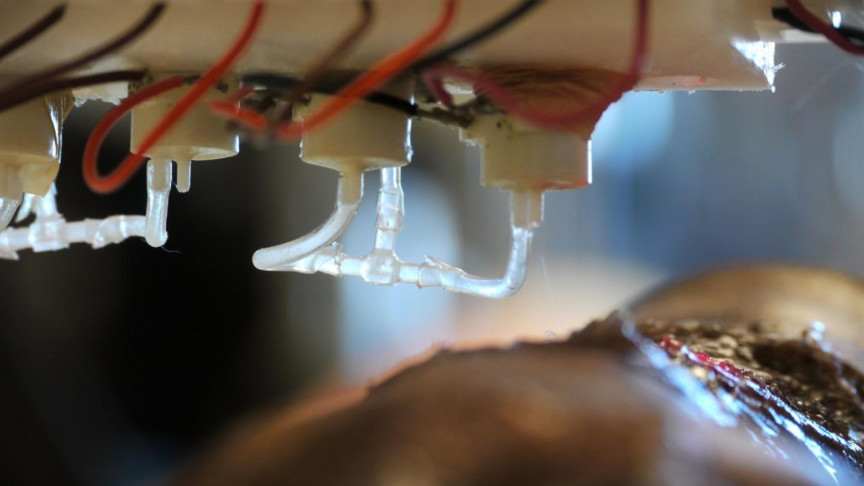 In recent years, updates in 3D printing technologies have allowed medical researchers to print things that were not possible to make using the previous version of this technology, including food, medicine, and even body parts.

In 2018, doctors from the Ontario Veterinary College 3D printed a custom titanium plate for a dog that had lost part of its skull after cancer surgery.

“By performing these procedures in our animal patients, we can provide valuable information that can be used to show the value and safety of these implants for humans”, said veterinary surgical oncologist Michelle Oblak at the time. “These implants are the next big leap in personalized medicine that allows for every element of an individual’s medical care to be specifically tailored to their particular needs.”

And not just for animal patients.

What is 3D bioprinting?

3D bioprinting is the utilization of 3D printing technologies to fabricate body parts. Bioprinters work in a similar way to 3D printers. However, instead of depositing materials such as plastic or ceramic, they deposit layers of biomaterial, including living cells, to build complex structures like blood vessels or skin tissue.

The required cells are taken from a patient and then cultivated. These cells are usually combined with a carrier material or scaffold. This carrier is usually a type of biopolymer gel, which acts as a 3D molecular scaffold and provides protection for the cells during the printing process. Cells attach to the gel, which is sturdy enough to allow printing and flexible enough to allow the flow and diffusion of nutrients and the movement of cells. This combination of encapsulated cells and biopolymer gels is the bio-ink used by biomedical engineers to create 3D-printed, tissue-like structures.

Detailed computer designs and models are first made, often based on scans such as magnetic resonance imaging or computerized tomography taken directly from a patient. Precision printer heads then deposit cells and bio-inks exactly where they are needed and, over the course of several hours, an organic object is built up using a large number of very thin layers.

The cells are kept alive using liquefied nutrients and oxygen during the whole process.

In the post-printing stage, the structures may be crosslinked with UV light or ionic solutions to make them more stable. Cells are chemically and mechanically stimulated to control the remodeling and growth of tissues. Then, the 3D printed product is put into an incubator to allow the cells to grow.

When it’s ready, the structure must be used as soon as possible, unless the 3D bioprinting is combined with cryopreservative techniques — something that researchers from Brigham and Women’s Hospital and Harvard Medical School achieved last year.

The work, published on December 21st, showed how the team was able to 3D print tissues onto a cold plate at -4°F (-20ºC), after which they were preserved in a freezer at -320.8°F (-196ºC). The tissues, researchers said, can then be thawed within minutes for immediate use.

In 2018, biomedical engineers from the University of Utah developed a method for 3D printing ligaments and tendons. The method involves first taking stem cells from the patient and printing them on a layer of hydrogel to form a tendon or ligament. This is allowed to grow in vitro in a culture before being implanted. However, the process was very complex, because connective tissue is made up of different cells in complex patterns. The team first needed to develop a special printer head that could lay down human cells in the highly controlled manner they require.

To do this, the team partnered with Utah-based company Carterra, Inc., to develop a specialized printhead that would let them lay down cells in complex patterns. The printhead was then attached to a 3D printer normally used to print antibodies for cancer treatment.

With this technique, the scientists managed to 3D print stem cells taken from a patient’s body fat onto a layer of hydrogel. This hydrogel facilitates cell growth in vitro in a culture, forming either a ligament or tendon in the process.

The new tissue is then implanted in the damaged area of the patient’s body, eliminating the need for additional tissue replacement procedures.

Replacement tissues for those needing it are often harvested from elsewhere on a patient’s body or from a cadaver. However, tissue from cadavers runs a high risk of being rejected by the surrounding tissues or of being of poor quality and ineffective.

Instead, tissues created from the patient’s own cells can reduce the complications involved with a transplant and speed up the healing process.

3D bioprinting could also help us say goodbye to skin grafts in the near future, as doctors could be able to 3D print new skin for each patient.

Skin grafting is the transplantation of healthy skin from an animal, a human donor, or the patient’s own body to another part of his or her body where the skin is badly damaged. The procedure is commonly used to treat severe wounds, burns, ulcers, and infections, or after the removal of skin cancers.

But the technique involves several risks, from hemorrhages and loss of sensitivity to infections, scarring, and rejection.

This is why scientists from Wake Forest Institute for Regenerative Medicine (WFIRM)  are working on a mobile bedside skin bioprinting system that could let doctors print bi-layered skin directly on the patient’s wound.

“The unique aspect of this technology is the mobility of the system and the ability to provide on-site management of extensive wounds by scanning and measuring them in order to deposit the cells directly where they are needed to create skin,” said Sean Murphy, Ph.D., a WFIRM assistant professor who was the lead author of the paper.

To do this, the scientists isolated certain skin cells from a biopsy of healthy tissue and grew them in culture. After that, they combined the cells with a hydrogel and put them into the bioprinter. The device printed the cells onto the damaged area following the data extracted from the wound’s scan through a software.

Again, because the cells are taken from the patient’s own body, there is a much lower risk of rejection.

Meanwhile, in Dublin,  scientists from the RCSI University of Medicine and Health Sciences developed a hydrogel scaffold with natural platelet-rich plasma (PRP) that has promising regenerative properties. The compound can be used as a bio-ink to accelerate the wound healing process in 3D printed tissues.

“Existing literature suggests that while the PRP already present in our blood helps to heal wounds, scarring can still occur,” said RCSI Professor Fergal O’Brien. “By 3D printing PRP into a biomaterial scaffold, we can increase the formation of blood vessels while also avoiding the formation of scars, leading to more successful wound healing.”

Perhaps the ultimate goal of 3D bioprinting is to assemble functional organs and solve the problem of organ transplantation.

Currently, there are more than 100,000 people waiting for an organ on the U.S. national transplant waiting list. Roughly 17 of them die each day because they don’t receive the organ they need. This is largely due to the lack of donors. Although around 60% of Americans are signed up as donors, organ donation is only possible in 3 out of every 1,000 deaths.

3D bioprinting of organs could save a lot of lives, but scientists struggle to create the vascular structures needed to create viable printed organs. All organs, including 3D-printed ones, need an effective, continuous blood supply to prevent the death of the cells and the tissues.

In October 2021, a team of researchers at Israel’s Technion Institute of Technology managed to 3D print blood vessel structures to add a blood supply to tissue implants.

These structures grew spontaneously after the team implanted endothelial cells from the inner layer of blood vessels in the body in a polymeric collagen scaffold.

However, these are only microvessels that can be used to improve in vitro tissue development — they wouldn’t be able to, “feed” a whole organ, and so far, they don’t allow the integration of lab-grown tissues into the patient’s vascular system.

This study shows that there’s still a long way to go until we can actually 3D print organs on demand. But who knows which techniques can scientists develop to solve this issue in the future?