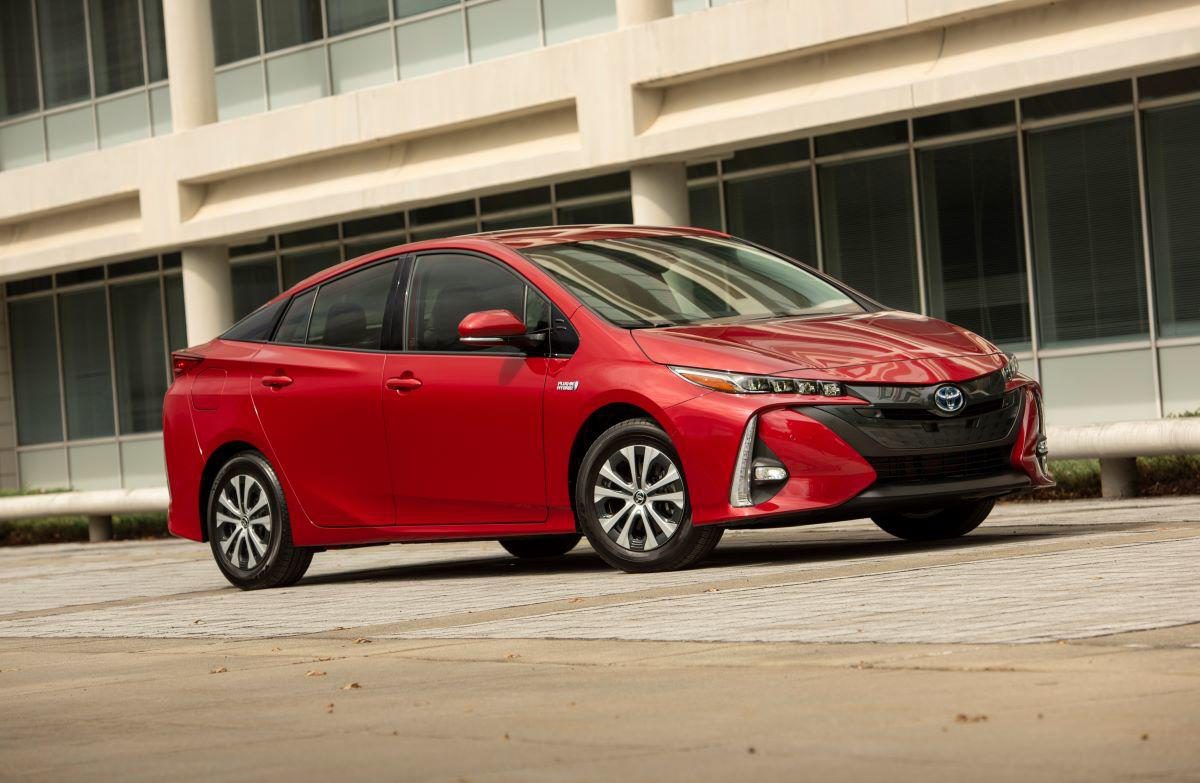 The Toyota Prius is
synonymous with hybrid vehicles and, prior to Tesla, was the car for
eco-conscious drivers looking to save fuel and flaunt it. The closest you can come to
getting a Prius EV is via the plug-in electric hybrid vehicle (PHEV) Prime. The 2020 Prime has an electric-only range of 25 miles on a full
charge, and an EPA-estimated combined
rating of 54mpg in hybrid mode. It offers lots of
standard features even on the base model, an 11.6-inch touch screen on upper
trims, and seating for five with the addition of
a rear bench seat. But Android Auto users are still out of luck, and the Prime’s
on-road performance leaves something to be desired.

The 2020 Prius Prime comes in
three trim levels—LE, XLE, and Limited—all with a 1.8-liter, 95-horsepower
4-cylinder engine and an electric motor that combined produce 121 horsepower.
The 8.8-kWh battery is charged via the hybrid system and regenerative braking, or by plugging it in an outlet. Fully charging the battery takes 5.5 hours
using the supplied 120-volt cord, or a little more than two hours via a 240-volt
Level 2 charger. Power is directed to the front wheel through a continuously
variable automatic transmission.

The XLE trim that starts at $29,800 adds a
power driver’s seat, simulated-leather upholstery, keyless entry on all doors,
wireless smartphone charging, AM/FM radio buffering, HD Radio with real-time
traffic and weather, an 11.6-inch touch screen, and a smartphone app for remote
charge management, climate control, and charging station and vehicle
finder features. With a few standalone options such as a roof rack, and a $930 delivery,
processing, and handling fee, our test car had a final sticker price of $36,031.

While the auto industry is increasingly accommodating the
public’s appetite for crossovers, the Prius Prime sticks with its rear hatch
heritage. The redesign of the fourth-gen Prius that debuted in 2016 gives the vehicle a more sedan-like look but with the convenience of a hatchback.

The Prime’s rear cargo area
is curtailed due to the battery stored underneath, so it provides significantly less
space than the standard Prius and some competitors. Otherwise, the interior of
the Prime is like other Prius models, roomy but utilitarian, with the instrument
cluster in the center of the dash.

The 11.6-inch vertically mounted
touch-screen infotainment interface is impressive in form, but not in function.
On the bright side, the display has large circular main menu icons that make it easy to get to certain
items such as setting up a charging schedule, and it supersizes
the navigation system’s maps and the climate controls.

On the other hand, the icons can’t be rearranged to your preference, and the lack of Android Auto is a rather glaring omission. Toyota was slow to adopt Apple CarPlay, which
is standard on the Prime along with Amazon Alexa compatibility. But if you own
an Android device, you can only use Toyota’s Entune smartphone integration
platform. 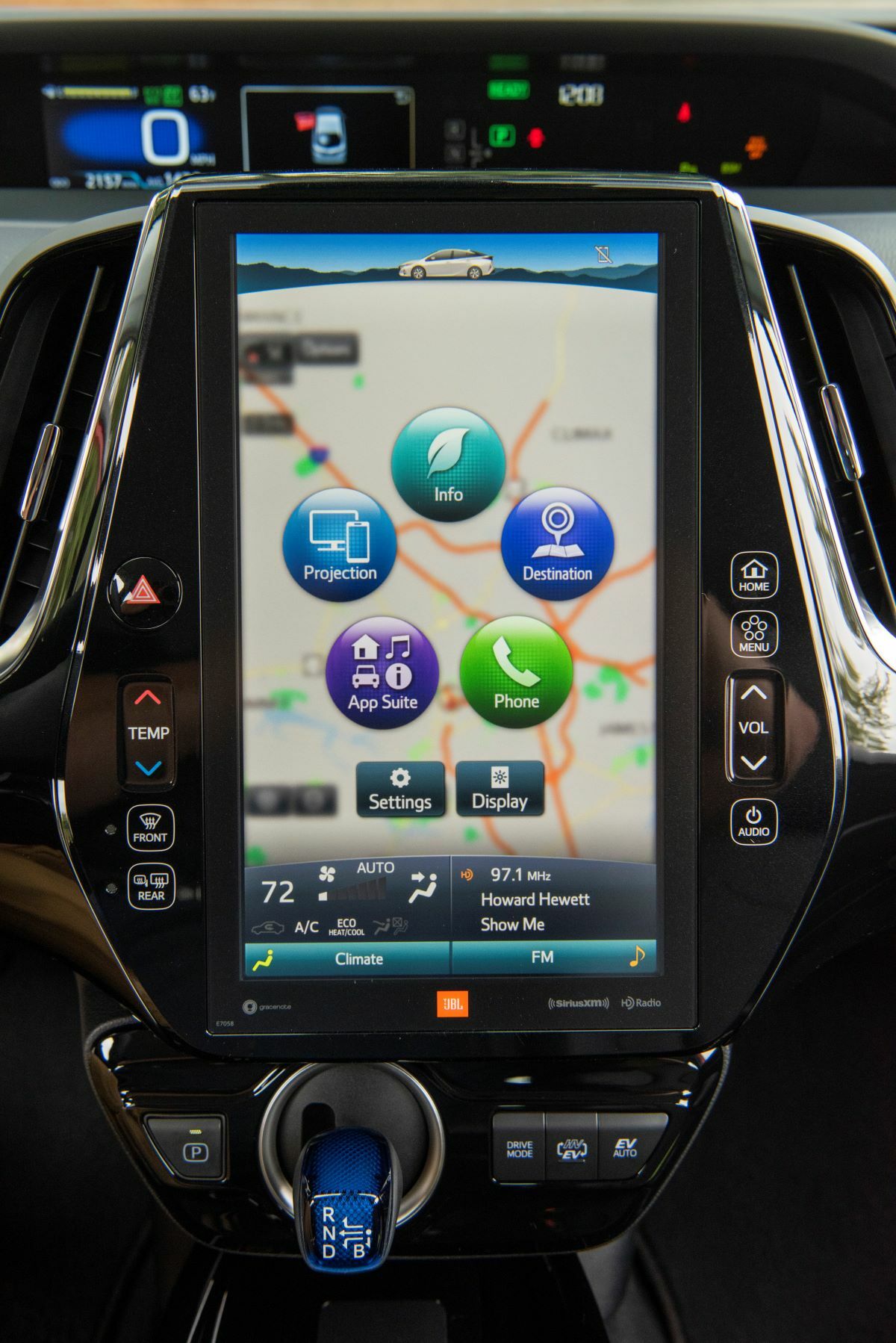 Via a companion app, Entune adds access to
cloud-based services such as Yelp, iHeartRadio, NPR One, and others. Our only real gripe with Entune is that it feels like the system needs a software update every few
days, but the updates are quick and can run in the background.

The center dash instrument panel cluster is a
bit distracting since the driver needs to glance right rather than just down.
But the dual displays provide plenty of PHEV-friendly features—everything from the
time to a full charge to how much your driving and AC use are influencing fuel
efficiency.

No one buys a Prius strictly for its on-road performance, but we found in EV-only mode the Prime provides fun,
torque-y acceleration and handles well, with a bit of a go-cart feel when running
solely on electrons. We were able to wring about 20 miles of EV-only range from
the Prime Limited without even trying to conserve power. Once the battery runs
out of juice and the powertrain switches to hybrid mode, things slow down. 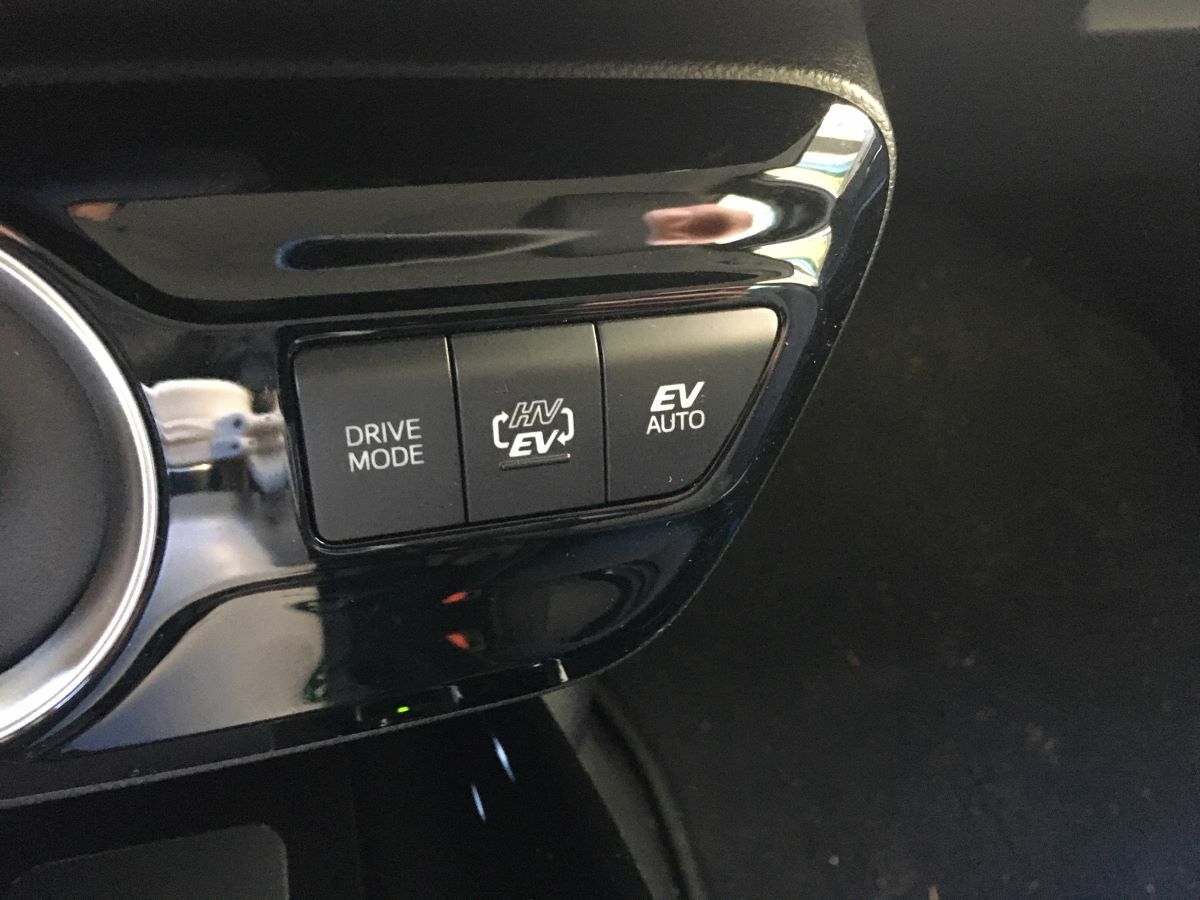 The hybrid system switches
smoothly and almost imperceptibly between gas and electric propulsion, but the
CVT gearbox exhibits a typical rubber band feel and harsh vibrations when
pushed hard. The Prime Limited’s three driving modes—Power, Normal, and Eco—have
only a slight effect on performance, except in Power EV-only mode.

Toyota discontinued its first
Prius plug-in hybrid at a time when the automaker was making money off of standard Prius
sales and it made sense to pull the plug on its first PHEV model. But times
have changed, and the time is ripe for more car buyers to take a second look at PHEVs for
gas-free short trips and high fuel economy for longer ones.

In this segment, that means you’ll want to compare the Prius Prime with the Hyundai Ioniq and the Honda Clarity, PHEVs
that have greater EV range and Android Auto. As a sedan, the Clarity is
larger and has more room for rear seat passengers, but the Prius Prime has a more
efficient gasoline engine than its rivals. If not for the drawbacks of
its infotainment system and quirky dash layout, we would easily recommend the 2020 Prius Prime. But with it due for a redesign, we can’t help but imagine these shortcomings will be corrected in the next go-round.