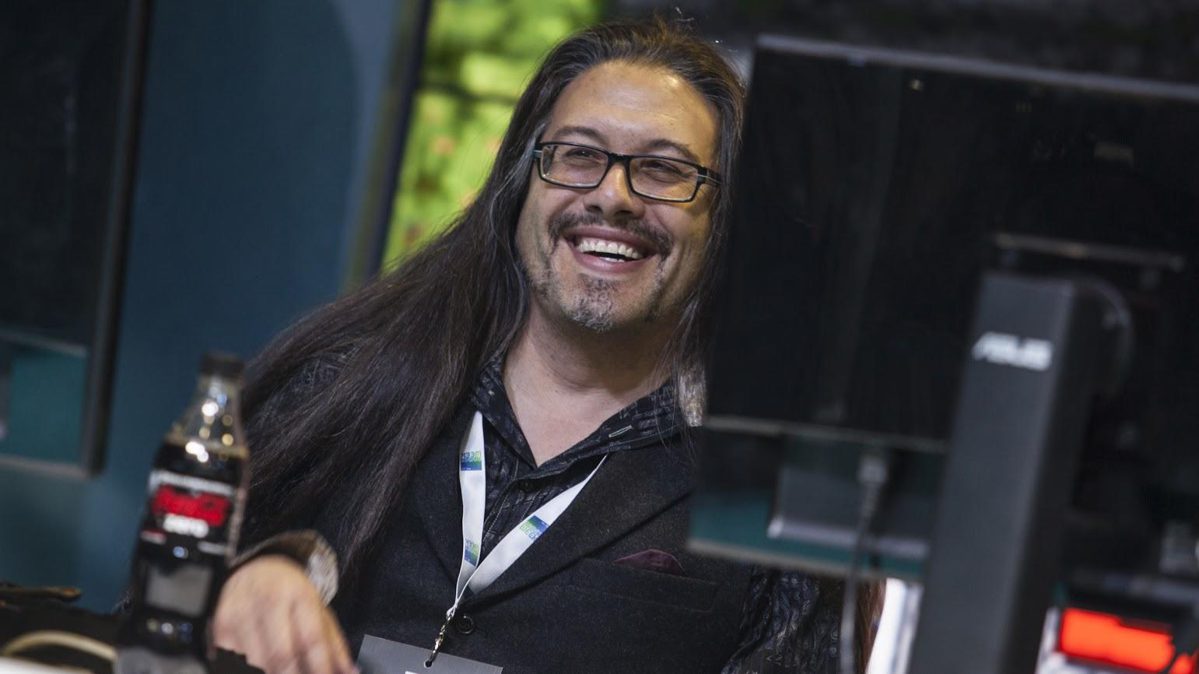 On May 23, 2000, all the pieces were in place: the superstar lead designer behind Doom, the game that defined the first-person shooter genre; a massive new company with potentially unlimited budget; and a team of hungry talent who were ready to shock the world. So how did Daikatana turn into such a disaster?

The confluence of talent that coalesced to form id Software in 1991 was a once-in-a-lifetime team. Programming whiz kid John Carmack was obsessed with squeezing every drop of performance out of the PC. Adrian Carmack (no relation to John) was a gifted artist who could make pixels explode. Tom Hall was a dual-threat designer/programmer with big dreams. And then there was John Romero, a long-haired workaholic overflowing with concepts.

Together, they knocked out genre-defining games at a breakneck pace. Commander Keen showed side-scrolling platforming could work on PCs. Wolfenstein 3D pioneered first-person shooting, and Doom transformed it into a nail-biting test of reflexes that would dominate the computer gaming market. But it wasn’t all smooth sailing. Hall left the company in 1993 during Doom’s production, unable to reconcile creative differences with Romero.

Romero and Carmack clashed during the development of Quake, and this time it was Romero who was shown the door, ostensibly for “not working hard enough.” But his reputation had already been made, and he reached out to Hall to try and start over. Their pockets flush with cash from signing a six-game distribution deal with Eidos, the two id alumni set out on their own in 1996 as Ion Storm.

Ion Storm was split into a pair of teams. Hall would head up a project at the company’s Austin office, a story-based shooter of futuristic espionage and player choice named Deus Ex. The larger Dallas facility, located in the penthouse suite of the 54-story Chase Tower, would tackle Romero’s Daikatana.

The company planned to have Romero’s game out the door in just seven months. It would use the Quake engine developed at id, which allowed for real-time 3D rendering of both enemies and environments. When he was still working on the game, Romero wanted to have Quake feature 3D melee combat, inspired by Sega’s arcade hit Virtua Fighter. That feature was dropped but would become a key element of Daikatana. It also boasted AI-controlled companions that you could work with to clear out enemies and solve puzzles, along with an epic storyline that criss-crossed through time. The hype was through the roof—this was Romero unchained, ready to show the world what he could do.

Six months later, the first of many bumps hit the road. id previewed Quake 2, which used a totally new engine that was leaps and bounds better than the first. Realizing that sticking with the old software would make their big game look dated, Ion Storm started from scratch. One problem, though: id was happy to let Ion Storm license the new engine, but they couldn’t start working with it until after the game was released. The end result? Ion Storm lost 11 months of development.

Things weren’t happy in the Dallas penthouse, either. The multi-million dollar office space had massive skylights that streamed sun onto computer monitors, forcing coders to set up black curtains to turn their cubicles into caves. Romero’s 400-page design document was seen as insurmountable, and employees began to burn out, get fired, or quit.

But this was an era of quantum growth in computer graphics, and when they dropped a demo in 1999, it had already been lapped by even more impressive-looking games like Half-Life. Even worse, Ion Storm’s demo of Daikatana at E3 that year ran at a dismal 12 frames per second—unforgivable at that point in the game’s development. The loss of lead programmer Steve Ash was the final nail in the coffin. Publisher Eidos, which had sunk $25 million into the game so far, wanted it done. It cut a deal to purchase controlling interest in the company, giving them firmer authority over the development process.

Finally, Daikatana limped to the finish line, three years late. The game was greeted with mediocre reviews and poor sales. Eidos needed to move 2.5 million copies of the game to make its investment back; it sold a little over 40,000 by September.

Not only did the graphics look dated, but many of the game design decisions were puzzling. Instead of allowing players to save anywhere, as had become standard for single-player FPS campaigns, Daikatana tied saving to a consumable item, with only three being able to be carried at once.

In addition, the AI companions, billed as one of the game’s key features, simply didn’t work right. They would ignore commands, get stuck on level geometry, and walk right into the line of fire. If they died, you automatically lost the level.

John Romero, once the golden boy of PC gaming, had become a laughing stock. The marketing of Daikatana hadn’t done him any favors. A notorious magazine ad that trumpeted “John Romero’s about to make you his bitch,” combined with John Carmack telling magazines that Romero’s work ethic was gone, had turned Romero’s public image from a hardcore gamer made good to a lazy, out-of-touch playboy.

Both Romero and Hall would leave Ion Storm the next year. They would start a new company, Monkeystone Games, that focused on mobile devices. At the same time, John Carmack was launching a controversial project at id—a remake of Doom, without Romero.

The end result, 2004’s Doom 3, left fans split. The game looked great—Carmack was still the king of cutting-edge engines—but it just felt wrong somehow. Without Romero’s frenetic imagination, Doom 3’s levels devolved into narrow hallways and frequent jumpscares, and hindsight has not been kind to it. For a while, it looked like that was how the franchise would go out, with its creators left behind like relics of a forgotten age.

It would be 12 years until a new Doom game dropped, after internal efforts at id to create a sequel landed in development hell. Carmack eventually left id, the last founder to do so, and a new team took over the project and brought it back to its prior glory. Now we once more anticipate new Doom games like we did in the 90s.

Romero kept busy, starting a number of studios and releasing titles ranging from web games to full-on MMOs. In 2016, he and Adrian Carmack teamed up to launch a Kickstarter campaign for Blackroom, the first FPS he had designed since Daikatana. Four days later, he cancelled crowdfunding, and the state of the game is unclear.

Overcoming failure, especially one that cost tens of millions of dollars and an entire company, is no easy feat. But in 2020, the kind of fast-paced FPS gameplay that id pioneered is once again back in favor. It’s hard to say what the landscape of shooters would be like if Daikatana had succeeded, whether we’d have seen the genre pivot away from fantasy and heavy metal to realism like it did in our timeline. But for all its flaws, it was a project born of love and passion, and you can’t get too mad at those.