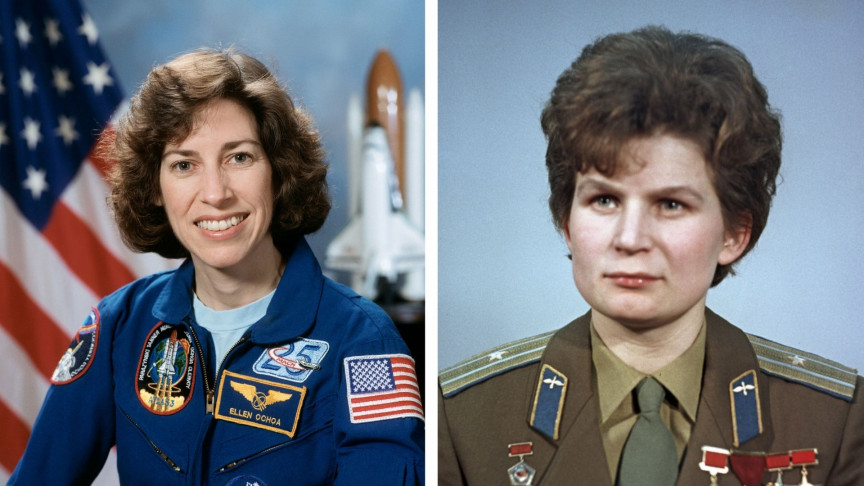 This is just one example of the challenges women in STEM fields have faced due to underrepresentation, sexism, and a lack of resources. Still, throughout history, women have overcome these challenges. They’ve racked up an incredible number of impressive firsts, discovered never-before-seen phenomenon, and ensured they had a place in the room where it all happens. Oh, and they finally got spacesuits that fit.

Here are the stories of 20 women who changed our understanding of space.

Katherine Louise Bouman is an American computer scientist working in the field of imaging. She was a member of the Event Horizon Telescope team that captured the first image of a black hole. Bouman started with the EVT team six years ago and worked tirelessly to develop the algorithms that allowed the image of M78 to be stitched together from the telescope network. Bouman joined the California Institute of Technology as an assistant professor in June 2019.

Katherine Coleman Goble Johnson (August 26, 1918-February 24, 2020) was an African-American mathematician whose calculations of orbital mechanics as a NASA employee were critical to the success of the first and subsequent U.S. manned spaceflights. Johnson broke race and gender barriers during her time with NASA. Her story inspired the 2016 film Hidden Figures.

The first woman in space was a Soviet cosmonaut with very little space or engineering experience. Valentina Tereshkova launched with the Vostok 6 mission on June 16, 1963. Prior to becoming a cosmonaut, Tereshkova was a textile factory worker and an amateur skydiver. She is the only woman to have completed a solo space mission, orbiting the earth 48 times. Tereshkova remained in the space program as a cosmonaut instructor and later graduated from the Zhukovsky Air Force Engineering Academy and re-qualified for spaceflight and as an engineer, but never went to space again.

Sally Kristen Ride was an American astronaut, physicist, and engineer. Born in Los Angeles, she joined NASA in 1978 and became the first American woman in space in 1983. She was the third woman in space after two Russian cosmonauts.

Following her career as an astronaut, Ride worked for two years at Stanford University’s Center for International Security and Arms Control, then at the University of California, San Diego as a professor of physics. She served as a member of the investigative committees for both the Challenger and Columbia space shuttle disasters — Ride is also known as the first and only LGBTQ astronaut, although this only became publically known after her death from pancreatic cancer in 2012.

Mary Winston Jackson (April 9, 1921 – February 11, 2005) was the first African American mathematician and aerospace engineer at the National Advisory Committee for Aeronautics (NACA), in 1958 was succeeded by the National Aeronautics and Space Administration (NASA). After 34 years with the agency, she achieved the highest status possible for an engineer at the agency. Jackson took a demotion to dedicate the final years of her career promoting the employment and advancement of both women and people of color to the agency. In 2020, NASA Administrator Jim Bridenstine announced NASA would rename its Washington, D.C. headquarters after Jackson.

Roberta Bondar was the first Canadian woman in space and the second Canadian astronaut. She flew on the Space Shuttle Discovery in January 1992. After her career as an astronaut, Bondar worked with NASA, researching the effects of space on the human body. She was also a passionate landscape photographer and combined her love of the various disciplines of science to also host various TV science shows.

In 1985, Chiaki Mukai was selected as one of three Japanese Payload Specialist candidates for the First Material Processing Test (Spacelab-J) that flew aboard STS-47 in 1992. She is the first Japanese woman to fly in space and the first Japanese citizen to go through two spaceflights. In addition to being an astronaut, Mukai is also a physician and has authored approximately sixty peer-reviewed scientific publications since 1979.

Liu Yang (born October 6, 1978) is a Chinese pilot and astronaut who served as a crew member on the space mission Shenzhou 9 — the first crewed mission to the Chinese space station Tiangong 1. On June 16, 2012, Liu became the first Chinese woman in space. The mission launched 49 years to the day after the first female space traveler, Valentina Tereshkova, launched with the Vostok 6 mission.

Mathematician Dorothy Vaughan worked as a “human computer” at the National Advisory Committee for Aeronautics (NACA), at Langley Research Center, which later transitioned into NASA. She became the NACA’s first black supervisor and helped the department transition to computers in the early 1960s by teaching herself and her staff the programming language Fortran. She said working for Langley during that era felt like being on “the cutting edge of something very exciting”. In 2019 Vaughan was posthumously awarded the Congressional Gold Medal.

Kitty Joyner was not only the first woman to graduate from the University of Virginia’s engineering program, but she also went on to become the NACA’s first woman engineer, getting her first job with the agency in 1939. She worked first for the NACA and then for NASA until her retirement in 1971, making significant contributions to research on aeronautics, supersonic flight, and airfoil designs.

Nancy Roman – AKA “The “Mother of Hubble” – was NASA’s first female executive, and served as NASA’s first Chief of Astronomy in the 1960s and 70s. One of the visionary founders of the US civilian space program, she earned her nickname for her key role in planning the Hubble Space Telescope. In addition to organizing the committee that set out the plans for the Hubble, Roman was also tasked with convincing Congress to fund the project. Roman made important contributions to stellar classifications and motions, and was an advocate for women in the sciences. In May 2020, NASA Administrator Jim Bridenstine announced that the Wide Field Infrared Survey Telescope would be named after Roman.

In an age when most of The National Advisory Committee for Aeronautics’ (NACA) female employees were confined to secretarial or administrative roles, Pearl Young was the first female technical employee. She was appointed as NACA’s Chief Technical Editor at the Langley Instrument Research Laboratory and continued in the role at NASA after that agency’s founding. After retiring from NASA in 1961, she taught physics at Fresno State University. One of her lasting legacies is the way NASA shares its information and research with the public.

In 1984, Svetlana Savistkaya of Moscow took one giant leap for women by becoming the first female to perform a spacewalk, cutting and welding metals for almost four hours during the Soyuz T-12 mission. She was the second woman to go to space and the first woman to go to space twice. She developed her love of flying from parachuting, and by her 17th birthday, Savistkaya already had more than 450 jumps under her belt. Her first space flight was in 1982 and her second was in 1984.

Jeanette Scissum was the first African-American mathematician to be employed by NASA’s Marshall Space Flight Center, after joining as an entry-level-mathematician in 1964. She worked at the center as a computer systems analyst and was responsible for analyzing and directing NASA management information and technical support systems. She fought for equality at NASA, even though fighting for others put her own career at risk at times.

Ellen Ochoa was the first Hispanic woman to travel into space, as part of a nine-day mission onboard the shuttle Discovery in 1993. The purpose of the mission was to study the Earth’s ozone layer. In 2013 Ochoa became the first Hispanic director and second female director of NASA’s Johnson Space Center.

Judith Resnik was the first Jewish person and second American woman to travel to space. While training for the astronaut program, she developed software and operating procedures for NASA missions. She served as a mission specialist in 1984 on the space shuttle Discovery, specializing in operating its mechanical arm, and logged 145 hours in orbit. Resnik died in the Challenger space shuttle explosion in 1986. Resnik has received many posthumous awards and even has a lunar crater named in her honor.

Kathryn Sullivan was a geologist and NASA astronaut who became the first American woman to walk in space in 1984. She once made a 3.5-hour spacewalk and spent more than 532 hours total in orbit. During the walk, she and David Leestma operated a system designed to show that a satellite could be refueled in orbit. In 1990, Sullivan returned to space aboard the space shuttle Discovery to help in deploying the Hubble Space Telescope. Two years later, she conducted experiments as the payload commander of the Atmospheric Laboratory for Applications and Science. In 2020, Sullivan became the first woman to dive to the Challenger Deep in the Mariana Trench.

In 1992, the engineer, physician, and astronaut Mae Jemison became the first black woman to ever travel to space. She served as the mission specialist on Endeavor, performing experiments in bone cell research. After leaving NASA in 1993, she would appear in an episode of Star Trek: The Next Generation and later founded The Jemison Group. This lead to the 100-Year Starship program, a project funded by DARPA that works to foster the research and technology needed for interstellar travel.

In December 2019 Koch set a record for the longest single spaceflight by a woman, with a total of 328 days in space. She has been selected as one of the crew members for NASA’s 2024 Artemis Program.

Meir worked for Lockheed Martin’s Human Research Facility, supporting human physiology research from 2000 to 2003. During this time, she also participated in research flights on NASA’s reduced gravity aircraft and served as an aquanaut for NASA’s Extreme Environment Mission Operations.