15 of the Largest Engines in the World 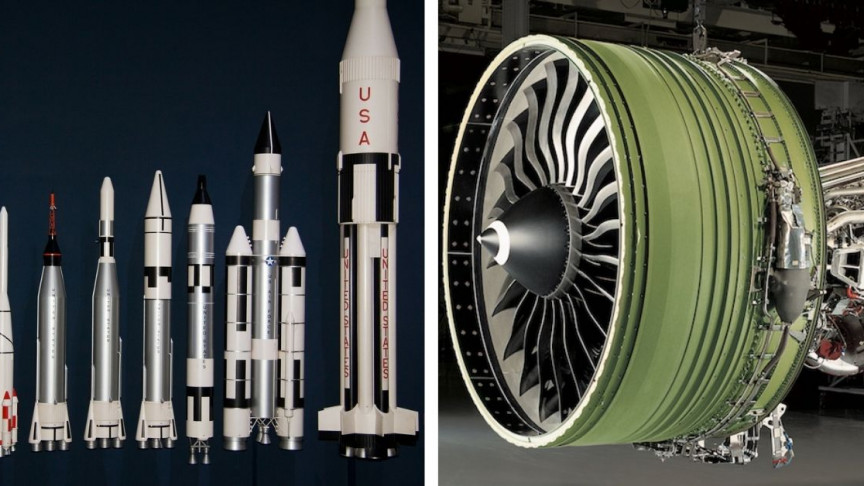 Welcome to our list of the largest engines in the world. Being such a catch-all topic, we have decided to choose both historical and current examples. Ranging from humble, land-based internal combustion engines to gravity-defying space rockets, the following list is an eclectic mix of old and new.

Some of these are truly amazing pieces of technology, others are historically important and have been included as honorable members in the club of these huge “beasts of burden.”

What are some of the biggest engines in the world?

And so, without further ado, here are some of the world’s most impressive engines of all time. This list is far from exhaustive and is in no particular order.

1. This is probably the world’s largest turbofan engine

2. This is one of the largest mass-produced aviation piston engines in the US

The last of the family, and the culmination of Pratt and Whitney’s piston engine tech, the war ended before the engine could be implemented and used in combat aircraft.

Eight of these beasts were used on the famous “Spruce Goose” H-4 Hercules, each producing 3,000 BHP.

With a name like that, you’d hope the engine can meet expectations. It certainly can, the 71-liter version had 28 cylinders, in a radial configuration and a power output of 3,500 bhp.

The Lycoming XR-7755 was and still is, the largest piston-driven aircraft engine ever produced. It was intended for use on the USAF “European Bomber” (which eventually became the B-36 Corsair). The project was canceled in 1946 with the USAF’s attention diverted to jet engines.

The turbine is based on Siemens’ direct drive technology and has fewer moving parts than comparable direct drive technologies. The head weighs less than 360 tonnes. Siemens states that the combination of robustness and low weight significantly reduces installation and maintenance costs, and increases lifespan.

According to Siemens, the motor benefits “from our unique offshore experience, the SWT-6.0-154 direct drive wind turbine is designed to exploit a broad range of offshore environmental conditions. Designed to IEC 1 standards, the SWT-6.0-154 can be deployed in any known offshore location. The 505 ft (154 mt) rotor, designed specifically for the Siemens offshore direct-drive turbines, has a swept rotor area of 200,208 ft2 (18,600 mt2), therefore maximizing energy yield at offshore locations, from inland waters with moderate wind resources to the most exposed offshore sites.”

5. This is the Largest (by length) steam locomotive engine

Built between 1941 and 1945, Union Pacific Railroad’s 4000 class were the longest steam locomotives built. Commonly known as “Big Boys”, for a good reason, the 4-8-8-4 articulated steam locomotives went out of service in 1959. They were replaced by diesel engines soon afterward.

6. Meet what was once the world’s largest diesel engine

Installed at the H. C. Ørsted Power Station in Denmark, the B&W CM 884WS-150 was the world’s largest diesel engine between 1932 and 1962. Truly monstrous, it was an eight-cylinder, two-stroke diesel engine.

The size of the engine is breathtaking, at nearly 82 feet (25 mt) long, 41 feet (12.5 mt) high, and weighing in at 1,400 tonnes. Its crankshaft weighs 140 tons alone and the entire engine consumes 40 tons of lubricating oil. While no displacement figure is available, the engine is said to be capable of producing 22,500 bhp.

Designed for use in nuclear power stations, the GE 1750 MWe ARABELLE turbine generator converts steam into electricity. The turbine blades weigh 176 pounds (80 kg) on their own.

According to GE, the “Arabelle steam turbines deliver power from 700MW to 1,900MW in both 50 and 60 Hz cycles and can be adapted to any heat sink conditions with a choice of low-pressure modules and types of last-stage blades. From its unique single-flow steam expansion design that improves efficiency to welded rotors and an independent LP exhaust design that lowers loads onto the foundation, Arabelle can meet the expectations of the most demanding nuclear power producers.”

8. This is widely considered the worlds largest rocket engine

At a total of 363 feet (110.6 mt) tall and 18.5 feet (5.6 mt) for the engine alone, The Saturn V rocket was the biggest ever made. It was powered by the F-1 engine, constructed by the Rocketdyne Division of Rockwell International. It had 1.5 million pounds of thrust and took the first astronauts to the Moon for six successful landing missions between 1969 and 1972 in the Project Apollo program.

Fully loaded with fuel, the Saturn V weighed 6.1 million pounds. The F-1 used a type of kerosene and liquid oxygen as the propellants, which were pumped at 42,500 gallons per minute by the F-1’s 2,500-pound turbopump.

9. This might be the largest car engine of all time

Two engines were originally built, with the first purchased by Russian Prince Boris Soukhanov in 1911, prior to the revolution. The S76 and its engine were then moved to Australia, where the car was fitted with a Stutz engine, but it eventually crashed in 1924. The second S76 was kept by Fiat and scrapped in 1920.

10. Here is the largest marine engine

Powering some of the largest ocean-going container ships in the world, the Finnish Wärtsilä-Sulzer RTA96-C is a magnificent piece of engineering. Consisting of a two-stroke turbo running on heavy fuel oil, it can be configured to operate on six to fourteen cylinders.

The RTA-96-C is the largest reciprocating engine in the world and is capable of producing 108,920 bhp. Its engine runs at 22 to 102 rpm and has a crankshaft weighing 300 tons. Consuming more than 39 barrels of oil per hour, it costs $34/minute to run!

11. This is one of the biggest locomotive engines of all time

Not by length, but this is a big locomotive engine in other respects. Nicknamed the “Big Blow“, this 83 foot long (25 mt), the 8,500bhp monster was truly an impressive piece of engineering. It used a three-car set-up. The first held the control cab and a diesel generator; the second, an enormous oil-burning ten-combustion chamber gas turbine engine; and the last held 24,000 gallons of fuel.

Built by Union Pacific, this engine was incredibly inefficient and was finally decommissioned in 1969.

12. This is a truly huge engine

Caterpillar’s 797 series of hauler trucks’ engines are another of the world’s most massive engines. These engines are used to power gargantuan haulage trucks, and the largest of the series, the 797F, is a very impressive piece of engineering.

It is powered by a 106-liter V20 turbo diesel engine that is capable of pumping out no less than 4,000 bhp. It is so huge that a single oil change consumes somewhere in the region of 178 gallons (675 liters) of oil.

13. Here is another enormous engine

The EMD 645-169 liter engine is another of the world’s biggest engines. Used in locomotives and hauler trucks, to name but a few applications, this engine is very powerful indeed.

It was, for example, used to power the massive 231 tonnes (now retired) Terex 33-19 “Titan” hauler truck. These engines have 16 cylinders, displace just under 170 liters, and can produce around 3000bhp at 900rpm. Not too shabby.

14. This might just be the world’s biggest commercial jet engine

The GE9X is widely considered to be the biggest commercial jet engine currently in operation. Built by GE, this engine has been specifically designed for use in the New Boeing 777X.

The engine currently holds the Guinness World Record for the highest recorded thrust of any engine in its class with a huge 134,300 pounds. It also happens to be around 10% more efficient than its predecessors.

15. This is the biggest surviving single cylinder beam engine in the world

And finally, this veteran engine is the largest of the surviving single beam engines in the world. Called the Grand Junction 100 Inch Engine, It was built by Harvey & Co of Hayle in 1869 and was used to pump water.

This engine was one of only six ever built from its factory in Cornwall, England. At around the time of its construction, about 70% of London’s water was pumped by Harvey engines.

This particular engine was used right up to the 1940s and was mothballed until the late-1950s.

So there you have it, our pick of some of the largest engines in the world.