11 Thrilling Cars To Drive on Land and Sail on Water 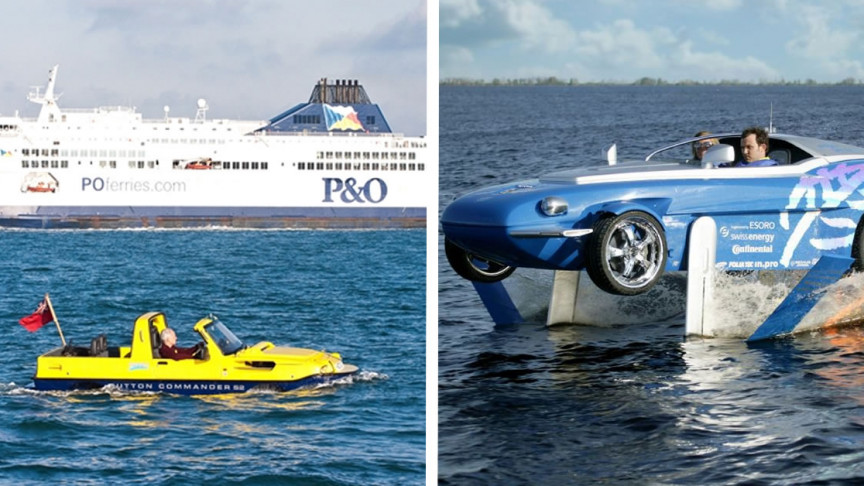 Like the water, but also fond of driving? Then you might want to consider getting yourself a car boat? Or a boat car?

What is an amphibious car?

Amphibious automobiles are a type of hybrid use vehicle that can, as the name suggests, be used as a means of transport on land and on (sometimes under) water. The term is generally applied to unarmed, recreational-use vehicles, rather than military amphibious vehicles, but we will include both later in the article.

While they reached the height of their popularity in the 1960s, amphibious cars have existed, in some form or another, since the start of the 20th-century.

After a lackluster early development, interest in the technology accelerated during the Second World War, with notable examples like the Schwimmwagen being developed — we’ll also come back to that later.

In more recent years, some companies have begun to build and market their own versions of car boats, with mixed success, at least for now.

What are some examples of notable amphibious cars?

If we have piqued your interest in amphibious cars, then here are some of the most notable examples of them in history. This list is far from exhaustive and is in no particular order.

The Schwimmwagen was a small 4 by 4 amphibious vehicle produced for the German army during WW2. Designed by Porsche, and built by Volkswagen, production began in the early-1940s, and they were widely used throughout the rest of the war.

So many were made, in fact, that it still remains one of the most mass-produced amphibious cars in history. Somewhere in the region of 30,000 were built, although only 189 remain registered today.

And only a handful remain in their original condition.

The vehicles’ bodywork was designed by Erwin Komenda, and they were powered using the same drive train as the Kübelwagen.

The Ford GPA, a modified variant of the Willys MB Jeep, was another iconic early amphibious car manufactured during the Second World War. Also called the “Sea Jeep”, or “Seep” for short, unlike the Schwimmwagen, it was never that popular amongst the American Armed Forces.

It was slow, very heavy on land, and lacked sufficient seagoing abilities to make it that useful in open water. It was inspired, in part, by the much larger, and much more popular DUKW amphibious truck, and somewhere in the region of 12,500+ were produced.

In the 1950s, a modified Ford GPA, called “Half-Safe”, was both driven and sailed around the world by the Australian adventurer Ben Carlin and his wife, on their honeymoon.

The Amphicar was one of the most popular recreational amphibious cars of all time. Technically called the Amphicar 770, it was first debuted in the 1961 New York Auto Show and was built in West Germany until 1965.

It was designed by Hans Trippel and was a descendant of the German Schwimmagen, and was built by the German company Deutsche Waggon-und Maschinenfabrik GmbH. Somewhere in the region, 3,780 were built and these provided only modest performance compared to most purpose-built boats or cars of the period. After being used in the water, 13 areas of the vehicle needed greasing, making it fairly high-maintenance.

The car appeared in several films throughout the 1960s and 1990s, and it is rumored that former U.S. President Lyndon B. Johnson once owned one personally.

Another notable car boat is the German-made Amphi-Ranger. Featuring a seawater-resistant AlMg2 hull, this rather expensive amphibious car was proven seaworthy even in Gale Force 10 storms.

Around 100, or so, were built, and testimonies from its owners attest to its capability and reliability at sea. Produced by the German Rheinhauer Maschinen und Armaturenbau company in the early-1980s, they were used by both private owners and some authorities, such as provincial police forces.

Propulsion was provided in the water by a rear-mounted propeller that could be retracted using an electrical motor. The front wheels provided steering on both land and sea.

During the 1960s and 1970s, kit cars became pretty popular in many places, including the UK. One company, Dutton Cars, decided in 1989 to branch out into the car boat market — as you do.

Their Mariner combined elements of a Ford Fiesta with lifeboat-inspired body parts, as well as, a water-jet propulsion system, to create one of the world’s first amphibious kit cars.

While not the most attractive looking thing, it was seaworthy and one even successfully made the crossing between Dover and Calais in 1995. The company has since developed a range of amphibious cars.

The aptly named Sea Lion was another car boat that was fairly capable on the sea and on land. It has a top speed of 290kph (180mph) on land and could even top out at 96kph/60mph on water.

This amphibious car was specifically designed to set world records and was built by Marc Witt, at a reported cost of $259,500. Its body mainly consists of CNC milled parts and TIG welded 5052 aluminum, with a monocoque and detachable side pods.

Swiss designed and built, the Rinspeed Splash is another interesting car-boat. Produced by the famous automobile designer, Rinspeed, this was a concept amphibious car that could reach 200 kph (124mph) on land, and up to 85kph (45 knots) on water.

Powered by a 750cc, two-cylinder engine, it also looked the part.

The SeaRoader Lamborghini Countach, created by Mike Ryan (of Top Gear and SeaRoader fame), was one of the most interesting custom amphibious cars. Modified for both land and sea, the car’s nose was lifted by a hydrofoil, for rapid water top travel.

According to Ryan, it was a nightmare of a build and featured some impressive and innovative engineering to make it work. For example. hydraulics were used to compress the suspension and pull the wheels into the wheels wells, ready for travel.

It even comes with a working smoke screen button — apparently.

The Dobbertin HydroCar was a one-of-a-kind amphibious car designed and built by Rick Dobbertin. With the flip of a switch, it could transform from land to water mode in a matter of seconds.

Resplendent in yellow, this car boat came with two articulated sponsons that ran the full length of the vehicle to provide buoyancy. On land, these sponsons were raised to act as the vehicle’s fenders.

It also looks pretty awesome too.

A limited production concept car in the early-2000s, the Gibbs Aquada was a highly capable modern version of the car boat. Designed by Gibbs Sports Amphibians, it could reach speeds of over 160 kph (99mph) on land, and 50 kph (27 knots) on the water.

Unlike its earlier predecessors, the designers did away with the idea of modifying either a boat or a car into the former, but rather, attempting to create a design to perform well in either mode. This was a real challenge, and 60 patents were awarded for the technical innovations its creators managed to achieve during the process.

It was powered by a 2.5L Rover V6 Engine, and one was used by Richard Branson to set a new record for crossing the English Channel in 2004.

The Aquada was produced in Auckland, New Zealand, and has since been succeeded by the Gibbs Humdinga (a tracked amphibious vehicle) and the Gibbs Quadski.

The Hydra Spyder is a U.S.-built amphibious car that began production in 2006. Produced by Cool Amphibious Manufacturers International LLC, it can seat four people and has a very capable 500 hp engine.

This car boat is very powerful and is claimed as being unsinkable by its creators. In the water, it can reach 46 knots/85 kph, and can on land reach more than 231.5 kph (125 mph).

Its lower hill is made of 5052 alloy aluminum, and its upper body is built of lightweight fiberglass. It can be driven on land as normal, and its wheels “tuck” into its body once it enters aquatic mode.

And that is your lot for today folks. Have we piqued your interest in boat cars? Why not check out your local secondhand dealers to see if you can take one for a spin, or swim?